Welcome back, brewers. This week, you’re getting a slightly different article. Considering that this is Brainstorm Brewery, I wanted to write a finance-related piece for once. Fair warning: I’m a player first and a financier second, but I thought it might be interesting to see how a player takes a look at finance. I also want to write generally and in doing so there will be exceptions to what I say (as is always the case with finance).

I’ve had my fair share of victories and defeats when it comes to the monetary side of MTG. When it comes to MTG finance, I think there are many different and successful paths one can take. I think it’s difficult for someone to talk about finance when not actually participating, and as such, I want to talk about two different approaches that I have taken and the outcome of each.

One approach is to take a look at cards from a new set and figure out which ones are really popular that no one is talking about. This is the approach that I took when Dragon’s Maze came out. I saw cards like [card]Voice of Resurgence[/card] (people were talking about this one) and [card]Advent of the Wurm[/card] and thought that the power level of these cards was very high. I started brewing decks, mixing these new cards with existing ones. I thought of how the metagame would exist with them. I built decks and played with them. I playtested and everything was going great. I saw [card]Scion of Vitu-Ghazi[/card] and the deck was complete. (Betcha thought you could make it through one of my articles without me mentioning GW Aggro, huh?) I was beating everything. I bought in. 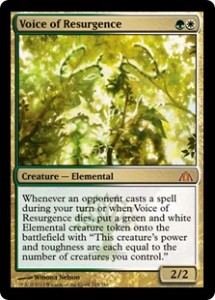 I was still fairly new to the speculation side of MTG finance, but I was hooked. I knew the power level of these new cards and no one else did.  I thought it was a slam dunk. I bought playsets of Voices for $25 to $30. I bought a playset of foils for $50 a piece. I bought [card]Advent of the Wurm[/card] at $5, convinced that it would be the next [card]Boros Reckoner[/card]-like spike. I bought plenty of [card]Loxodon Smiter[/card]s for $2. I bought Trostani. I bought [card]Armada Wurm[/card]. I bought foils of everything, convinced I broke the format.

I took the deck to FNM and I won. I tweaked it and I won more. I have never done so well with a deck before, let alone one that no one else was playing. I wasn’t even playing [card]Thragtusk[/card]! I was and still am convinced that Scion is just better. I played the deck at a classic and made top eight. The problem? No one else was playing it. I was speculating on cards that were definitely good, but no one was playing.  A lot of the green-white cards never really went up at all.

When trying to make money on a card, it doesn’t matter if you think it is good if no one else does.

Another technique I like to use is to check the price differences between MTGO and paper. As many of you know, prices fluctuate very quickly online. People are able to buy very quickly and then sell just as quickly. Oftentimes, looking at MTGO discrepancies is a way to see what the card in paper will do. Other times, cards in real life and MTGO just behave differently. But I still like to look at the MTGO market and try to figure out what will happen in paper.

I don’t claim to be an MTGO finance expert. In fact, I don’t often speculate online because of the fickle nature of the economy. But understanding how a card is behaving online will help greatly in understanding its paper prospects. Constructed players can see what decks are doing best online and relate that knowledge to paper events. We can see how different decks are set up. How many of each card is played. We can anticipate shifts in the metagame and which cards will benefit. This is a great tool to know because people who play online tend to favor aggressive decks which skews the format. Each shift is an opportunity to make money.

One of the easier ways I have found to use MTGO as a tool is to see which cards are overpriced compared to their paper brethren. MTGO tends to have less expensive cards in general, so when I see a digital card that has a much higher price than the paper version, I tend to take notice. Then I try to understand why the card is worth more.

If I find a suitable card I will look closer.

And on and on, but you get the idea.

Let’s take a look at some recent examples of cards that this technique recently worked for. 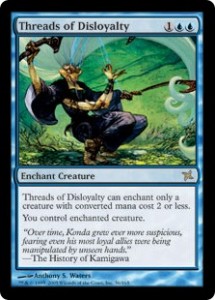 Several months ago, when Theros was just released, there was a little card named [card]Threads of Disloyalty[/card] that hit my radar. Modern decks were playing it as a way to take the best creatures in the format. Nothing was safe from the blue mage (at least with a mana cost of two or less). That Tarmogoyf is mine! That Dark Confidant is mine! Basically all the best creatures in the format could be stolen away. At the same time, blue decks seemed to be gaining in popularity. The card was around 18 tix online, but in real life, copies could still be purchased for around $5. I remembered playing against it back when it was Standard legal and it was annoying then. The card seemed to be the real deal—a good answer. I assumed that no one was paying attention to Modern at the time and associated that with the price discrepancy. I decided to pick up a few playsets, even though no one was talking about them at the time. The card caught on in a big way. 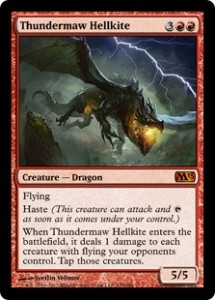 A more recent example was influenced by the latest bannings and unbannings in Modern. I missed the boat on the more obvious specs, deciding to sleep that night instead of waiting up and buying in. I waited a few days, watching all the blue/black stuff go up in price, and elected to try my luck with the tier-two specs: cards that would be affected if tier-one cards got big. I checked the prices online for a few cards and noticed a large discrepancy between the 20 tix that MTGO was requesting for [card]Thundermaw Hellkite[/card] and the $8 to $10 real-world price tag.

I really liked this card for four reasons:

4)      I had previously seen a Jund deck that played this and [card]Lotus Cobra[/card]. Since Jund just lost [card]Deathrite Shaman[/card], it would be looking for a new shell to play with and I thought that this could be a good way to adapt.

I ended up getting several playsets locally for around $8. I also cashed in some online store credit, picking up nine more copies. Shortly after, the card started to move. It didn’t spike, but it has made slow gains and is currently up to about $15 TCGplayer mid. We will have to see what the Modern format has in store to see what happens next for [card]Thundermaw Hellkite[/card].

Using this system, let’s take a look and see if we can find a new spec target. I browsed and I saw a large price difference between [card]Geist of Saint Traft[/card] on MTGO (at about 28 tix) and real world at about $18 [Ed. note: at the time of this writing. Geist spiked to $18 over PT weekend]. Taking a look at the potential for Geist, we see: 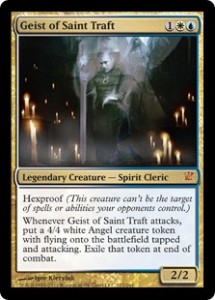 4)      The card is affected by the bannings as well and could be played in some versions of Zoo.

5)      The card appears to have bottomed out, but is already starting to rise.

The time may have passed to buy in deep, but this is a prime target for trading.

[card]Past in Flames[/card] is another card that could see a large increase in price for paper. The card is: 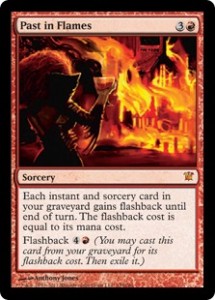 So there you go: two very different approaches that a competitive player can use to help determine which cards could go up. I think both can be successful. Use your skills at evaluating good cards for Constructed and apply them to the finance game. Seeing as this is my first finance article, feel free to leave some comments or criticism below. Thanks for reading. I will be back next time with a look at GW in the new standard. Can we survive even with Karametra as our god? Find out next time.

@RyanArcherMTG     -     Email     -     Articles Ryan Archer is a PTQ grinder and a Magic financier. When he's not making top eight in a tournament or looking for the next card to spike, he's playtesting as a member of Team RIW or writing articles for BrainstormBrewery.com or MTGinfosource.com
Previous Episode:
The Spike Feed #26 – An Evening at SCG St. Louis
Next Episode:
Standard Commander Gatecrash Archetypes and Example Decks (Part 2)