Welcome back to Serum Visions everyone!

It’s been a busy time in the craft beer/home brew world of my home town, Winnipeg. We recently had the inaugural Half Pints Pro-Am Brew Challenge  (both professional and amateur brewers can enter), hosted by our local home-brew club, the Winnipeg Brew Bombers (WBB), named after our CFL football team, the Winnipeg Blue Bombers. The competition was a monumental success! It had just over 400 entries, which is amazing for a first-time competition. The WBB brought in all the best judges from Western Canada and they had nothing but great things to say about the how the event was run. The winning brew was a spruce-tip-infused beer by a brewer from Saskatoon, Saskatchewan. I would describe it as a rogue beer, bringing up images of John Loucks winning a PTQ with a rogue [card]Kiki-Jiki, Mirror Breaker[/card] build, but there is a popular brewery called Rogue from Oregon and this brewer does not work for it.

I decided to write on this topic this week because I was encouraged to enter the competition by the Vice President of WBB (@Phillips_Global). I heard about the event when it was originally announced, but I wasn’t too concerned about entering. It seemed like every person I knew was asking me if I was going to enter, and I responded to all, “No, that’s not why I brew beer.” But eventually I was convinced, and after having gone through the process and the excitement of it all, let me tell you, I’ll be mailing my beer across the country to enter other brew contests. What’s so cool about it? Let me explain with an MTG metaphor.

Making your beer is like building a deck. The first time you build one, you’re probably going to end up with an 86-card pile that runs triple-red costed spells that you think are good because you’ve got three Mountains in the pile! This is similar to what my first beer was like, an absolute disaster. (Incidentally, my first deck was a precon, the M11 blue starter with a foil [card]Stormtide Leviathan[/card], and it’s still probably my favorite deck ever.)

Once you learn enough about brewing, you’ll start making beer that people will happily drink and enjoy. This is like FNM – it’s fun and enjoyable, but it doesn’t mean you’re good enough to compete at a GP. Before this competition, this is where I was at in the beer-making world.

Since I hadn’t really planned on entering a beer, I entered one already in the brewing process that had just started carbonating in the bottle. It was meant to be a Cascadian dark ale, or black IPA, but my friend and I were a bit tipsy by the time we were adding the final water to the carboy and we added two extra liters. So It went from being a CDA to a dark version of an APA. That’s not all bad though, because it meant we had two liters more beer! It was, however, detrimental for my grading in the competition. I’ll explain the mechanics of how a beer judging goes so you’ll understand why.

How Beer is Judged

The whole process starts out with an organization called the BJCP, Beer Judge Certification Program. This is basically the equivalent of Magic’s DCI. The BJCP trains judges and there are different levels of judges depending on experience. One neat thing is that a judge can enter a competition in which he or she is judging, meaning a judge can make his beer and drink it too! So what the BJCP has done is set out a document called the BJCP Style Guide that describes each type of beer that will be judged. There are are 23 main categories and most of those have subcategories. You can find a link to the style guide here.

Here’s an example of how one would classify a Guinness:

13A. Dry Stout (which incidentally is the style of the week. Read these notes and then go check out some local versions and see how they stand up to the BJCP)

Aroma: Coffee-like roasted barley and roasted malt aromas are prominent; may have slight chocolate, cocoa, and/or grainy secondary notes. Esters medium-low to none. No diacetyl. Hop aroma low to none.

Appearance: Jet black to deep brown with garnet highlights in color. Can be opaque (if not, it should be clear). A thick, creamy, long-lasting, tan- to brown-colored head is characteristic.

Flavor: Moderate roasted, grainy sharpness, optionally with light to moderate acidic sourness, and medium to high hop bitterness. Dry, coffee-like finish from roasted grains. May have a bittersweet or unsweetened chocolate character in the palate, lasting into the finish. Balancing factors may include some creaminess, medium-low to no fruitiness, and medium to no hop flavour. No diacetyl.

Mouthfeel: Medium-light to medium-full body, with a creamy character. Low to moderate carbonation. For the high-hop bitterness and significant proportion of dark grains present, this beer is remarkably smooth. The perception of body can be affected by the overall gravity with smaller beers being lighter in body. May have a light astringency from the roasted grains, although harshness is undesirable. 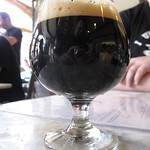 This is only half of the style guide, but for the sake of word count, it’s the “important half.”

Judges go through years of training to understand what each beer descriptor means so that they can objectively judge a beer on its merits rather than on how much they enjoy it. Each judge is assigned a style for a judging session, and each style is assigned to at least three judges. So, every beer will be tasted by three judges who will all score the beer individually. They get served the beer in a small, clear plastic cup with one to two ounces of beer per sample. If they were judging a Guinness, they would consider how it compares to the other entries with regards to aroma, appearance, flavor, and mouthfeel, finishing with an overall impression. Each of these categories is assigned a certain amount of points and you get a final score out of 50. The judges need to be within seven points of each other – if they are more than seven points apart, they discuss the beer and then adjust their scores. However, considering all three judges scored me at 19/50, I am pretty confident in their objectivity and accuracy!

So How Did It Go?

There was one gentleman there who is basically the Reid Duke of the Canadian home-brewing scene – there was actually one category where he won all three medals. I stopped counting how many medals he won somewhere after ten. A home brewer like this will end up entering 15+ beers and just shoot to win as many as he can. Last year he was named by the BJCP as the winningest brewer in the country!

So, if you’ll recall, I topped up my beer with two liters too much water. What does this do to a beer? It [card]goblin grenade[/card]s it so far out of its category it’s note even funny. In fact, it’s down right depressing. The beer is good – I have gotten lots of compliments on it from a couple of proper beer snobs – but it was just not to style. Therefore, it couldn’t possibly score very well. I have come to describing it like this: “I entered a good pink painting into red painting contest.” It just had no chance.

There is a light at the end of this tunnel though! This is beer, not Magic, and beer falls into the grocery line of my budget. If Magic did too, I’d be playing in GPs, but my wife and I wouldn’t be eating. I certainly plan on entering more competitions, but next time I’ll do it proper. And I’m gonna win!