Hello everyone and welcome back to Serum Visions!

Well, actually, at the time of this writing it’s still Advent, but I 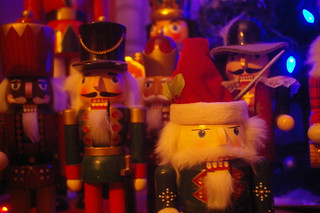 went to the Royal Winnipeg ballet doing Tchaikovsky’s The Nutcracker last night and it sure is starting to feel like Christmas. And since I am writing for the future, Merry Christmas!!

Nothing says Christmas in the MTG community like the Holiday Cube. My goodness, I am so happy for twitch.tv. I have been watching so much cube streaming these last few days, it’s silly. I saw DZYL draft some absolute joke decks. There was the classic turn-one [card]Ulamog, the Infinite Gyre[/card] off of a [card]Black Lotus[/card] into [card]Channel[/card] opening hand. But what he didn’t do is play the [card]Karn Liberated[/card] that was also in his hand because it would have opened him up to losing to a turn one [card]Lightning Bolt[/card]. I’m not sure about you, but I would have gone for it! And the other deck that sent his sacred bell dinging (every time something goes his way he dings a bell) was his [card]Crucible of Worlds[/card]/[card]Strip Mine[/card]/[card]Wildfire[/card]/[card]Burning of Xinye[/card]/[card]Tanglewire[/card]/[card]Smokestack[/card]/[card]Rishadan Port[/card]/[card]Maze of Ith[/card] deck. It went 6-0, not even close, except for one close game where he beat a turn-three [card]Blightsteel Colossus[/card]. The deck was absolutely soul crushing. There was not a single bad draw during the whole six games. Merry Christmas.

Okay okay, I just needed to get some ridicupants cube stories out there to help bolster my other series. On to the beer.

I’ll start with a little history, then discuss some of the style, and finish with a recipe, which will be our style of the week!

If I ask you to picture a beer in your mind’s eye, chances are good that you’ll see brown bottle or a can of lager with some condensation dripping down the side. 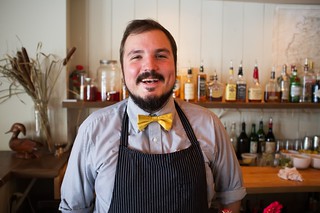 Depending on how much football you watch, you might see some rather attractive females surrounding that beer, but that’s a whole other topic. If we were living a few hundred years ago, you would be instead be picturing a room temperature mug of ale being served to you by a bearded, jolly bartender in a tavern. The advent of lagers and artificial refrigeration contributed to the demise of the hot beer. Here’s how.

Before we had effective sanitation and refrigeration practices, there was a much higher chance of something undesirable getting into beer and giving it an infection, making it taste less than perfect. It’s important to note that infection is not necessarily a bad thing and is often sought for certain types of beers. We also need to know that not all infections are created equal. Some are described as smelling like rhino vomit that has sat in the sun a few hours, and others are not so bad, like lactic, which can give a very clean tart flavor to the beer. If a beer is not infected by the former it can still be very drinkable.

One solution (often used in the 1600s) to masking the slightly undesirable flavor was heating and spicing the beer. This is very similar to mulling wine, except you’re using beer. The most popular version of a mulled beer is called Wassail. It’s named after a celebration for the health of the apple trees from Southern England. While doing research for this article, I found that the most popular version of Wassail seems to be Lambswool.  It blends the pulp of six apples into the spiced and heated beer and it creates a beautiful froth on the top of the cup that looks just like the wool of a lamb! However there are many versions of Wassail and it does not seem to have a definitive form. I’ll supply you with the two most popular preparations and you can decide for yourself which one you like best. 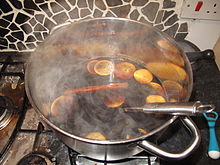 Recipes for this are greatly varied but there are some constants.

For the beer, use a brown or strong ale, and make sure it’s more malty than hoppy—this is not the time to embrace your inner hophead. A brown ale or a strong ale will work well. I haven’t seen any Belgian mulled beers so try and keep it American or British. I would look for a beer around 5-6% ABV (or more) with good malt character.

For the spices, use your favorite blend of Christmas spices: Cinnamon sticks for sure, nutmeg, clove, ginger, mace, allspice. The key here is to keep it light and make sure to start with a little and add extra if you’d like to taste them more. A good guide is to try and use around a teaspoon total per pint of whatever spices you decide to use .

Add some sugar—it seems like a tablespoon per pint is a good measure. You can use any type you like: honey, agave, brown sugar, whatever.

You may want some extra booze. Add half an ounce per pint (or more) of spiced rum, whiskey, Irish whiskey, or brandy. You could try gin, but leave vodka out of this one.

Finally, you’ll want s slice of citrus for garnish, either orange or lemon.

Mix everything but the citrus together in a pot. Bring to just below a simmer and take the pot off the heat and let it sit for five minutes. Ladle into a mug, add the slice of citrus, and enjoy!

And for the foodies in the crowd…

1. Roast the 6 apples for an hour at 250 degrees until soft and pulpy—the flesh should peel easily away from the skin.

3. Add spices and the rest of the beer, keeping just below a simmer for a couple minutes.

5. Separate the pulp from the skins of the apples and and blend the flesh smooth, you want no lumps in the final product.

6. Add the apple purée to the pot and let it steep for 30 minutes. Do not let the beer simmer on the fire at this point.

7. After 30 minutes, whisk vigorously or blend with a hand blender. If you mix long enough, the apple will froth up and look just like lamb’s wool.

8. Ladle it out into a tulip or stein and enjoy.

When you make one of these recipes this holiday season, shoot me a pic on Twitter @awcolman. You’re really going to love these drinks, and if you come up with or already have your own version, post it in the comment section because I would love to try some other recipes!

Please keep in mind that when alcohol is warmed it is absorbed into the body considerably faster than normal. Enjoy and drink responsibly. Please please don’t drink and drive this holiday season.

Merry Christmas and as always thanks for hangin’.