Burn-ninating Your Opponents in Cube 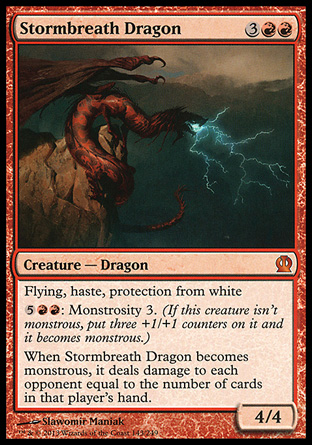 Welcome back, brewers. I know I write a lot of articles to make you a better Magic player. These articles are often focused on playing better, understanding your outs, and grinding out matches to understand what cards are important. I love to play this way. I love to learn and get better with a deck. But every once in a while, it’s nice to sit back and have fun for no other reason than you love Magic. This, ladies and gentlemen, brings us to the Cube format. Others have talked about what cubing is, so I won’t bore you with explaining it again. Just know it is a drafting format where you play with the most powerful spells in Magic history. There are very few formats where you will see a [card]Wall of Roots[/card] equipped with a [card]Skullclamp[/card]. You hardly ever see a super friends list with [card]Ral Zarek[/card], [card]Jace, the Mind Sculptor[/card], [card]Ajani Vengeant[/card], and Chandra, but it happens in Cube. Magic is all about having fun. 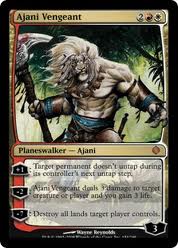 This week, I was fortunate enough to be able to draft a cube and I wanted to do a quick report about this awesome way to play Magic. Some things you need to know: People generally want to play midrange and control decks because of all the interactions and combos that can happen in Cube, but that means that one or two aggressive decks at the table can be very powerful. My cube is fully powered and plays all the best, most powerful spells in Magic, including [card]Black Lotus[/card], [card]Ancestral Recall[/card], [card]Moat[/card], [card]Mana Drain[/card], [card]Jace the Mind Sculptor[/card], [card]Demonic Tutor[/card], [card]Survival of the Fittest[/card], and… er… [card]Lightning Bolt[/card]? Sorry, red. Let’s quickly go through the draft portion. My first pack is very mediocre for such a powerful cube. I end up first picking [card]Thundermaw Hellkite[/card]. The next pack reveals one of my favorite cards, [card]Bloodbraid Elf[/card]. A red-green midrange deck sounds good, or so I thought, as the next few picks reveal some very good one-drops. [card]Greater Gargadon[/card], [card]Rakdos Cackler[/card], and [card]Wild Nacatl[/card] join the team. We round out pack one with some good burn and a few mana fixers. Pack two opens up with a [card]Black Lotus[/card]. “Don’t mind if I do,” I think to myself. The next pack we pick up [card]Skullclamp[/card]. We round out the deck with more of the same. Some (seven, to be exact) excellent burn spells, a few more four-drops including [card]Masticore[/card], [card]Flametongue Kavu[/card], and [card]Hero of Oxid Ridge[/card]. Plus at least eight one-drop creatures. We are solely lacking in the two- and three-drop spots, only finding a [card]Keldon Marauder[/card], [card]Manic Vandal[/card], and one other two-drop. But that’s okay as the plan quickly becomes apparent. One-drop, followed by one-drop, one-drop, followed by burn spell, followed by four-drop, followed by the next game.  We had to make some difficult decisions when deck building, but ultimately decided five-drop Chandra needed to stay on the bench. 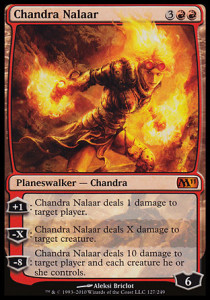 We are playing against an opponent who was fortunate enough to draft the super friends planeswalker deck. He was on three colors and his deck had some very powerful cards, including [card]Jace, the Mind Sculptor[/card], [card]Ancestral Recall[/card], and [card]Wrath of God[/card] (must be nice). I open up game one with a quick start of three one-mana guys. He’s a little slow but is eventually able to deal with my guys with his own burn. He drops a planeswalker, which I have to burn out. He then drops another one and starts to gain some incremental advantage. I slowly start to lose and can never really recover. Game two is much better for me. I cast turn-one [card]Thundermaw Hellkite[/card] which does some damage before my opponent can send it on a [card]Journey to Nowhere[/card]. I am able to cast several more creatures, including [card]Bloodbraid Elf[/card], and my opponent is overwhelmed. Game three starts the same game one, but I am able to hold on and deal a sizeable amount of damage before my opponent is able to cast balance and wipe away my whole team. A [card]Jace, the Mind Sculptor[/card] the next turn is not enough to save him, because I have enough points of burn in my hand. The match is over.

This time we are playing against a very grindy green-black deck. His deck included tons of black removal, [card]Primeval Titan[/card] to go get [card]Volrath’s Stronghold[/card], as well as some other cute lands. His deck also included the all-star enchantments of [card]Survival of the Fittest[/card] and [card]Recurring Nightmare[/card]. Each of those are a first pick in my book, but both… jeez. The first match opens up with me being offensive again. I get stuck on three lands and can’t seem to cast my four-drops.  Luckily, my opponent seems to be flooded. Not being able to mount an offense, I am forced to use two burns spells on a Primeval Titan, and another one on Ob Nixis. Eventually, I draw some land and start casting four-drops. My opponent has played a land every turn of the game and is left with twelve cards in his library, with sixteen of seventeen lands in play. He drops one more creature, and if he attacks with it, I’ll be dead next turn. Like a luck sack, I rip the burn spell off the top to finish him off. Game two is a little less exciting as we both trade off resources early, but I draw a good mix of lands and spells and am able to start casting my four-drop creatures. [card]Flametongue Kavu[/card] kills his only creature and a hasted Hero of Oxid Ridge later, we are off to the finals. 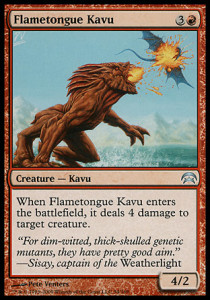 The third round start off with us playing against a blue-black control deck. He has a lot of removal and permission in the form of [card]Mana Drain[/card] and Venser. We are on the play and again are able to turn one cast [card]Thundermaw Hellkite[/card] off [card]Black Lotus[/card]. It is only able to attack once, however, as he has [card]Snuff Out[/card] ready after his turn. I am able to keep playing threats and eventually can burn him out. The second game played out much like the other games. Because the deck has a lot of redundancy, I really felt like I was playing a constructed deck. So many one-drop creatures meant I was always able to pressure my opponent early and they always felt like they had to react instead of playing their game plan. Cube drafting is one great experience it combines the fun and randomness of drafting with the power of a constructed deck. If you haven’t yet tried it, I strongly urge you to do so. Thanks for reading.

@RyanArcherMTG     -     Email     -     Articles Ryan Archer is a PTQ grinder and a Magic financier. When he's not making top eight in a tournament or looking for the next card to spike, he's playtesting as a member of Team RIW or writing articles for BrainstormBrewery.com or MTGinfosource.com
Previous Episode:
Brainstorm Brewery #120 – #Ray4Rookie
Next Episode:
Commander 2014: A Financial Review