Welcome back, readers! Well, hopefully I still have a readerbase after last week’s article. If you’ll read last week’s Reddit thread for the article, you’ll see that several people brought up very valid arguments against my theory, and slapped me with some issues that I had left out. It’s enough for me to accept the possibility of an Onslaught reprint in a core or fall set in the next couple years. The huge reply to the piece was a good example of how I genuinely appreciate feedback on my writing and my opinions. Just because I write for this website doesn’t make me better than anyone else than this, and none of my opinions are immune to criticism. Thanks to everyone who provided reasonable input on the topic of fetch land reprints.

Now, onto this week’s subject. For those of you who don’t have a Facebook account, this article will be less useful to you than it would be to those who do. Many moons ago (i.e. only a few months ago), I wrote a “Finance 101” sort of piece, listing your various outs for when you acquire a card and want to turn a profit on it, whether by trading up or selling out. One of the listed outs was social media, including Twitter, Facebook, etc. all in one lump. Today I want to go in depth into Facebook specifically, and look at some of the larger groups that players have come up with to trade, buy, or sell cards over the internet and through the mail. We’ll go over what each group specializes in, some of their basic rules and etiquette, and how you can go about being a part of the wonderful world of internet trading. Having a local Facebook MTG group to buy and sell cards from is great, but having access to a half dozen more across the world can’t hurt your profits too much, can it?

[Editor’s note: Much as it pains me, I’m not going to correct these group titles, since that may impact readers’ abilities to find them. These are listed exactly as they are in Facebook.]

Do you ever feel pretty good about the amount of Magic cards you own? Are you proud of a specific card in your collection? Do you want that feeling to abruptly stop and sink to the bottom of your stomach? Look no further than the Facebook group, “High End Magic stuff for sale!” where the cover photo is dozens of [card]Black Lotus[/card]es placed on the floor to create a message spelling out “Not High End?” If you’re the lucky one who picked up a NM [card]The Tabernacle at Pendrell Vale[/card] out of a Craigslist collection, this is a great place to unload it. The group is full of some of the most famous collectors in the community who have amazing reputations. And the folks here have the money to spend on foil, upside down, miscut, Klingon [card]Brainstorm[/card]s.

However, it’s definitely not the place to post a list containing a dozen copies of each shock land. It’s stated in the rules of the group (which you should always, always read if you intend to engage in business while using one of these groups as an outlet) that posts containing sub-$50 cards will usually be removed. This is an example post for what you can expect to see on the group: 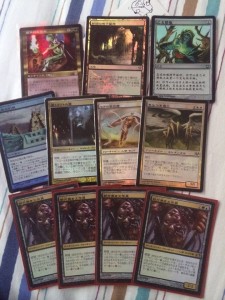 Some groups disallow auctions. This is not one of them, and that can work in your favor. Collectors who are looking to acquire the weird and rare cards of the universe may tend to aggressively outbid each other if you have something that’s hard enough to come by. This group also asks that with every post, each card (or whole item, like a deck) comes with a listed price. Whether that be a firm price, an “or best offer” situation, or a starting bid, posts just asking for offers will be deleted. If you don’t know what your foreign foil gem is worth and you can’t find it anywhere else on the internet, give this group a try:

I just joined this group myself while searching for additional content to include in this article. Although it doesn’t look too terribly trafficked, it’s still something that doesn’t hurt to have in your back pocket for when you pick up a strange foreign/foil/promo card that doesn’t have completed listings on eBay. You won’t sell any cards in this group, but it’s helpful if you can receive a fair price quote on the Russian foil [card]Glissa, the Traitor[/card] that you own and someone else in your local community wants.

Magic: The Gathering misprints and oddities

Similar to the high-end group, you won’t be finding cheap stuff here. The group is stricter than you might be on what should be allowed to be posted. If your [card]Charging Badger[/card] is slightly off-center, don’t freak out and upload a picture. It says in the rules document of the group: “Is your card miscut? Great! Does it show a part of another card? No? Don’t post it.” Even if you don’t buy or sell a whole ton of misprinted cards, it’s good to have an outlet in case you pick something unexpected up in a collection. You can also learn a lot about the value of misprints and miscuts by simply watching posts and conversations. I’m awful at telling the difference between 4th Edition and Alternate 4th, and probably wouldn’t spot something like Dark Beta at first glance.

If you want to learn more about the world of misprints, miscuts, and other alternate printings, I recommend following themisprintguy on YouTube. He knows what he’s talking about. 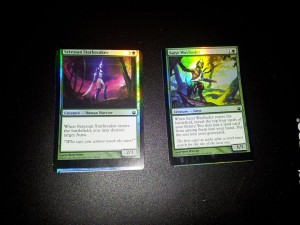 Here’s a couple examples of misprints someone might be interested in on that group. Yes, they’re commons, but they’re also foil and showing other cards.

This is the largest Facebook MTG group that I am a part of, and it is by far my favorite to sell from. The group holds every single type of player, from beginning casuals to competitive Legacy enthusiasts. There’s something for everyone here, and there are a lot of great people active in the group. You can easily find that sweet spot between immediately buylisting and waiting forever for an item to sell on TCGplayer. As a bonus, you can earn some “good person who goes on the Internet and doesn’t scam you” points as well.

The group recently cleaned up all of the posts that were not related to buying, selling, or trading, so if you previously left the group due to the posts that looked like, “OMG I just pulled a god card, guys!” I highly recommend you rejoin. All of the non-finance discussions have moved to a separate sister group (MAGIC THE GATHERING discussions, if you’re interested), so the only posts left are those of cards waiting to be bought, sold, or traded. It’s a great place to pick cards up at slightly lower than TCG low (although some people try to sell firm at TCG mid, they don’t get far) for decks that you need, and almost everyone in the group (in my experience) trades at TCG mid. Remember that in this group, asking for a gift or an extra percentage to cover the PayPal fee is strictly prohibited, unlike in other groups.

That’s definitely not all of the MTG Facebook groups you should be a part of, but I’m running low on words and want to cover a few other things. For all of these groups, remember to protect yourself while conducting business. Facebook MTG in general uses a reference system, so only send first if your partner has a sizable list of people to back up his or her honesty. It’s not worth it to risk losing cards or coin on something that looks like a sweet deal, but could very well be too good to be true. If you feel something isn’t right with your transaction, I highly recommend contacting  Onar Bargior (on Twitter as @Bargior). He is an admirable crusader against the numerous scumbags who try to rip others off, and he has a large collection of confirmed scammers’ names to cross-reference against.

As always, I welcome your feedback and responses. Since I can’t cover everything within my word limit every week, I often tend to leave out something—that’s where you come in! What groups do you find helpful in your Magic financial pursuits?

[card]Eidolon of Blossoms[/card] seems like a strong pickup moving forward into rotation. I don’t think you should go out and buy out TCGplayer right now, but get them if you need your set for Standard. It still probably won’t make [card]Mana Bloom[/card] playable, but green and black have proven to have a very strong constellation shell, and the colors have enchantments that are good on their own, like [card]Courser of Kruphix[card] and [card]Herald of Torment[/card]. Eidolon has a promo version, but so did [card]Supreme Verdict[/card] and [card]Sylvan Caryatid[/card], and they’re still financially relevant.

@Rose0fthorns     -     Email     -     Articles Douglas Johnson is a 20-year-old MTG player who goes to college courtesy of a scholarship from Gamers Helping Gamers. He is currently found writing a weekly finance column at MTGprice.com, and you can always feel free to contact him on Twitter, Facebook, or Reddit.
Previous Episode:
Unified Theory of Commander: Mana Follow-Up
Next Episode:
Brainstorm Brewery #100 – The Promised Land

One comment on “Conjured Currency #16: “Lik Dis If U Buy Evertim””