Throughout the first few weeks of a set’s release, there is one single question that every single well-known financier is asked to no end. While the exact words might vary each time, and the specific card in question will differ, there’s few general models to this tricky question:

Unfortunately, that’s a difficult question to answer. It would be impossible for them to tell me everything for me to assess their exact situation and make a decision. I would have to know their exact degree of wanting the card (or the money they could obtain by selling the card), how often they plan to play with the card in the immediate and long-term future, their financial situation, and how much utility they got when playing (or holding onto) the cards.

This week, I’m going to go over a few examples of how everyone’s situation is different, and focus a bit more on the difference between “needs” and “wants.”

Although it would be an interesting concept, there is no business that allows a player to rent Magic cards for weeks or months at a time with a payment plan model. There are multiple issues with condition, risk of the card being stolen, and countless other problems. Not even SCG could keep track of that type of system. However, if you’re a Standard player looking to get into the new set, you can theoretically rent the cards you need for the first few weeks of the new season. Let’s break this down a bit.

Ryan intends on playing four copies of [card]Soulfire Grand Master[/card] in Standard Jeskai Burn at his weekly FNM every single week. He already had the rest of the deck built, and he’s just adding Grandmaster to his list to update it. In addition to the weekly Standard FNM, he plans on attending two PPTQs during this month, both of which are also Standard. Ryan goes onto MTGPrice.com and notices that he can buy [card]Soulfire Grand Master[/card] for $25 per copy, making the playset cost $100. However, Ryan is also aware that almost every card in the new set is driven by large amounts of hype with little supply, so he expects that SGM will drop down to around $15 one month after the release of Fate Reforged. While SGM is hyped, Ryan believes that it is still a very powerful card and that $15 is the cheapest it will be during its Standard lifetime.

The cost of the playset one month from now is $60, meaning he theoretically loses $40 if he buys in today and plays with the cards during his Standard events. We said that Ryan is planning on playing a total of at least six events during this first month. We could throw in the possibility of Ryan playtesting the deck with his friends, but that’s what proxies are for, so we’ll only count real sanctioned events.

I think you can see where I’m going from here: the calculations are pretty simple. We divide the $40 cost of “renting” the playset by the number of events Ryan will be playing. Assuming our numbers hold true throughout the month, Ryan pays $6.66 to rent a playset of Grand Masters for each event.

Is that worth the cost? I have no idea, as I’m not Ryan. Maybe Ryan is a prodigy with the next tier-one Standard list in his pocket, and is going to take home the trophy every time, winning back every penny and more. Maybe Ryan’s a scrub, and his deck is terrible. If he asked me whether or not he should buy the cards right now, I’ll just tell him that I have no idea, it’s up to him. I can tell that you’re thinking: “Wait, we just did all that work to realize that there was no concrete answer?” Yeah, pretty much. While there’s not a black and white answer, having a price tag on how much it costs to rent the cards for the specified duration should be able to help some Standard grinders make the decision for themselves on whether or not it’s worth it to grab cards that they think will decrease in value over time.

Let’s look at the second theoretical question. Jason opens up two copies of [card]Ugin, the Spirit Dragon[/card] in his prerelease pool. Jason happens to have [card]Glissa, the Traitor[/card] and a [card]Karn, Silver Golem[/card] EDH decks that these Ugins would fit in perfectly. Good for Jason. However, Ugin’s sitting at a theoretical prerelease hype price of $40. Jason is fairly confident that the planeswalker tax on Ugin is the cause of the high price tag, and he expects Ugin to slowly go down to $20 as one month’s worth of the set is opened. The thing is, he’s not sure if he wants to go through the trouble of selling and reacquiring the card later on.

In this example, Jason isn’t a Standard player, so he has no plans to win prize packs with these Ugins. They’re going to stay in his deckbox until his playgroup’s bimonthly EDH night, where they crack a few warm Bud Lite Limes [Ed. note: Jason isn’t going to be happy that you implied he would drink Bud Light Lime, DJ] and stay up until the wee hours of the morning. If we expect Ugin to drop $20, then he’s losing out on $40 total by not selling his copies as soon as possible. If Jason only plans on playing them a couple of times before their price is cut in half due to increased supply, we don’t need to do math to see that there’s a very high likelihood that Jason would be better off dumping them until a later date. After all, EDH is a 99-card format, and he’s only replacing one percent of the deck, instead of a playset of cards in a 60-card deck.

This concept currently applies to the Zendikar fetchlands, as well. I’ve been getting a lot of questions along the lines of, “Should I trade for/buy/hold them now? I’m going to play with them a bit, but I don’t want to lose money when they’re reprinted.” A card obviously loses value when it’s reprinted, but the amount can vary widely. If we want to use the Onslaught and Khans of Tarkir fetchlands as an (albeit rough) guideline, we can see that the original fetchlands plummeted to 50 percent their previous values, and sometimes even less, thanks to the high print run of Khans of Tarkir.

One difference between the two sets of fetches is that the older Onslaught versions will retain some degree of value simply by being old-bordered, but the Zendikar versions won’t have that luxury when their attractive, reprinted copies come crashing into the market. If we tie together the theory we just went over, you can decide for yourself where you think the Modern Masters 2015 fetchlands (I’m pretty confident that this is where we’ll see them) will land compared to the Zendikar ones. Personally, I think all of the reprinted versions will be between $10 and $15, and the ZEN ones will retain a small premium of $5 or so on their new counterparts.

To further examine this, let’s look at one of the trades I posted early on in the article: 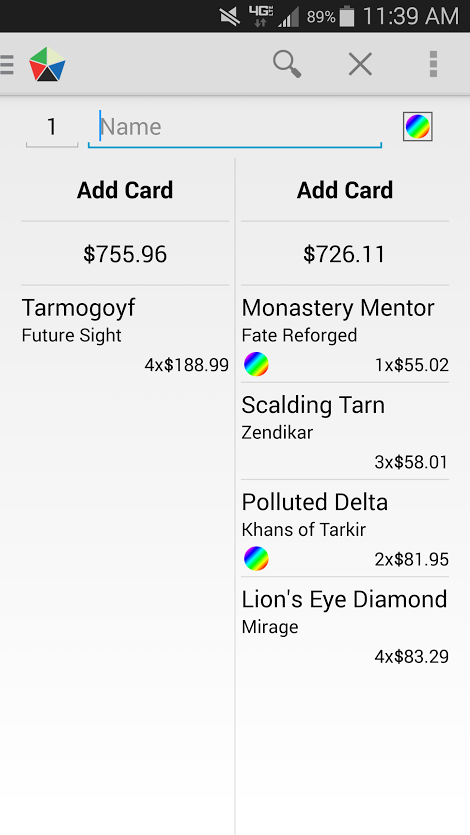 From a pure numbers standpoint, it looks like the individual receiving the Goyfs is “winning” the trade, to use an ugly word. He’s getting about $30 extra in trade value, and he’s turning a foil Standard card into copies of the most expensive Modern-legal card in the format. In addition, those [card]Scalding Tarn[/card]s are probably going to be reprinted soon in MM15.

However, let’s look at a few possibilities that make this trade worth it for the [card]Lion’s Eye Diamond[/card] receiver. Maybe his LGS is slowing down on Modern events as his playgroup starts to shift more towards Legacy. From the appearance of the trade, he looks like he’s trying to build some type of Legacy combo deck (hopefully one that doesn’t include [card]Monastery Mentor[/card]…). If the guy giving up Goyfs logically believes that he needs the LEDS and Tarns to play with, and if he’s going to receive a lot of utility from playing the deck, then I think it’s perfectly acceptable for him to “lose” money on this trade, especially if nobody else in his playgroup had the Lion’s Eyes that he needed.

While the above “renting” examples with Ryan and Jason were a bit extreme and on the far ends of the spectrum, I hope that there’s something to be taken out of them for analyzing your own personal situation, and making the decision of whether or not to “rent” cards during the course of their descent in price.

The situation doesn’t always boil down to, “Yes, I should sell this card/wait on buying this card, because it will go down.” My answer might be vastly different than yours, and we can both be correct.

@Rose0fthorns     -     Email     -     Articles Douglas Johnson is a 20-year-old MTG player who goes to college courtesy of a scholarship from Gamers Helping Gamers. He is currently found writing a weekly finance column at MTGprice.com, and you can always feel free to contact him on Twitter, Facebook, or Reddit.
Previous Episode:
Pitt Imps Podcast #104 Back to Basics
Next Episode:
Friday Night Brainstorm: Dissecting FKK Drafting