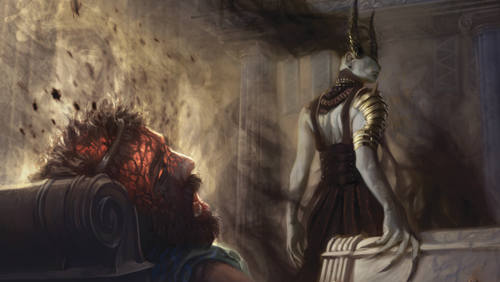 So I just won a PPTQ… Yeah it feels good. It feels better than good actually, it feels fucking great to be one tournament away from a dream I have had for a very long time. Apparently the best way to prepare for a tournament is to have a bunch of friends over have a drink or two go for a late night swim make some smores and team draft MMA2. Ya know, just your average tournament testing. I got to reanimate [card]Ulamog’s Crusher[/card] with [card]Artisan of Kozilek[/card] which was so gasssss!!!

Anyway back to the point of serious competitive Magic and not crushing mildly inebriated team drafts. I have been playing the same Nightmare Jund list for the past two months and the deck is pure gas.

Last weekend I 0-4 dropped from a PPTQ. I wasn’t having fun. I wanted to win more than anything else and I was killing myself just trying to get the win. That whole plan was not working out for me. It turns out though that casual kitchen table drafting with great friends is a great way to correct my mindset and start climbing out of the Levine trench that I have fallen pretty deeply into. 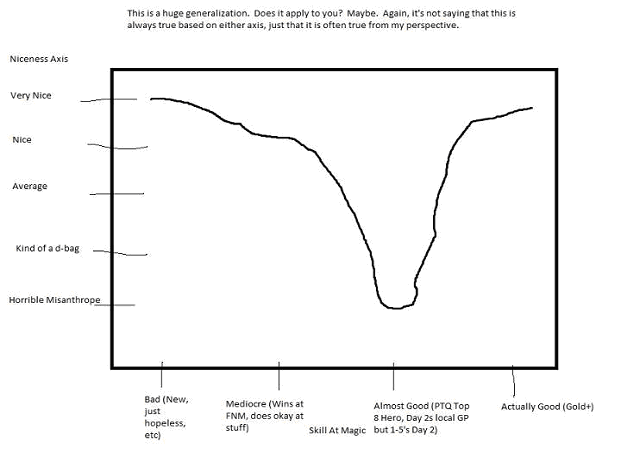 Although I still feel like I’m in the trench I feel as though I am no longer as far down as I used to be and I at least like to think I’m somewhere around the Average area on the graph although with my constant chatter and horribly sarcastic jokes I can totally understand people lumping me in with Kind of a D-Bag. Such is life and anyway now I get to talk about Magic more and all of my matches woo!

Actually nothing much to see here. I had tons of removal game 1 and my opponent didn’t. Game 2 I mulliganed to four and game three my opponent got stuck on two lands in a five card hand. It was a pretty easy 2-1 although the matchup can get really grindy. I feel as though the matchup is in my favor just on the basis that as a Jund variant we have a solid 50% matchup game 1 and we can sideboard into five different Wrath effects which can just slaughter the match. 1-0

No offense to my opponent intended but this deck without the addition of black and the powerful delve creatures feels like a joke. [card]Ashiok, Nightmare Weaver[/card] is more insane vs Grixis Delver but they also get there in this matchup when it turns out that the best creature Jund can have in play while drawing two cards a turn is [card]Young Pyromancer[/card] and it is even better when you can steal them. Swag points from this match came when I bolted then Snapped back the bolt off of Ashiok to finish off my opponent. 2-0

So this was my first matchup of the day where the namesake card of the deck really was shining. Ashiok is in the deck to dominate the BGx mirrors and also slaughter some creatures matchups and with the addition of [card]Eternal Witness[/card] to all of the [card]Collected Company[/card] decks you just start rolling in value. I was playing against a player who is known for some very unsavory things and has been banned once or twice by the DCI. I let it get to me a little and I punted game one when I had him dead on board while playing Russian Roulette with a [card]Dark Confidant[/card] desperately trying not to die. Games 2 and 3 I was able to use some of our power board wipes while riding Ashiok’s value train to winnersville. 3-0

Round 4: Death and Taxes

Somehow a mono-white Death and Taxes deck was 3-0 and I was more than happy to be their opponent. I killed a lot of creatures game 1 and had a great meal at [card]Olivia Voldaren[/card]’s ultra gassy taco hut. I lost game 2 to [card]Archangel of Tithes[/card] which is so gas but [card]Damnation[/card] and Ashiok’s express train to value town won game 3.

I intentionally drew with a local Jund player I know because it was in my best interest to lock up top 8 and lock a good matchup into it as well.

I intentionally drew with my eventual finals opponent because like we drove together and could lock up top 4 seeds so it was just kinda better all the way around. Like no need to shit on a friend when you can both come out ahead.

I played my friend Charles this round who you may remember from when I won NJ states a couple months ago. I died super hard game 1. Like just so dead, like I was the dead horse that I am beating right now about how dead I was. Game 2 we both weren’t able to count. I was at 10 life and he sacrificed all of his artifacts to have a 10/10 [card]Arcbound Ravager[/card] and attacked it was then seen that I had a [card]Night of Souls Betrayal[/card] in play and I went to one life and won the game. Game 3 I got a sick 4 for 1 off of Anger of the Gods followed by a Kolaghan’s Command 2 for 1. It was sick. I won. It was great!

I was dreading this matchup so much because one for one removal is just dead vs token generators that are routinely 3 or 4 for 1s. I died super hard game 1 because like I legit can’t beat spirit tokens with every single deck I ever play in Modern. Game 2 I found out that [card]Maelstrom Pulse[/card] is actually BAE and [card]Snapcaster Mage[/card] targeting Maelstrom Pulse is like super ultra BAE. Long story short I drew A LOT of board wipes and was able to win the match in game 3.

Remember that guy from round 6? Yeah his name is Alvaro and he wanted prizes and I wanted an invite so this one was super easy. I got my congratulatory handshake and hug. It was great, I won, and now my plans for Sunday and the rest of my summer weekends are completely ruined #Tilt.

So back to the deck now which is totally GAS. Breeding Pool is mostly interchangeable with Steam Vents because both seem to be correct about 50% of the time and right now I am enjoying having the extra green source in the deck. One of my big things that I did today was dropping my second copy of Night of Souls Betrayal so I could play Izzet Staticaster and that card is great.

Anyway I’m incredibly hungry and tired and need to go eat something so I’m gonna wrap this up. This deck is great if you want to grind out all of the midrange creature matchups while sacrificing some points versus combo. That is basically the gist of it and Magic is an amazing game. P.S. Alvaro can rap about Spiderman like its nobodies business like I think hearing that was the greatest part of the day and I Q’ed for the RPTQ today.

Oh I totally have this deck on MTGO now so expect some videos or even streaming sometime soon! I’ll update when I get everything together.

I am a full time student at Hampshire College and a Modern format specialist. I have been playing Big Zoo since the unbanning of Wild Nacatl. I hope you enjoy my writing and through it I can help us all improve and people and players in the Magic community.
Previous Episode:
Money Draught #36 – The One About The Proxy Guy, Markets, and Mass Hysteria
Next Episode:
Looking Back and Looking Forward: Analyzing GP Lille