One of the oddballs in recent times has been how chase M14 Mythics have more or less maintained their prices despite seeing close to zero competitive play. There have been a few theories in response to this new trend, one being that casuals have started taking up more Magic. Ryan Bushard wrote an article about the phenomenon where casuals in addition to competitive players have begun to shape the prices of cards here:

But I don’t think that’s the whole story. One of the newer concepts in economics is that to a small degree, supply affects demand. The most relevant example here is the case of San Diego Comic Con Black on Black Planeswalkers. Without even any original demand for the product, because players know that the card is extremely limited in supply, the demand goes up. Players who aren’t normally collectors will want to get in for cheap. This effect is closely related to the concept of anchoring, which is the value that people tie to cards that may imperceptibly affect the value even though the prices themselves may not be in line with reality.

The net effect is simple. Because supply is down, which in turn increases demand (albeit by a small amount), price shoots way up.

Going forward, I think we’ll see other sets with relatively small prints where the key cards, because of a more limited supply, have a real chance to go up much higher than expected just because of the supply.

To apply the example, I would argue that one of the biggest spec target for current times to be cards from FTV 20 and other limited releases. The supply limit is real deal here, partially because people who end up with boxes don’t want to open it up. Why open the box when the box can easily double in price five years from now? Even if the cards go up in value, because a sealed box is worth more than an opened box, players have an incentive to keep it sealed.

Looking closely at the 20 FTV cards, the FTV 20 card that the least number of vendor listings is [card]Gilded Lotus[/card], lower than [card]Jace, the Mindsculptor[/card]. On TCGPlayer, the card is already at a supply that is about half of other FTV 20 cards at 35 vendor listings selling copies ([card]Jace, the Mindsculptor[/card] at 58, [card]Hymn to Tourach[/card] at 66, [card]Swords to Plowshares[/card] at 60, and [card]Dark Ritual[/card] at 72). The example obviously doesn’t hold perfectly because for some of the cards like [card]Chainer’s Edict[/card], there are only 48 vendor listings selling copies, but each vendor listing has more copies.

I would argue that [card]Gilded Lotus[/card] is the card in FTV 20 with the most growth potential for the following reasons:

1. EDH is the real deal in driving prices, and foil just makes it sweeter. Gilded Lotus is and will be one of the top played EDH cards, it is currently the 14th most played card in EDH based on metamox.com

2. The new art is by far the best. I forgot who said it, but the picture is actually a “gilded lotus” (for those who are English illiterate like myself, gilded means covered in gold paint). I also doubt that the art will see a reprint anytime soon because other FTV cards with new art have not.

3. I distinctly remember a tweet that Jason tweeted about his wife wanting a foil Gilded Lotus #CreatedAMonster I have no idea why I remember this or why this is even listed as a reason. :)

Strip Mine from FTV Exiled (released in August 28th, 2009) is the card that most resembles Gilded Lotus. It’s a new art that is sweet on a card that is primarily played in EDH at 681 copies based on metamox, and I estimate that the supply of non-FTV version is about the same based on the number of eBay listings (221 total for Gilded Lotus and 209 otal for Strip Mine). However, you can see that the FTV Strip Mine has doubled up year over year and shows no signs of stopping from doing so. 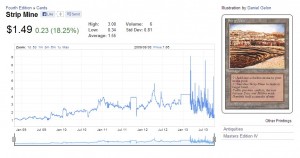 On the other hand, the prices of the 4th Strip Mine, at 131 vendor listings currently, has remained largely stagnant over the three years since the release of FTV Realms. The difference in art, the new and only foil, and the low supply are the contributing factors.

I’ve acquired 14 copies of [card]Gilded Lotus[/card] at $4.50 each after shipping and have traded for 2 more copies. I’ll be actively trying to trade for more as the prices have already bottomed. Just as a side note, if people think that [card]Chromatic Lantern[/card] at 693 times used in EDH decks, [card]Thespian’s Stage[/card] at 330 times, and [card]Vesuva[/card] at 393 times are good bets, then [card]Gilded Lotus[/card] at 697 times used is probably a safe bet too (data based on metamox.com) especially considering the shortage in supply AND the new art.

Because of the limit in supply, another card that great potential, as obvious as it may be, is [card]Jace, the Mind Sculptor[/card]. Since Starcity has chosen to double down on having Legacy Sunday on all its weekend tournaments in 2014, Legacy will likely continue gaining popularity in the upcoming years. Jace is the 12th most played spell in Legacy and is also widely played in any EDH deck containing blue, making it a multi-format all-star.

Is this the bottom of the card? I don’t know. In the stock market, a general advice is to not try to catch a falling knife. You don’t want to be that guy buying in too early because it’s easier to buy into an upswing. But it’s definitely worth keeping a watch on the value of a sealed FTV 20 and also the price of [card]Jace, the Mind Sculptor[/card].

For reference, here a couple of the past FTV cards that are widely played in multiple formats:

FTV Realms was released in August 31st 2012, a year before FTV 20. Since then, [card]Grove of the Burnwillows[/card] has more than doubled in price. There are currently two listings on the card, the FS set at 48 vendor listings and the FTV Realms at 19 vendor listings. [card]Grove of the Burnwillows[/card] is the 30th most played land in Modern and also 20th most played land in Legacy [card]Punishing Fire[/card] combo.

One of the most ridiculously played cards, SDT is the 10th most played spell in Legacy and the 7th most played card in EDH at 881 copies. FTV Exiled is from a set in 2009, so prices have gone up since then. You can bet that even though its original printing was an uncommon, that the FTV card price will continue to shoot up even though there are 152 vendor listings for the CHK one AND the artwork is the same between the new and the old.

I hope that I’ve made my case that supply can be a real driver in card prices as long as there is a demand. Cards in FTV are in particular worth looking at because the supply is already known to be artificially low, and the demand will be based on the eternal formats that the cards see play in. The same can also be said for Judge Promos, as well as Full Art Promos and other special items. Sometimes, it doesn’t matter how many printings of the other versions of the card there are. Promo textless [card]Lightning Bolt[/card], the most common card in Modern by far and the 9th most common spell in Legacy, will always have a market even if the common [card]Lightning Bolts[/card] are at $1 each.

EDIT: As RichJMoney has noted, Grove of the Burnwillows has a different art and frame between the Future Sight and the FTV: Exiled prints.

@fyawm     -     Email     -     Articles Tim Enmou Gao is a writer for Brainstorm Brewery and resides in Los Angeles. A Modern-phile at heart, he is currently piloting a RUG Delver. You can reach Tim on Twitter or /u/fyawm on Reddit.
Previous Episode:
Sander Van Der Zee – Eternally Innistrad
Next Episode:
Jason Alt – MTGO Zero