Theros has been on the market for about a month now and card prices are slowly settling in after the results of Pro Tour Theros. While everyone busies themselves with the acquisition and distribution of Theros singles with an eye on what the current Standard format has to offer, I prefer to take a financial look back at what has only recently left us by enlightening you how our Innistrad-block staples are fairing in the non-rotating format of Modern and how that still affect their prices in both the US and the EU.

Innistrad block was a flavourful trio set that offered standard a lot of playable and very powerful cards that have defined the format for the past two years. Many of these cards even overshadowed the Return to Ravnica block cards that are only just seeing the constructed play! As you are reading this there are probably a couple of cards that instantly come to mind. Allow me make it easy for you by compiling all of the most impactful rare and mythic cards from Innistrad block in a list below.

Most of these cards have already been dropping in price in the time leading up to the release of Theros and many cards will continue to do so for probably another two or three months before they reach their bottom value before they go up again. This is usually the best time to pick up cards- when they’re at their low value and you can sit on them as a small and safe investment. But how do you determine which cards you should snap up in trades? It is simple! We will just look at the facts.

One of the first things we have to do is decide which cards will still see play after they have done their time in Standard. (Hint: They have all done their time now) The most secure way of determining that is by looking at their playability in eternal formats. Keep in mind that I am eschewing casual formats for the sake of this article for now, but do not hesitate to use your gut feeling and a bit of nosing around to see if other cards like [card]Parallel Lives[/card] have made their way to the EDH and kitchen table in the past two years.

The tools I use to help me get a view of the amount of play these cards see up to this day are MTGGoldfish and MTGtop8. Both of these websites give you a nice list of how many decks play a certain card, how many copies that deck plays of the card and what percentage of the metagame that deck makes up. Let us take a look at how explosive the card [card]Sulfur Falls[/card] from Innistrad performs in the eternal metagame! 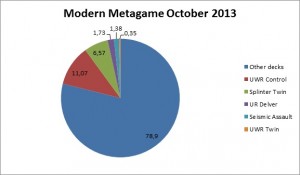 But now we need to relate this to the finance side of things. We have determined that there will still be a demand for the card using both the numbers and a little bit of gut feeling. Let us look at how the price on [card]Sulfur Falls[/card] has been doing as our second statistic benchmark and evaluate the price versus the amount of play it sees. This time I will make use of the open-market information sources of TCGplayer.com and Magiccardmarket.eu. 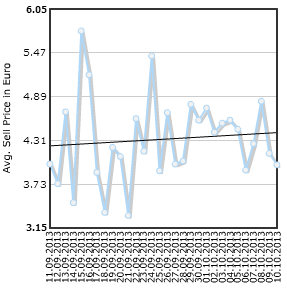 We have seen a bit of a drop in the months leading up to the rotation, but as of now the card is slowly creeping up again, reaching the 4,50 Euro (6$) range. I have applied a bit of gut feeling and common sense to these numbers and came up with the following conclusion. If it is already going up in price now now even after the rotation, I do not see this card going down any more before it gets a solid reprint. I can see this card reaching filter land price status, but it will take a lot of time before the demand for this card reaches a point where that will be the case. Financial opportunity? Certainly there, certainly low!

Next we shall take a look at one more card before I shall give a short fact-sheet on each card from Innistrad block I listed before. I picked [card]Geist of Saint Traft[/card], a card that has haunted Standard in Delver and Hexproof decklists for two entire years! 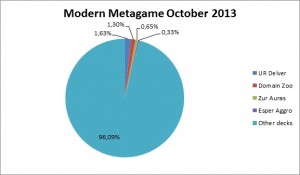 The quantifiable metagame results from the last month do not prove positive for our shortly deceased cleric. Only 3,91 percent of the decks with a good result ran one or more copies of [card]Geist of Saint Traft[/card]. Now, how does this influence our evaluation?

This is when we take a step back again and look at the other set of data we have, the price versus the potential, because we are aware that the card is not being played very much right now. If we take a look at both Magiccardmarket and TCGplayer we can see that the prices are at 15 euro and 17 dollars USD respectively. In the height of its play the card has seen a pricepoint between the thirty and fourty dollars USD with a large portion of the metagame consisting of decks that included [card]Geist of Saint Traft[/card]. How likely is it that the percentage of decks within the metagame playing [card]Geist of Saint Traft[/card] increases from 3,91% up to 10% or more? That is where gut feeling and common sense come into it again. 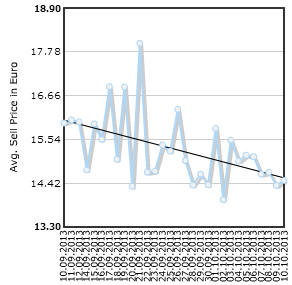 That wraps up my article on the Innistrad cards using these two examples. In the link below you can find the excel-sheet containing all of the cards modern metagame percentage and current pricepoints so you can apply your own gut feeling and common sense to them to make your own conclusions. If you find any that you feel are great financial opportunity or you think are dangerous traps for people to walk into? Feel free to share them in the comments below. If you want to reach me you can find me on twitter @TheMeddlingMage or contact me at [email protected]

@TheMeddlingMage     -     Email     -     Articles Sander van der Zee is an industrial engineering student who specializes in lean-thinking. He stepped back into Magic in 2009 after a three-year break. Picking back up the pieces, he developed an interest in the financial, technical, and community sides of the game.
Previous Episode:
Brainstorm Brewery #72 – Inside the Matty Studio
Next Episode:
Enmou Gao – Limited Supply