With each new set it seems like retailers are getting better at pre-pricing cards to fit card hype and demand. I look past the chase rares/mythics and find the diamonds in the rough. Below are five cards I think are worth investing in. 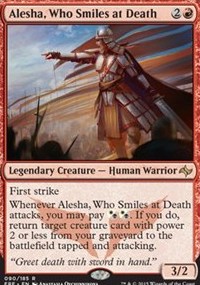 The list of “bring-backable” creatures seems be longer than a Transformer movie.  Bringing back a [card]Seeker of the Way[/card] or a [card]Frenzied Goblin[/card] doesn’t seem like bad value.  Aggressive decks want to play her to recur the fallen creatures from previous combat steps. She’s great in the aggressive mirror where her first-striking three-power body stops almost any aggressive creature in its tracks. For only 2R, she can be splashed into any self-mill brew to try out her reanimation abilities (I’m looking at you [card]Hornet Queen[/card]!).

What holds her back is the lack of impact on the board when she’s cast. You have to wait a turn, spend non-red mana, and declare her attacking to gain card advantage. Does that make her a sideboard option for aggro versus aggro mirrors? I’m not sure, but the first strike really wins me over. She’s legendary, so she may not always be a four-of, but could still make for a fun EDH deck. Timmys love her, Spikes see potential, and Johnnys want her to achieve a battlefield of brokenness .  I don’t see her going lower than $2, but I can’t see her exceeding $5. 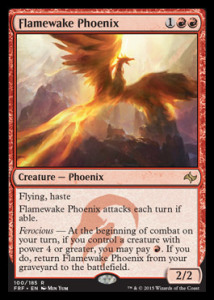 I recently compared [card]Flamewake Phoenix[/card] to [card]Chandra’s Phoenix[/card] (here), but since they won’t be in the same Standard format (so far), we’ll just have to focus in on Flamewake for the time-being.  R/G Monsters has been in and out of top eights for almost a year now, taking many different forms and sometimes splashing to become Temur or Naya.

What seems to stay consistent is its ability to activate ferocious.  In combination with [card]Ashcloud Phoenix[/card], I think these hot-headed squawkers wouldn’t mind crossing feather for some aerial assaults in Standard.   I hope they don’t forget to wave down at an allied [card]Polukranos, World Eater[/card] as they fly by. Add [card]Sarkhan, the Dragonspeaker[/card] or [card]Stormbreath Dragon[/card] for a crimson air show.  I see price potential at $5 or $6 in future Standard, since you’ll always play four and it fits in [card]Titan’s Strength[/card] aggro decks and even more synergy with aggressive midrange “monster” strategies. 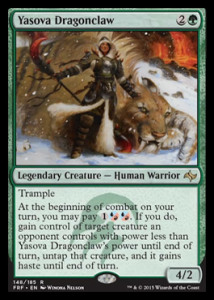 This was one of the first cards spoiled from Fate Reforged.  I wasn’t much of a fan when I saw the two toughness, but I might be looking at the wrong number. As He-Man would say, “I HAVE THE POWER!”… to activate ferocious.  I remember saying on the show, “If ferocious is relevant, Yasova is relevant.” She works extremely well with [cardFlamewake Phoenix[/card].

Rinse, repeat, and cast other spells when needed.

Of course your opponent will likely kill the Yasova as soon as possible, but this works with any four-powered creature and is still better than casting a [card]Boon Satyr[/card]. It’s as close to extort as R/G will ever get. Instead of draining for one, you’ll just attack with a two-powered creature. She is easy to kill because she takes over the game if you don’t kill her. That worth more than a $1.50, right?! I’ll pick these up all day long and might even score her as a throw-in. 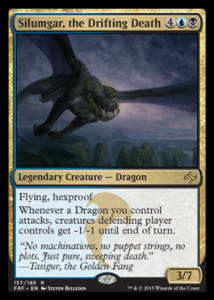 If you took the best qualities of [card]Wall of Denial[/card] and [card]Doomwake Giant[/card], you’d end up with this monstrosity. This 3/7 is always defensive until you don’t need it to be. Its only weakness is needing to attack to get the -1/-1 ability, although I doubt this weakness would encourage the addition of other Dragons in your deck.

U/B Control is its obvious home, but I could see a Sultai Midrange using it to win board stales without having to worry about hornet tokens.  Not sure if it is worth playing four copies, but $2 for a format staple should already be on your list of pick-ups. It’s another rare that can only go up from here.  By the way, $22 foils should convince you card slingers are already playing him.

The legendary cycle of dragons seemed to be common at the prereleases I attended, so I’m sure this will be easy to find for the next couple weeks. 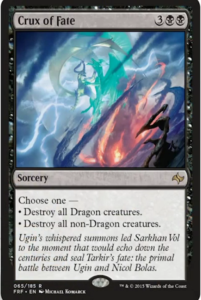 When I picked this card for the article, it was sitting at $3, but is already up to $5 after prerelease weekend. So it’s turned into a long-term pick-up instead of a “buy all you can while you can” pick-up.

As far as playability, the obvious deck is U/B Control, since we’re all aware of its existence and strategies. But what about the B/G decks that don’t want to splash for white?  I’m a fan of the one-horned villain myself ([card]Siege Rhino[/card]), but you know how Wizards of the Coast is. They want the Standard environment to constantly change (I’m looking at you Siege Rhino & [card]Courser of Kruphix[/card]). The fact is, B/G Midrange wouldn’t mind sweeping for value to set up a delve or [card]Whip of Erebos[/card] activation.

I expect this card to settle at $5, but it could see some spikes throughout its time in Standard.  You can’t go wrong with picking up a few extra to take advantage of a potential increase in demand. Though, since this is from a small set and we only require one Fate Reforged pack for the next two draft environments, the supply could be lower than expected.

What uncommons could break $1? I’d put my faith in [card]Valorous Stance[/card].  It’s defensive, offensive. currently in a highly played color, easy to cast (1W instead of WW), and plays at instant speed.  If you’re not convinced, pick up a couple sets of [card]Reality Shift[/card]s and see if they’ll find a deck.

As always, thanks for reading

@TNSGingerAle     -     Email     -     Articles Houston is the host and creator of Tap N Sac Podcast. He enjoys any format with a healthy community. He usually taps Mountains to have fun and taps Islands to win.
Previous Episode:
Episode 72 – A Self-Help Guide to Magic
Next Episode:
Weekend Magic: 1/30-2/1