Sweeper effects have been a long-lasting staple in Magic.  These effects make aggro players cry and control players gleam.  They can make or break a game and trigger the same “ooooh’s” and “ahhhhh’s” Wizards of the Coast (WotC) tried to accomplish with the Miracle mechanic from Avacyn Restored. These game-changers will continue to be reshaped and reprinted as long as the game needs them. So which are currently worth investing in? 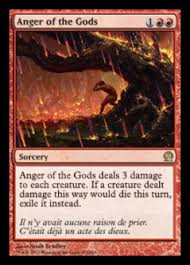 It’s still in Standard, seeing fringe sideboard play according to the toughness of the top aggro deck. This card really makes the list due to its playability in Modern. With [card]Pyroclasm[/card] sweeping the best two-toughness creatures, [card]Anger of the Gods[/card] fills that same role with eliminating three-toughness creatures. Despite the unbanning of [card]Wild Nacatl[/card], Zoo hasn’t been landing in many top eights, but the existence of the cat’s power cannot be ignored.  The Modern meta has more than enough viable decks to continuously see a rotating meta and I think Anger will see back and forth play when its services are needed.  Though it’s still in print and a part of the newest block, $2 is a steal for a three-toughness sweeper that exiles and wears the rare Theros symbol well. 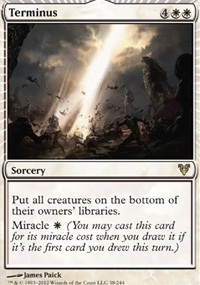 Yes, this sweeper makes [card]Sensei’s Divining Top[/card] that much more powerful, but Legacy is not what creates its demand. Casual crowds still love the miracle mechanic.  EDH is still receiving support from WotC, yet Terminus has not been reprinted in a precon yet.  If you play EDH, you know the best way to dispose of a commander is pushing it to the bottom of its owner’s library. [card]Hinder[/card] and [card]Spell Crumple[/card] are blue’s auto-include Commander counters, while white has [card]Condemn[/card] and [card]Terminus[/card]. It takes care of indestructible, shroud, hexproof, regeneration, persist, and undying creatures. It’s a rare, no longer in print, and is demanded by casual players. The price could easily climb while everyone else is speculating in the other direction. Hell, if you have the opportunity, pick up the $10 foils.  Any Commander foil staple is never a bad pick up. 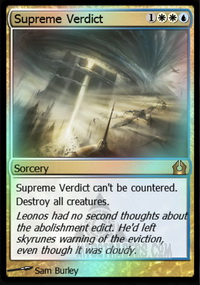 Oh look! An uncounterable sweeper seeing play in all Constructed formats (Standard, Modern, Legacy, Commander). It’s no longer in print and only has room to grow. The closest comparison would be the power of split second in Legacy. Though split second is superior to uncounterable, I can’t imagine a future split second sweeper costing less than five mana.   U/W/R in Modern has been a consistent player since the start of the format. Verdict’s only competition is [card]Hallowed Burial[/card] for particularly creature/graveyard heavy formats. 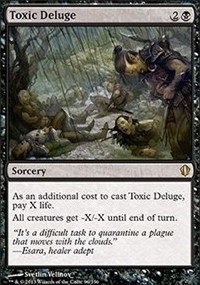 I’m going to blow your mind! So there is this card called [card]Death’s Shadow[/card]… I’m kidding, I’m kidding. As we all know, [card]Toxic Deluge[/card] is catching the attention of Legacy players who want to hedge against [card]True-Name Nemesis[/card] while also possessing the power to kill a large [card]Tarmogoyf[/card] when times become desperate. Why I like this card so much can be bottled into one word: versatility. [card]Black Sun’s Zenith[/card] wants more mana, [card]Disfigure[/card] and [card]Grasp of Darkness[/card] have to target and create zero card advantage. Legacy has a large focus on using fewer cards and other resources to eliminate more than one threat.  I mean, we want to do that in every format, but Legacy punishes/rewards players to an extra degree and can many times make or break a given match. This format has no room for narrow cards (except toward Dredge, because no one has ever enjoyed watching a Solitaire play-through). Again: limited print run, one per deck, uses life as a resource, and can sweep as high or low as you desire (life total depending). 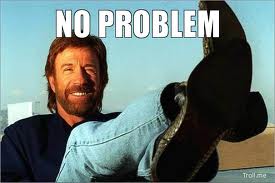 “What is wrong with you, Ginger Ale!? You’re going to encourage me to invest in an $18 card only seeing minor play in Modern Tron decks and that glasses-pusher kid’s all-artifact Commander deck? Are you insane!?”

Just hear me out, alright? The obvious arguments for this card are Commander, casual demand, and mythic. Though I do think this plays a factor, I want to go for next level. I am not a fan of speculating on cards or ideas without facts, but I’m about to break my golden rule.

– Revisiting the eldrazi plane seem far enough in the distance to not worry about an upcoming price tank. If anything, revisiting could increase the demand for the “original” eldrazi cards.

– A one-sided sweeper always has potential. 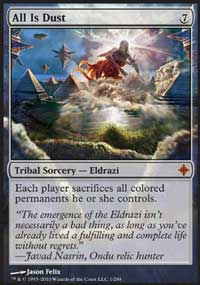 – With a premium From the Vault coming in August named Annihilation, it’s hard not to assume a mythic from a expansion with the mechanic “Annihilator” will be the shining star of our next cluster of over-foiled pimpage.

-With so much love for the Eldrazi expansion, WotC is bound to cash in on the set at every possible opportunity. It’s just smart business.

Take it all with a grain of salt, but for me, I like picking this powerful sweeper up before its price escalates out of reach.

Sweepers are often great pickups and continue to play a large role in this game. Don’t miss out on the chance to get in, because the best way to miss out on a good pickup is by believing your speculated reprint is truth. The saying “high risk, high reward” comes to mind, but the reality tends to be a thousand-count card box full of unmovable speculations. Though a lot of factors come into play to determine how playable a card is, trying to stay one or two steps ahead of the metagame will benefit you more often than next-leveling the next level of the next-leveled level.

As always, thanks for reading,

@TNSGingerAle     -     Email     -     Articles Houston is the host and creator of Tap N Sac Podcast. He enjoys any format with a healthy community. He usually taps Mountains to have fun and taps Islands to win.
Previous Episode:
Weekend Review April 4-6
Next Episode:
Casually Infinite – Bad Pool