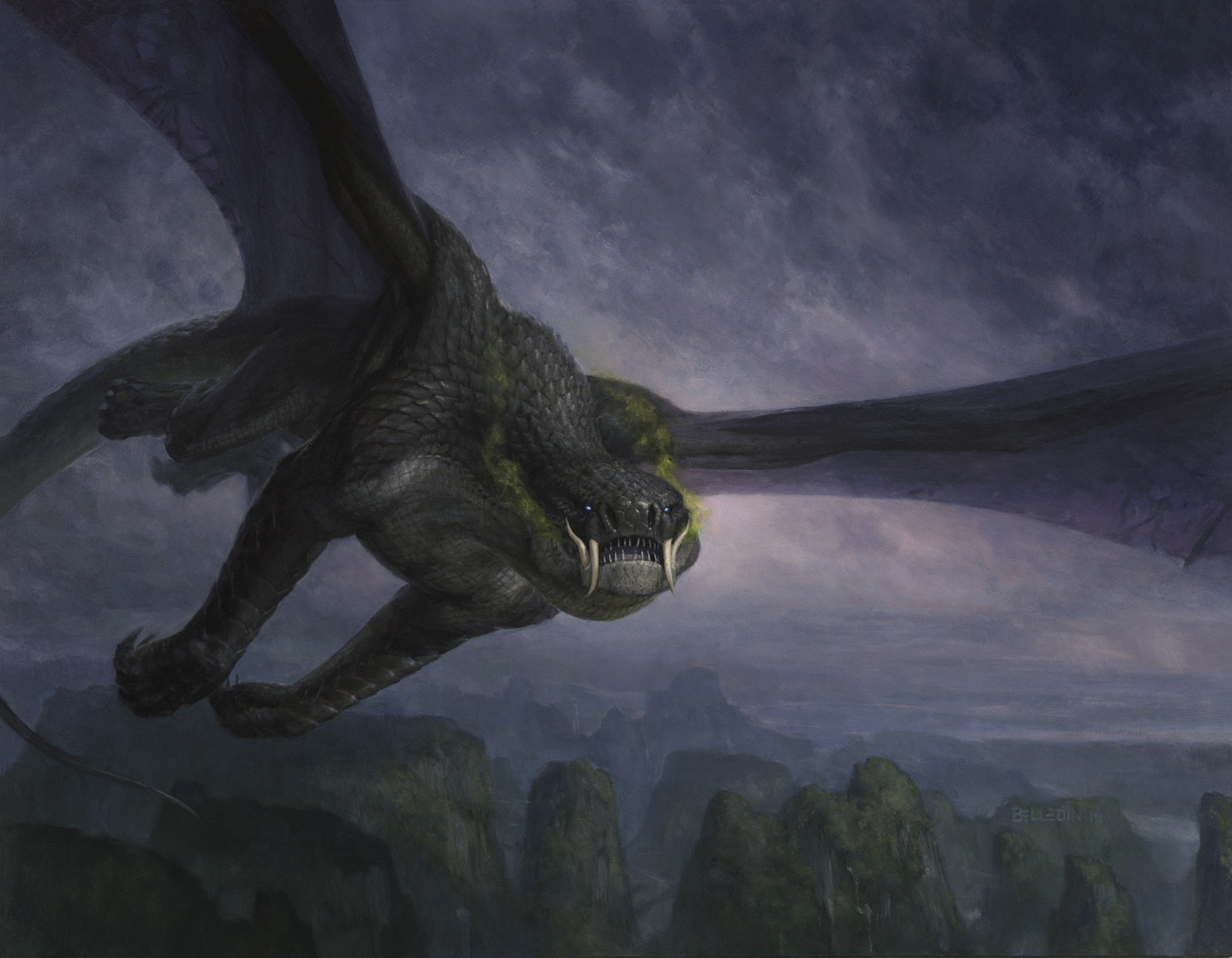 FKK (Fate Reforged – Khans of Tarkir – Khans of Tarkir) drafting has been quite a joy for me the past couple of weeks. I’ve drafted the format quite a bit and learned a lot about it along the way. It isn’t an easy format, though, so I’ve dissected it down to share my understanding of it.

Going into pack one, you should have one thing on your mind: be in two enemy colors. For those of you who don’t know, enemy colors are any color symbols that are not adjacent on the back of a magic card,  meaning the enemy pairs are white/black, blue/red, black/green, red/white, and green/blue. So, why should you be in enemy colors?

The common dual-colored cards in Fate Reforged are all in enemy colors, and all have decently powerful effects (some more than others). The cards I’m referring to are [card]Grim Contest[/card], [card]Harsh Sustenance[/card], [card]War Flare[/card], [card]Ethereal Ambush[/card], and [card]Cunning Strike[/card].They’re powerful enough to be early picks in a draft, and can give you direction to what you want your final deck to look like. If I had to compare, they’re a lot like the common cycle of picks from Dragon’s Maze ([card]Beetleform Mage[/card], [card]Tithe Drinker[/card], [card]Viashino Firstblade[/card], [card]Zhur-Taa Druid[/card], and [card]Pilfered Plans[/card]). As with both cycles, there is a card that doesn’t quite measure up with the rest, the two being [card]Pilfered Plans[/card] and [card]Cunning Strike[/card], which can both be late picks without giving any signals.

During pack one, your plan should revolve around setting up for your Khans of Tarkir packs. Odds are that you’re going to end up with a three-color deck. Khans of Tarkir provides quite a few powerful three-color cards that reward you for splashing. If you’re in enemy colors, there will be two clans you can choose from, which means you’re going to be open for signals to move in on either clan. For example, if you’re in black/green after your Fate Reforged pack, you’re open to move in on either Abzan or Sultai in your Khans packs, so if you open a bomb rare or get passed a late clan card, you now have an easy direction to go in for your splash color.

As with most rules, there are exceptions to this. Wizards also printed a cycle of rare dragons that are all in allied colors. These dragons are all incredibly powerful (with the exception of [card]Atarka, World Render[/card]). If you pull one, I would say to try to pick up cards in the colors of your dragon, since they get better if you can cast them with your two main colors. If one of the colors is being cut, simply move in to the enemy color pair that matches the one clan of your dragon (for example, move to white if you get [card]Kolaghan, the Storm’s Fury[/card]) and try and force your way into it, so you can play your dragon and pick up clan cards in Khans. (For more, see Case 1 under Pack 2 below).

The second exception to this rule is blue/white. Blue/white is a naturally aggressive combination and [card]Jeskai Runemark[/card], which is eternally underrated, goes right into the deck. Since your aggressive decks are going to want to be two colors (in order to cast their spells on time), being in blue/white and not being open to move in on a clan in your Khans pack is a perfectly fine move to make, from what I’ve seen. Blue/white has its own plan in the Khans packs, since it really doesn’t want to play a clan. This follows along with Case 3 under Pack 2 (below), since there is a chance you’ll splash, but you have a large incentive to remain two colors (aggressively casting your spells on time).

As I talked about in my discussion of the Fate Reforged pack, you should most likely be in two enemy colors going into your first Khans of Tarkir pack. A large portion of the time, this first Khans of Tarkir pack you open is what I call The Signal Pack, and this is where the paths begin to diverge in the decisions you make, based on what is in the pack you open and what you get passed. I’ll talk about this pack for a while, as this is actually the most important pack in the draft for most players, where everyone settles into a deck. If the draft is played correctly, pack three should have little to no competition over what you’re playing, since FKK drafting at its core encourages a healthy mix of players who force a deck and players that pick up signals.

When you open your pack, you will find one of three things:

If you are in black/green moving into pack two and open an [card]Abzan Ascendancy[/card] (or a similarly powerful card), you’re going to be in this position. Your role at the table has now been defined. The people who end up in this direction are going to have a great reason (a bomb rare) to pursue a clan.

Opening this third color direction means you know which splash lands you want ([card]Sandsteppe Citadel[/card], [card]Scoured Barrens[/card], and [card]Blossoming Sands[/card] in this example), so you will likely be able to pick them up before others know what splash they’re looking for (and are picking up cards like [card]Longshot Squad[/card] in the meantime). This means you will be able to play more of your splash color and can be liberal with your picks of cards like [card]Armament Corps[/card], which are normally harder to play.

Without opening a bomb rare (or powerful uncommon in a really bad pack), I think forcing a clan is generally a bad option. You don’t know what you’re going to see halfway through the pack. If you take an [card]Abzan Guide[/card] pick one, for instance, and see a [card]Sultai Charm[/card] and two [card]Abomination of Gudul[/card]s, you’re going to regret not remaining open for the signals. You need a powerful reason to move into a third color straight off the bat in pack two, but the people who do so should plan accordingly, and their presence is very important to people who want to get signals.

This is going to be the most common case, and the reason I call pack two The Signal Pack. Most people at the table (roughly four to seven of them) are going to be in this situation. The first thing you can do is recognize your role at the table. You’re going to remain open to signals that are being sent. Until then, you should take cards that are in your two primary colors over fixing that is geared towards one clan (for instance, if you’re red/white, take a [card]Hordeling Outburst[/card] over a [card]Mystic Monastery[/card] or an [card]Ainok Bond-Kin[/card] over a [card]Bloodfell Caves[/card]). One of the reasons you picked enemy colors in your Fate Reforged pack was to remain open to two clans, so taking fixing for one clan without having a reason to play that fixing isn’t where you want to be.

One of two things will then happen. Either the guy to your left decided to play four colors and is cutting any clan options you have, or you will see some clan cards come up. Odds are in the favor of the latter, but you’re fine in either case.

If the guy passing to you is in both of your clan options, he’ll be picking up a lot of multicolored cards and lands. This means you can just shift very easily into a two-color deck, since a lot of powerful one-color cards will be making it through him. In fact, this situation may be better since it will result in almost no competition in pack three, since most of your colors got cut in pack two.

But, in the more common case, you will see something like a [card]Bear’s Companion[/card] or a [card]Ponyback Brigade[/card] at some point in the pack. This will clue you in to your splash direction. It takes practice to tell just when to move in on a clan, so it won’t always be obvious. The general rule is if the power level of a card in your colors is about the same or a little worse than a card that would move you into a third color, take the one in your colors. Most of the time, around picks five to eight, you’re going to look find a card from the common morph cycle, the rest of the pack won’t have anything good for you, and that will inform your splash direction. 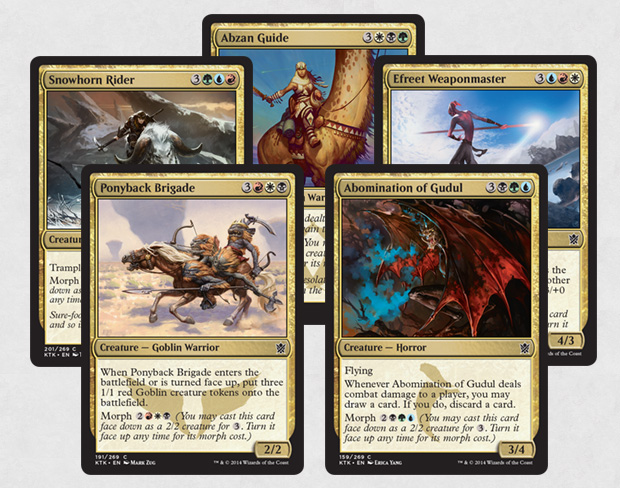 Since you will have a little more than a pack to pick up fixing, and you don’t want to prioritize it over powerful on-color cards for your first two colors, you generally won’t have more than two to four lands. This means your deck will be heavily in two colors, only splashing a clan for a couple powerful effects or morph cards (which are naturally easy to splash). You ideally won’t have to play any basic lands for your splash color, so try to stay geared towards your primary colors unless there is a really good reason to dip into a third color. If fixing is rampant and powerful clan cards are everywhere, you can go heavier on your splash than normal, so remain open to land signals.

This is basically case two with a couple of differences. Since the great rare you opened is already on color, you will want to try and remain in those two colors, to a degree, to enable you to cast your bomb faster and more often than you would with a heavy splash. Your deck is already packing more of a punch than most decks at the table, so you can wait until later to pick up on signals. Try and remain on-color for now (you’ll be able to cast your spells on time without sacrificing much of the raw power of a three-color card).

Since you can wait until late for signals, there is a higher chance those signals will hold true in future packs, since you’re picking up signals from what people closer to your right are sending as well. This is obviously the best case, but will be quite rare.

All of your strategy for what deck you’re playing should have boiled down to packs one and two. This pack is primarily to provide a few extra cards to round out what you’re missing for the deck. Go into the pack knowing how many creatures you need (you want 14 to 15 total), how much removal you want (Ideally at least four ways to interact, largely interchangeable with combat tricks in aggressive decks), an idea of what your curve looks like (if you only have one two-drop, look to pick up a couple more), and how many lands you will need to have a consistent, well-rounded deck.

If you already have 18 or so good cards, you should also prioritize lands more highly, since you don’t need a lot from the third pack and achieving more consistency for the cards you do have is very important.

Just as a note, every time I have done this strategy, I have ended up with at least 16 playable cards going into pack three, and usually more like 18. This makes your reliance on and the importance of this pack pretty negligible, since picking up five to seven good cards from a 14-card pack won’t be hard to do. This is another reason why this pack is not as important as pack two, besides the reasons listed above.

I hope this primer on the FKK format was helpful. What do you think about this strategy? Have a different approach to the format? Let me know what you think in the comments.