Gen Con, where every game that doesn’t require electricity is located. I can now agree with the motto: Gen Con is “the best four days in gaming.”  With all the choices available, it was hard to choose which games were worth giving a shot. Since I’m terrible at decisions, I just played Magic: The Gathering all weekend.

I’m kidding, I’m kidding. Well, sorta. I bought a couple new Krosmasters arena figures and some starter decks for another TCG attempting to revive its fanbase, The Spoils. I’ll talk more about the new games, experiences, and non-related MTG gaming on my site. 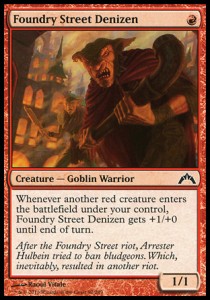 Surprisingly enough, I played my first M15 Limited event at Gen Con. Since I worked all prerelease weekend and I was trying to save money to attend Gen Con, I never had a chance to eliminate the bad taste of M14 out of my mouth.

I entered a 6-4-1-1 draft, (8-4 queues didn’t exist at Gen Con), and cracked my first pack. Every card seemed lackluster, with [card]Aggressive Mining[/card] for the rare and a set of last-pick uncommons. [card]Frost Lynx[/card] was the only blue playable, so I decided to take it over a [card]Foundry Street Denizen[/card] (yes, the pack was that bad). The next pack was just as rough, with another set of last-pick uncommons and the rare missing. There were no blue playables, so I grabbed an underwhelming [card]Borderland Marauder[/card], hoping to table the [card]Goblin Roughrider[/card] if the Foundry Street Denizen tabled from pack one.  With a fifth-pick [card]Inferno Fist[/card] and sixth-pick [card]Generator Servant[/card], I felt comfortable with staying in red. Both [card]Foundry Street Denizen[/card] and Goblin Roughrider tabled followed by a second-to-last pick [card]Peel from Reality[/card], just in cast blue was open in pack two.

I opened [card]Ajani Steadfast[/card] in pack two, taking it over a [card]Lightning Strike[/card] (which is of course the correct pick). I only had two blue playables, so white was a possible splash, but regardless, the Strike is still the correct pick to stay on color.  In the third pack, I opened [card]Soul of Shandalar[/card], and again took the money over a correct-pick [card]Lightning Strike[/card]. My curve didn’t exceed three CMC yet, so I knew I wasn’t playing it if didn’t have to. Criticize me all you want, but I wanted my draft paid for. Man’s gotta eat, am I right!?!

Though I haven’t played enough M15 to know, I would guess this is not a popular archetype. I would assume whoever is playing white tokens would have laughed at this deck, but I say if enough pressure is applied, they either have to block to preserve their life total or keep their convoke high in hopes that I don’t have a [card]Cone of Flame[/card] when they tap down lands and creatures for a [card]Triplicate Spirits[/card]. These are all corner cases though.

I would probably go on record labeling this a tier-two M15 archetype, but boy was it fun! [card]Peel from Reality[/card] made for some amazing plays and synergistic blowouts. It combos with [card]Forge Devil[/card] to kill 2/2s, [card]Frost Lynx[/card] for extra [card]Frost Titan[/card] triggers, and also provides extra triggers for [card]Foundry Street Denizen[/card]. Both Peel and [card]Quickling[/card] were used offensively with Denizen triggers, removing large threats with little cost to my cheap creatures, and targeting the token from Goblin Rabblemaster before blocks. It was used defensively to save Rabblemaster or Brood Keeper.

I didn’t drop a game and split with a friend in the finals since the payout difference was only one pack. Plus, we wanted to get in another draft.

Since the first draft went so well, I think I was on a red kick. Here’s how my second M15 draft ended up.

With a first-pick [card]Liliana Vess[/card] (cha-ching), I drafted toward RB, but the black never came.  The abundance of removal made a late-pick [card]Undergrowth Scavenger[/card] easy. Assuming red is usually weak to fliers, I thought [card]Netcaster Spider[/card] was a great end-of-pack present to enable more burn to my opponents’ noggins.

The big question was whether should I play Liliana Vess or not. Most of the time I would say no, unless you have an abundance of bombs you would like to tutor up. My creatures didn’t really work well with each other. [card]Foundry Street Denizen[/card] and [card]Forge Devil[/card] usually don’t play well with a [card]Siege Wurm[/card]. What did work well with my creatures were my spells. It sounds like a general statement, but let me explain: 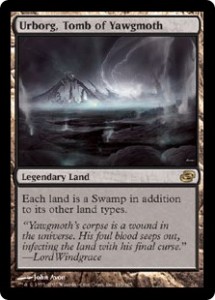 Does that make Liliana worth splashing? I think so. It’s not every day you draft a tool-box deck.  I went with the YOLO reasoning and splashed two swamps and the [card]Urborg, Tomb of Yawgomoth[/card]. I either had to play two Swamps and an Urborg or zero swamps and the Urborg, but going the first route also allowed me to [card]Nissa’s Expedition[/card] for both swamps. This strategy was better than the extra [card]Rummaging Goblin[/card] or the [card]Naturalize[/card] in the side.

I played UW fliers in round one. A game-one mulligan to five and never drawing the second land led to a loss. In game two, I mulliganed to six with a good mix of card types but no removal.  My opponent mulliganed to six and kept a one-lander on the draw—then ripped land, land, land, land to curve out a one, two, three, and four-drop flying creatures on time. Variance just wasn’t on my side this draft, but I thought the deck was worth sharing. I played some games later with some friends and fans to see how it held up to other draft decks and it performed well, as I expected. 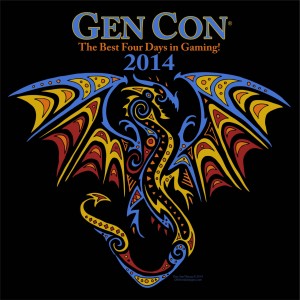 Though my trip was on a tight financial budget, I thank all my friends and family who helped make this event a possibility.  As I say all the time on Tap N Sac, MTG is only as good as the friends you roll with. That said, shoutout to Ricky for winning the 12.5-hour Grand Melee tournament to take home a foil sheet of uncut Modern Masters, and to Ed for hooking me up with a sweet place to stay.

@TNSGingerAle     -     Email     -     Articles Houston is the host and creator of Tap N Sac Podcast. He enjoys any format with a healthy community. He usually taps Mountains to have fun and taps Islands to win.
Previous Episode:
Brainstorm Brewery #111 – Runs On The Market
Next Episode:
Pitt Imps Podcast #83 AMA