I Find Your Lackey of Faith Disturbing 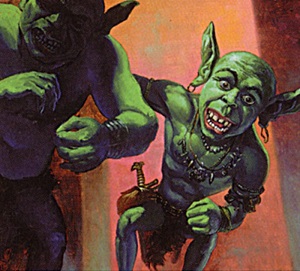 So I was kind of hoping that there would be some updates to the Legacy Banlist I could look at the new format, brew some new decks, and hope that [card]Show and Tell[/card] would finally get banned. But no, all is well. So what is there to talk about? Well my last article looked at some of the non-blue alternatives in the format but there’s one that I wanted to save all on its own because I’ve been playing it an awful lot lately, and it deserves more love. The deck in question is Goblins.

The tribe is a Magic mainstay, appearing in almost every set released, and for a long time, the tribe dominated Legacy. However, in recent years the little red men have had a hard time dealing with changes to the format. That being said, it has had a history of punishing blue midrange and control decks and seeing as the format is currently favouring those decks, it looks like it could be a good time for Goblins to make its return.

No matter what list you see, every Goblins list is going to contain a playset of five cards that are ever present in the seventy-five.

Goblin Lackey is possibly the best card in the deck and is the primary way the deck generates board advantage. A turn one Lackey off of [card]Cavern of Souls[/card] is the best opening play Goblins has and can lead to some absolutely blistering starts. Having the ability to drop a Ringleader on turn 2 is not only a way of filling up your hand for the early game and establishing card advantage, but it can also make mulligans less harsh.

Lackey does have a big problem, though, in that it is blocked by [card]Deathrite Shaman[/card]. The printing of Deathrite was one of the last nails in the coffin for Goblins as the powerful start of a turn one Lackey, was countered by an equally powerful turn one Deathrite. There are ways around it, of course, but it certainly made the format hostile to the red one-drop. That being said, all Lackey ever needs to do is connect once and it’s provided you with some from of advantage and is the primary reason the deck still has game.

Tutor effects in Eternal formats are nuts. And this one is no exception. Goblin Matron is part of the reason this deck functions so well as a control deck. Most of the time, you’ll be fetching a Goblin Ringleader but including four copies of Matron allows you to build the deck to have a suite of one-of silver bullets that you can fetch when you need to. Allowing this to resolve can often times swing the game in your favour, picking up a much needed Ringleader or perhaps a [card]Siege-Gang Commander[/card] or [card]Tuktuk Scrapper[/card]. Not playing Matron in Goblins is a move that you need to have a good reason for doing. 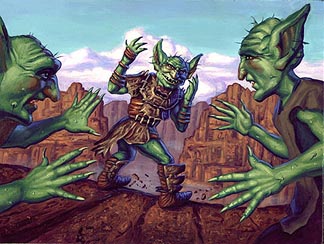 Very few four mana cards get high praise in Legacy and Ringleader is one people always seem to ignore. Yes, it’s not got amazing stats but it effectively draws you 2-3 cards when it enters the battlefield. There is nothing more satisfying than flashing in a Ringleader with [card]Aether Vial[/card]. Ever since it was printed it’s been included in Goblins lists wherever it can. It’s one of your best cards against Shadless BUG and it can often be the way you turn a near unwinnable game to one you are in full control of. And yes, it does whiff. But being able to clear four non-Goblin cards from the top of your deck is at least somewhat of a plus, surely?

This is another card that facilitates blisteringly fast starts from Goblins. The cost reduction is incredibly significant and granting all of your Goblins haste is an incredibly overlooked ability. Being able to activate a [card]Krenko, Mob Boss[/card] the turn he drops is insane. I’ve seen some lists run Warchief as a three-of but I honestly think that he enables such an aggressive strategy and allows you to get multiple Goblins in play a turn is reason enough to play the full four copies.

Vial is a card that just fits right at home in tribal strategies, from Merfolk to Slivers to Goblins. The ability to dodge countermagic and operate at instant speed means that you free up your lands and can instead spend your mana activating Wastelands and Rishadan Ports. Vial is also key in getting your mana intensive Goblins into play, like Siege-Gang Commander and Goblin Ringleader, though hardcasting them is not an impossibility. Regardless, Vial is another automatic playset.

So that’s the glue of the deck. The above cards should be present in every Goblins list you see or build and should be the foundation from where you build your rabble. But what do we use to fill out the rest of the sixty?

A good place to start is removal and with that I believe everyone should be running four copies of [card]Tarfire[/card]. The presence of cards like Deathrite Shaman, [card]Stoneforge Mystic[/card] and [card]Delver of Secrets[/card] means you need to have cheap creature removal and Tarfire is the perfect answer. Not only does it deal with most every creature in the format, it can also be found off of Ringleader and Matron, which is huge. However, do remember that you can’t cast Tarfire off of Cavern of Souls as it specifies that it can only be used for creature spells. Still, Tarfire is, what I believe to be, the best removal spell that Goblins has access to.

Most lists will often include some number of [card]Goblin Chieftan[/card]. Chieftan is often times a finisher, turning your Siege-Gang tokens into legitimate threats. Cheating this into play with Lackey can often set you up for an early kill and demands that your opponent answers the lord. I’m currently running it as a two-of but I’ve seen people play as much as four copies in the main.

You’ll also find people playing some number of [card]Mogg War Marshall[/card] as a general value card and way of chumping big threats like [card]Tarmogoyf[/card]. [card]Gempalm Incinerator[/card] is a card that used to see much more play but is now usually there as a single Matron target. While I’m not a huge fan as it can often be a dead card, it is one of the few ways that Goblins can deal with Tarmogoyd or [card]Batterskull[/card].

Goblins also packs some form of artifact hate in the form of either Tuktuk Scrapper or [card]Tin-Street Hooligan[/card]. There are pros and cons to both. Scrapper costs four mana but can be played in monocolored versions, where Tin-Street costs less but means you have to be playing green and also has some serious anti-synergy with Goblin Warchief. I prefer Scrapper as I’m not running green but both cards are excellent additions.

There are tons of other Goblins that you can include, most often as Goblin Matron targets. The ones that I’m including in my list are Krenko, Mob Boss, [card]Grenzo, Dungeon Warden[/card], [card]Kiki-Jiki, Mirror Breaker[/card], Siege-Gang Commander, and [card]Goblin Piledriver[/card]. I’ve also seen people run [card]Goblin Rabblemaster[/card], [card]Warren Weirding[/card] and [card]Skirk Prospector[/card]. These utility cards are all excellent and depending on what your meta is like, you can tailor your main deck to have the perfect angles of attack. 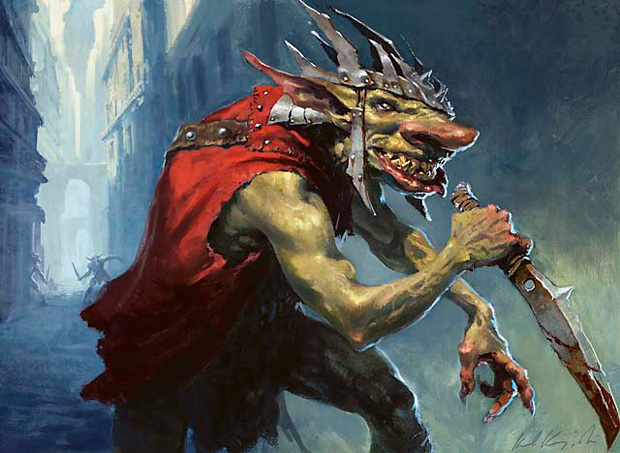 Goblins plays a great mana denial game and is often compared to Death and Taxes in some ways. To start, the deck plays four copies of Wasteland and Rishadan Port. Using Aether Vial to get your creatures into play frees up your mana to be used to take care of the opponent’s mana base. Having the ability to grind out the opponent using card advantage and mana denial is one of the reasons this deck still has an awful lot of game.

Goblins also runs four copies of Cavern of Souls, for obvious reasons. Most any tribal deck should be running four Cavern but especially so in Legacy where [card]Counterbalance[/card] and other forms of cheap countermagic rule the roost. In the post board games, it can also be set to human and you can get through a copy of [card]Thalia, Guardian of Thraben[/card], a card that has found its way into Goblins sideboards since it was printed.

Finally, the last few slots go to any fetchlands that can fetch a mountain, 2-3 duals if you’re splashing any colour, and then a few basics to round out the sixty.

And that’s Goblins! The deck is relatively cheap to put together and has a low skill barrier, meaning that it won’t bite you for not playing absolutely 100%. That being said, a skilled Goblins player is a geniune threat and putting in the reps with the deck can make you a formidable enemy, even in the face of the pesky Golgari mana elf.

Previous Episode:
Brainstorm Brewery #180 – You’re Not Even A Judge
Next Episode:
Unified Theory of Commander: Synergy

One comment on “I Find Your Lackey of Faith Disturbing”