One of the topics that is often discussed in MTG is liquidity. Liquidity is the degree to which an asset or security can be bought or sold in the market without affecting the asset price. All things equal, it is better to speculate on cards that have higher liquidity because more liquid cards are easier to move.

But that’s not the whole story. There is another related economic term that I don’t see finance writers talking about and that is inventory turnover. Inventory turnover is the ratio of how many times an inventory is sold and replaced over a period.

The gist of it is this: how many good specs can you find over a period of time to maximize value gained over that time? 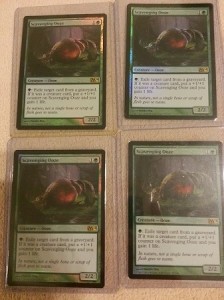 I bought not one but TWO playsets of foil [card]Scavenging Ooze[/card] at $24.00 each ($96 per playset), thinking that I was ahead of the game. Funnily enough, it first rose to $30 on eBay during the period before rotation, until rotation hit and the price dropped like a rock to the current sub-$20 price. This spec makes me cringe because of how greedy and wrong I was.

I had a chance to get into a discussion point with Sigmund Ausfresser, one of the writers at Quiet Speculation.

You can view the tweets?here.

The question was one of his specs, [card]Restoration Angel[/card]. I have immense respect for the guy and for his writing, but as a fellow speculator, I cannot help but point out my view when I disagree with a spec.

Here’s a third example just to really get the idea across.

On the MTGFinance subreddit, someone mentioned the possibility of speculating on the currently-unplayed [card]Ral Zarek[/card], the planeswalker from Dragon’s Maze. In all honesty, I like the spec a lot. The card is unlikely to see a reprint anytime soon after dodging the Duel Deck bullet and being a mythic from the third set, the supply is capped to say the least (see [card]Voice of Resurgence[/card]). There is at least a probable case that an Izzet god will be printed in Born of the Gods based on the description of the god Keranos, and Ral Zarek seems like a natural fit for devotion with the ability to untap [card]Nykthos, Shrine to Nyx[/card].

You can view the thread here.

Where did we all go wrong?

The question is not whether the specs are good or not, all the specs are great and have reasonable upside (well, maybe except my [card]Scavenging Ooze[/card] spec). Before going deep into a spec, the question we want to ask ourselves is this: Is this the spec that is most appropriate for the current time frame? That is to say, is the card that I am buying/trading into the lowest that it is likely to be, and is it also the card with the most likely upside in the near future?

As for the case with Sig, I 100% agree with him that [card]Restoration Angel[/card] is a great card to have, but the question is whether it will go up anytime in the near future. There are currently 200+ copies sitting on TCGPlayer just between the prices of $4.99 and $5.00 alone, not counting the copies that are even lower and the 200+ listings on eBay. My best guess is that it will take at least a year for the prices to budge upward, and the prices are likely to continue to go down during that time. If vendors want to sell their copies, they will have to lower their prices from the current TCG average of $5.00.

Back to the example in the MTGFinance subreddit. [card]Ral Zarek[/card] is a great spec with a good amount of upside, but the question is the time frame. There are currently no competitive decks playing the Izzet planeswalker, and I don’t foresee it being a thing before Born of the Gods when the Izzet scry land may be released. That gives us another two months or so for the card to drop before spiking.

Now you might be thinking, “Well, tough guy, great job criticizing everyone’s specs. What about a spec that actually works?”

Great question! Segues sure are easier when you’re talking to yourself.

I would like to introduce Post Modern, a segment where I (surprise!) post about the Modern format. I’m hoping to have a pick every article, subject to changes within the Modern metagame. 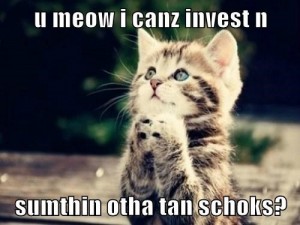 Ask and you shall receive.

The last few weekends have been incredibly exciting for Modern players, from GP Antswerp, the largest Modern GP to date, to the TCG 50K which featured a total of seven rounds of Modern. Live coverage of a format is the best way to garner attention and attract more players, especially for a format as explosive yet unexplored as Modern. Patrick Dickmann piloted Tempo Twin and won GP Antswerp, a great way to demonstrate that BGx does not have a stranglehold on all of Modern as naysayers would like to believe. There is plenty of space for new innovation, as we saw on the weekend of the TCG 50K where Brad Nelson showed up with a UB Merfolk Devotion deck that crushed Jund on camera. There yonder was a sweet brew if I ever saw one.

The card that I’m talking about is [card]Threads of Disloyalty[/card], played as a three-of in UB Merfolk Devotion and as a two-of in the sideboard of Tempo Twin.

In an environment where [card]Abrupt Decay[/card] is becoming less prevalent because of decks that make it a dead card, [card]Threads of Disloyalty[/card] is increasingly becoming the answer to midrange. The card is incredibly powerful in Modern because it is able to hit most of the field, including all five of the top five most-played creatures in Modern (based on MTGGoldfish: [card]Deathrite Shaman[/card], [card]Spellskite[/card], [card]Tarmogoyf[/card], [card]Dark Confidant[/card], and [card]Snapcaster Mage[/card]). At worst [card]Threads of Disloyalty[/card] is a 1 for 1, and if the opponent has no answers, it is effectively a 2 for 1. Gaining control of an enemy [card]Tarmogoyf[/card] can be game changing.

[card]Threads of Disloyalty[/card] recently spiked from $12 to $16 on MTGO, while paper copies have yet to follow suit, still resting at $6. At time of publication, there is a 25% spread, with Card Kingdom paying $4.60 on copies of the card.

I believe that this spec is poised to double sometime over the next six months, barring a reprint, and now is the lowest point for the card.

Comments on the spec? Needs more lolcat? Join me next time for more specs and talk about Modern! Hope to see you then.

@fyawm     -     Email     -     Articles Tim Enmou Gao is a writer for Brainstorm Brewery and resides in Los Angeles. A Modern-phile at heart, he is currently piloting a RUG Delver. You can reach Tim on Twitter or /u/fyawm on Reddit.
Previous Episode:
Andrew Colman – The Puzzle Box: A New Take on Starting a Cube
Next Episode:
Anthony Capece – Rare is the New Uncommon