Welcome back, brewers. Today we are going to be talking about Standard. Were you as sick of the last Standard format as I was? See ya later, [card]Lifebane Zombie[/card]. Thanks for making life miserable for us GW mages.

Anyway, I was an avid GW player in the old format. I loved the beef of my giant creatures and just crashing through. The deck always felt like it needed removal, though. So obviously when it came time to switch over to the new format I picked up Abza… Jeskai Tempo.

The Jeskai Tempo deck that Kevin Jones played to win an SCG Open feels great. All the spells feel really powerful and it feels like it rewards good plays. Jeskai seems like it has a really good place in the format. It can burn and block the aggro decks, while flying over the green decks. I also really didn’t have a problem against my control opponents, at least so far.  The deck also feels like it can be modified to fit any metagame, which will give it a lot of staying power as long as people adapt to it. Name aside ( I think it should be called Jeskai Burn as there really isn’t much tempo to it), this is a really solid choice for any player moving forward.

So you want to play Jeskai Tempo, too? Great, that’s probably why you’re here, and you’re in for a treat because we are going to break down each card choice in the Kevin Jones special right here.

This, in my opinion, is the reason to play the deck. There are a lot of green decks that play a lot of big ground blockers. Mantis Rider is able to swoop overhead and bash the opponent for three. Worst case, he will make your opponent waste their turn with a removal spell. If not, you get to attack again and again. He is also especially good at dealing with planeswalkers. Bye bye, Xenagos. 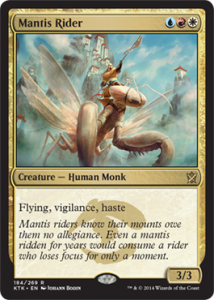 Many people have already talked about why this guy is so good. In this deck he can win games on his own. You are able to clear the way with your burn or again force your opponent to spend their turn to deal with him. Having two in play is absurd.

Now here’s a card. This is a two drop that lets you start attacking early. The fact that he’s a 2/2 lets you swing past opposing Caryatids with the bluff of a burn spell to the face. The lifelink is huge against aggressive decks, but is also equally good against midrange decks. Often times the midrange player will stabilize at a low life and start attacking. You are drawing off the top of your deck looking for that last burn spell. The higher your life, the more turns you have to draw your out. I think this could be a four-of.

Magma Jet is a very versatile card. It can help you set up your draws early so you get that third color of mana on turn three, or it can dig you into that last burn spell off the top when your opponent is low on life and stabilized. It can also kill an early mana creature. The only real downside is that it only deals two damage.

I think this may be one of the weaker cards in the deck, but it is still necessary. This deck wants to be able to cast two cards in the late game and this will definitely help. Three early damage or being able to kill a Rabblemaster is not too shabby, either.

Four damage for four is great. Four damage for less than four is insane. Be sure to be aware that you can tap your Rabblemaster tokens to avoid the suicide attack. You can also tap the [card]Mantis Rider[/card] after it attacked for some more free mana.

This card gets everything out of your way. It’s nice to have a way to remove a creature that has five or more toughness. Its also very good at removing the god weapons that gain life, [card]Bow of Nylea[/card] and [card]Whip of Erebos[/card]. These are continual sources of life gain that you may have a hard time beating.

This card does everything from four to the face to putting a big blocker back on top of their deck to gaining life and winning the creature war in an aggro matchup. You don’t need me to tell you why this one is good.

This card is very good in the late game, obviously, and there is nothing you want to draw more in a long game against a removal deck. Being able to choose two of seven sets up your perfect next turn, from double [card]Goblin Rabblemaster[/card] to eight damage to the face. Often you can tap five lands on turn five and cast it. This card gives the deck reach against slow decks. I’m not so fond of it in the aggressive matches.

At first, I hated this card and refused to play it. Then I started to warm up to it. Now I feel like it’s the first card out of the deck if you want to try other cards. This dives deep to provide some additional cards, but your opponent will not give you the one that will win the game. This also fuels delve, so it shouldn’t be overlooked in a non-aggressive meta.

Chandra’s plus-one really shines here. Not only can it remove a blocker, but sometimes it can kill that annoying elf or satyr or human that’s in the way. Clearing out a bigger blocker to get your Rabblemaster through is huge. I haven’t been too fond of the zero ability in this deck, as it feels like you always have things to do, unless the game goes very long. I’ve never ultimated her but that probably feels really good.

Sarkhan or Stormbreath? The debate rages on. I think Sarkhan is better in this deck because you really want the versatility. You sometimes want to clear the way and kill that [card]Courser of Kruphix[/card]. Indestructibility is cool, but it still will die to a [card]Hero’s Downfall[/card] before the activated ability resolves. I think the dragon could be better in a meta of lots of white removal.

Not much to say here. The lands help you cast your spells. You need all three colors to function. Some tips:

Join us next time when we discuss the Jeskai deck against the different decks in the meta. Thanks for reading and remember: burn them in the face!

@RyanArcherMTG     -     Email     -     Articles Ryan Archer is a PTQ grinder and a Magic financier. When he's not making top eight in a tournament or looking for the next card to spike, he's playtesting as a member of Team RIW or writing articles for BrainstormBrewery.com or MTGinfosource.com
Previous Episode:
Pitt Imps Podcast #89 New Standard Decks Finally
Next Episode:
Conjured Currency #34: One More Card