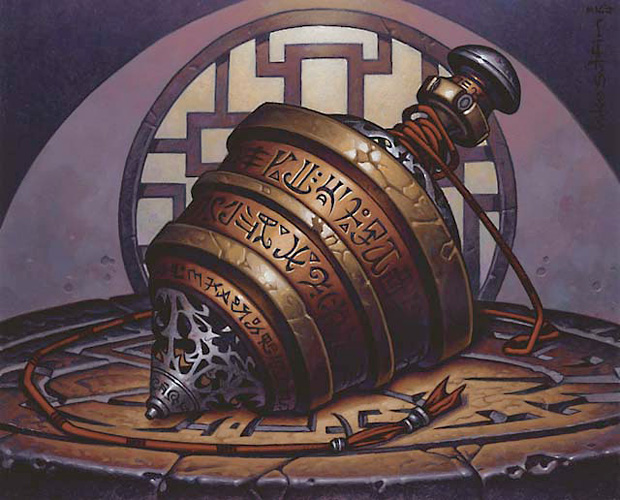 Grand Prix Lille was two weeks ago, and before I get to the story of how my own trip went, I want to talk about the Grand Prix itself, what performed well, and what that means for Legacy.

Looking at the top 8, we see two Miracles decks facing off against each other in the finals, with the eventual champion of the event, Claudio Bonanni, piloting a list with both Monastery Mentor and Daze, much like Kazuya Murakami’s list from his top 8 at GP Kyoto earlier this year.

Monastery Mentor allows the deck to take a proactive stance when needed, especially when it is backed up by Daze. Daze also gives you more ways to fight decks like Omnitell, and significantly increasing your chances of winning the counter war on the turn two Counterbalance in the mirror match. On the other hand, having these cards in your deck does have its drawbacks, such as making your opponent’s Terminus more live, or drawing a Daze on turn seventeen. Still, the upsides are very much real, especially so when you considering the surprise factor, and how much better a card like Daze gets when your opponents don’t expect you to have it.

Backing up a bit we see a top 8 that looks as follows.

Here we see that several archetypes managed to put multiple copies in the top 8. Miracles has been largely accepted as the default best deck for a while now, and it had no problems living up to its reputation this time. Interestingly enough though, both Four Color Delver and Aggro Loam, the breakout decks from Prague Eternal, saw two players finishing in the top 8, suggesting that they may more than just ‘good decks’, but actual contenders for the title of ‘the deck to beat’. For the time being, that honor remains with Miracles, but it is refreshing to see more archetypes doing so well.

The two Four Color Delver lists from the top 8 of GP Lille share 58 out of 60 cards (not accounting for different fetchlands), and Pets Sochurek’s maindeck is identical to the one Tomás Már made the top 8 of Prague Eternal with.

Back then we had multiple versions of the deck. Here we see both players playing a more streamlined mana base. We see both players opting for Tarmogoyf over True-Name Nemesis, and Spell Pierce over Thoughtseize. It seems we are getting to a consensus for the what the stock list of Four Color Delver should look like.

Broadening our scope to the top 16 we see multiple copies of both Storm and Omnitell falling just short of top 8. I think this is in part due to more people finally having figured out how to combat Omnitell. Still, the two decks did account for nearly a third of the top 16, and they are definitely forces to be reckoned with. Notice how two out of three Storm players in the top 16 opted to go with the additional kill conditions and business spells, each packing two copies of Tendrils of Agony and a single Empty the Warrens, as well as the second Past in Flames. Enabling the natural combo more often seems like a most excellent idea when your opponents plan to fight you with countermagic, and I like this idea a lot.

There is more innovation to be found in this top 16, such as three copies of Sulfur Elemental out of Martin Vonasek’s Storm sideboard, and Lukas Blohon playing Monastery Mentor over Young Pyromancer in his Omnitell sideboard. Overall though, the top tables at Grand Prix Lille showcased a perfect example of beautiful deck construction; tweaking good decks to beat the opposition while not getting cute doing so.

Going forward I expect both Four Color Delver and Aggro Loam to be considered a force to be reckoned with. At this point they have been putting up consistent results over two larger tournaments. When you have a deck that is powerful, consistent and proactive, that is a recipe for success, and now we have two.

I’ll be interested to see how the metagame will adapt to these newcomers among tier 1 decks. The banned and restricted announcement brought no changes, so we won’t see that shaking up the meta game for at least a while. For now though, two new and powerful contenders have joined the scene, and the rest of the format in turn will have to adapt.

I am also very curious as to what the evolution of Miracles is going to look like. Carsten Kotter has been experimenting with a list completely foregoing Swords to Plowshares in the maindeck in favor of more countermagic and library manipulation to make you better positioned in the mirror, as well as against the combo decks. Claudio Bonnani’s list featured Daze and Monastery Mentor, whereas Olivier Ruel was on a more traditional list.

As for how my own tournament went, I ended up going 4-4, drop with Goblins. Despite my poor record however ö I still had a great time in Lille. I got to eat good food and socialize with my friends. I got to meet many other legacy players and talk to them about the format. I met with GoboLord, who has written the opening post on the Goblins thread and is one of the best and most dedicated Goblins players in the world today, and we had a long and informative discussion, sharing our thoughts about the deck with one another. I got to play some very memorable games, and if you want to know more in detail how my matches went, be sure to keep an eye out on the Goblins thread.

I was happy with how I played and I had a decent list. I can’t complain about my draws or my matchups, nor about the quality of my opponents’ draws, and still I only managed to put up a mediocre result. This has made me realize what I’ve been fighting to disprove for so long; if I want to consistently put up great results in Legacy, Goblins isn’t the way to go. I still love the deck and I’m still confident it can put up good results (hat’s off to Aston Ramsden’s 152:nd place finish), but it’s time for me to start working on something else. I will still keep playing Goblins at my local legacy weekly tournaments. The deck is my baby after all and I love working on the puzzle that is tuning it, but by the time GP Seattle comes around I will be playing something else. I’ve made my decision and accepted what I need to do. Now I have a lot of catching up to do. In the meantime, does anybody have a deck I can borrow on Magic: Online? I have to get to work on Legacy.