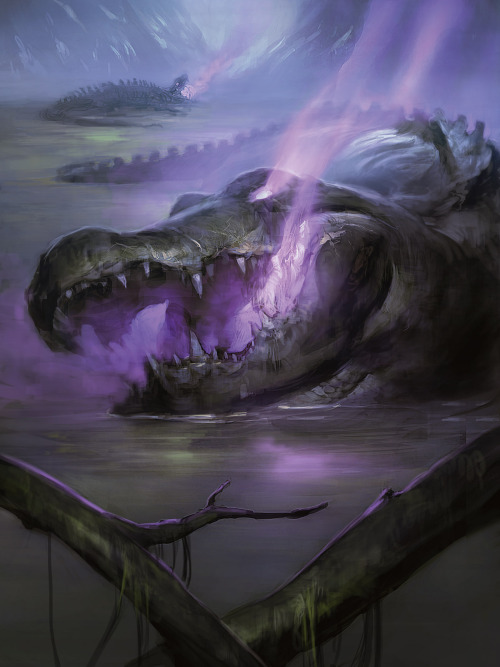 Last weekend, with the StarCityGames Open at Indianapolis, we saw our first glimpse into what the new Standard format looks like.  There were a lot of really interesting decks that performed well and we saw some card choices I hadn’t anticipated.  I thought Brian DeMars did an incredible job of tuning his Atarka Red list and it’s the deck I could never in a million years think about being ill-prepared for when Battle for Zendikar cards are available on Magic Online.  Quite a few articles released during the week that preceded the event were starting to write the deck off because of the lack of good burn options.  However, DeMars found the reach he needed in [card]Titan’s Strength[/card], [card]Temur Battle Rage[/card], and [card]Become Immense[/card].  [card]Arashin Cleric[/card]s collapsed in vain, unable to save their Abzan pilots from the ridiculous 15-20 points of damage they were dealt in a single combat step.  I play Magic: the Gathering online exclusively.  I don’t have a paper collection, so I have to be ready to weather the storm.  This deck will be everywhere online.  Droves of angry spikes are going to be spamming every bot to get their hands on [card]Cinder Glade[/card]s and submit their, in the words of Shaheen Soorani, knucklehead [Atarka] red decks for 8-man queues.  So, how do we beat it?

It’s easy to say that red always wins week one of a new Standard format and that it’s easy to hate it out of a metagame.  This new list feels different, more explosive and potentially more resilient.  It only needs one threat and the right mix of combat tricks to deal 20 points of damage.  I don’t like [card]Arashin Cleric[/card] AT ALL in the face of a 9/10, double striking, trampling [card]Monastery Swiftpear[/card].  I want an instant speed answer that 3-for-1s my opponent.  These are some of the tools I’m most interested in exploring for the Magic Online Standard metagame. 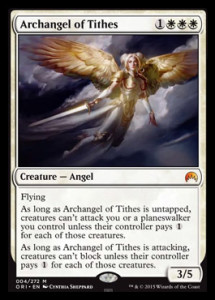 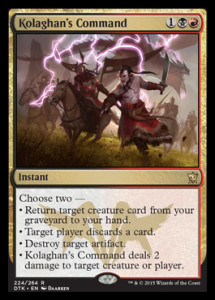 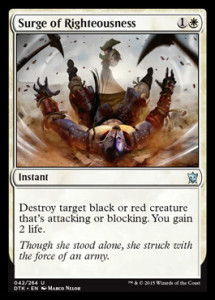 Now, I’m not necessarily saying to throw them all into one deck.  But I think that [card]Archangel of Tithes[/card] is incredible against Atarka Red.  I’ve covered the reasons why in my first article, but let’s review just why this card is so good against red decks.  First of all, it doesn’t die to [card]Roast[/card] or any of their other removal spells.  Second, Atarka Red requires mana to execute its gameplan.  Prowess requires casting additional spells to increase the damage output of [card]Monastery Swiftspear[/card] and [card]Abbot of Keral Keep[/card].  Dash is a powerful mechanic that really pushes tempo to allow Atarka Red to force additional damage points through, but again, it requires a mana investment every turn or the Atarka Red player has to take a turn off attacking to simply cast the creature.  The combat tricks that Atarka Red relies on, though cheap, are most effective when used in unison.  Having the mana to cast them AND being able to pay for the angel’s tithe is not frequently feasible.  It’s very hard for DeMars’s tournament-winning list to win once an Archangel of Tithes has resolved.  In the previous Standard format, [card]Stoke the Flames[/card] and [card]Exquisite Firecraft[/card] allowed the red decks to at least burn out mono white if the red player was able to get in early damage and then procede to topdeck enough burn spells to close out the game.  Those burn spells have either rotated or are not making the cut.  The downside to Archangel of Tithes, of course, is that it costs 4 mana and is a key card against a deck that can kill on. . . you guessed it! Turn 4.  That said, the shell Archangel fits in is the fairly aggressive mono white deck designed by Justin Heilig at the end of the last Standard season.  With 6 one-drops and a fairly low, interactive curve, it should reliably get to turn four with a healthy life total.

*4 Knight of the White Orchid

*2 Foundry of the Consuls

*3 Mastery of the Unseen

This deck has changed a bit since the previous Standard format.  [card]Mastery of the Unseen[/card] just isn’t as good as it was in the dark, so it’s relegated to the sideboard.  Don’t get me wrong, it’s the most powerful card in the sideboard.  Justin and I once joked about whether it was right or wrong to keep six lands and a Mastery on the play against Esper Dragons and we actually think it’s correct to do so.  Let’s go over some of the other changes/additions.

Dragon Hunter:  Basically as close a replacement to [card]Soldier of the Pantheon[/card] as you can get.  It has a relevant protection ability, allowing it to attack past or hold off either [card]Dragonlord Ojutai[/card] or [card]Thunderbreak Regent[/card].

Consul’s Lieutenant:  This card has improved A TON in the new format.  [card]Sandstone Bridge[/card] is a great way to force it through on turn three and there are fewer nuisances like [card]Courser of Kruphix[/card] and [card]Fleecemane Lion[/card] to get in its way.  Once renowned, having the ability to attack through [card]Deathmist Raptor[/card] is great.

Silkwrap: With [card]Jace, Vryn’s Prodigy[/card] and [card]Hangarback Walker[/card] seeing as much play as they currently are, it’s a safe bet that [card]Silkwrap[/card] is VERY seldom dead in any given match-up.  This is just an incredibly efficient removal spell and a more important tool in the maindeck than [card]Valorous Stance[/card].

Stasis Snare: This piece of removal is fantastic and is part of the reason why this deck could still be viable.  Just hope [card]Silkwrap[/card] hits [card]Hangarback Walker[/card] before you cast a [card]Stasis Snare[/card] on a [card]Deathmist Raptor[/card] against Green White Aggro ([card]Dromoka’s Command[/card] continues to be one of the best cards against this deck).

Sandstone Bridge: Really solid value land.  Since [card]Knight of the White Orchid[/card] really doesn’t play as well with three mana spells, this card is your ideal turn three land drop in a lot of situations.  It also has great synergy with Consul’s Lieutenant, Hangarback Walker (you mean I can attack AND pump?!), and Archangel of Tithes (pay her mana!).

This deck is still just really solid and consistent.  Ironically, I consider this deck high variance because it has a slightly lower power level but heavily punishes any opponent stumbling with his or her fancy manabase.  Because Atarka Red variants will likely be the most played deck on Magic Online, this deck is a solid approach to tackling that metagame, though it may have less success in a large tournament.

The other card I expect to punish Atarka Red is [card]Kolaghan’s Command[/card].  There seem to be many more relevant targets running around with two or less toughness in this new format than there were a couple of weeks ago.  This card has proven itself to be a powerhouse in Modern and if Standard is ANY more hospitable to it, it’s popularity should rise drastically. Against Atarka Red, if you’re able to cast a removal spell on either turn one or two and follow up with a Kolaghan’s Command on turn three, you’re able to continue to attack your opponent’s board while also draining resources in his or her hand (often the powerful combat tricks that make the deck so explosive).  The shell I most want to tune with it is an archetype that’s taken a backseat for the last couple of years – Jund.

This deck is all about value.  Casting [card]Den Protector[/card] to get back a [card]Kolaghan’s Command[/card] to get back a [card]Den Protector[/card] and make my opponent discard feels great.  [card]Tasigur, the Golden Fang[/card] doesn’t seem to be in any lists I’ve seen and I think he’s still a great option alongside [card]Languish[/card]. And, if you can start activating his ability each turn, it’s hard to lose from there.  [card]Sarkhan, the Dragonspeaker[/card] never had his time to shine, spending his last year hiding in the shadows of [card]Stormbreath Dragon[/card].  He also didn’t have a bodyguard like [card]Woodland Wanderer[/card] to come down a turn earlier and protect him.  I love the concept of Sarkhan in Jund.  This is an archetype that plays a lot of removal, and Sarkhan’s -3 gives the deck additional answers while also providing a reasonable clock to close the game out.  [card]Woodland Wanderer[/card], when cast with four colors of mana, is a 6/6 with vigilance and trample.  This elemental is swinging in every turn, combining with Sarkhan for 10 points per turn, while also protecting his dragon-obsessed pal.

I hope all of you online grinders that aren’t looking to cast as many [card]Atarka’s Command[/card]s as possible are ready for what awaits you.  Mono white and Jund are both decks that I’m looking to continue tuning for the online metagame and are reasonable archetypes for bigger tournaments as well.  I’m excited to see this Standard format evolve in the upcoming weeks and will continue brewing up a storm.  Best of luck to all of you in the new format!