Hey, guys, sorry for the long hiatus. Between the holidays and the Fate Reforge release, I haven’t had much time to do any research for this series.  But here I am, back again to bring you some Commander goodies. I won’t be including price ranges for the upgrades (it simply takes too much time for something that ends up inaccurate very quickly), but I will be making price-conscious decisions to keep the theme of increasingly costly upgrades. 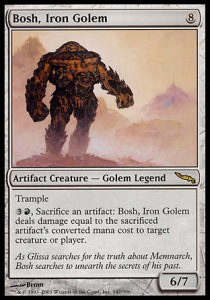 -[card]Dualcaster Mage[/card] – This guy is fine, but really we don’t want to spend our turn copying a spell.  Most often he will be a 3 mana 2/2 flash and that’s not particularly good.

-[card]Beetleback Chief[/card] – Goblin tokens are fine and all but this guy isn’t an artifact and has RR in his casting cost.  We’re trying to play a bunch of artifacts and this guy is hard to cast off a lot of colorless sources.

-[card]Volcanic Offering[/card] – Theoretically, this can kill a bunch of stuff but it’s too unreliable in my opinion. I’d rather take it out of the deck than hope it does what I want it to do.

-[card]Tuktuk the Explorer[/card] – Nothing to explore here. He’s fine as a chump blocker but his artifact has a CMC of 0 and it’s really what we’re looking to do.

-[card]Warmonger Hellkite[/card] – I prefer my hellkite below. This guy might just make us suicide our biggest threats for no reason.

-[card]Spitebellows[/card] – Despite its cool name and art, we would often want to evoke it and it would tie up too much of our red mana.

-[card]Bogardan Hellkite[/card] – I like me some big dumb dragons but this guy is really expensive and doesn’t add much flexibility to the deck.  If I were to play a dragon, I’d rather play an artifact one like [card]Draco[/card] or [card]Clockwork Dragon[/card].

-[card]Commander’s Sphere[/card] – Much like the green decks from last article, this doesn’t provide a lot of ramp or fix our colors so I’m not terribly interested in having it in our deck. 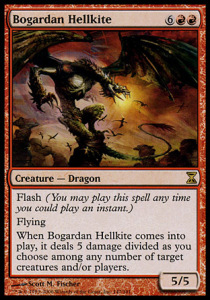 – [card]Thopter Assembly[/card] – This assembly is a little slow but provides a ton of value, giving you tiny little flying thopters to hold down the fort for your bigger cards. Bosh allows you to throw away Thopter tokens when you get low so you can cash in another whole assembly!

– [card]Duplicant[/card] – I’m really not sure why this card wasn’t included. It’s a bit on the expensive side, but its utility cannot be denied. Being able to “eat” your opponent’s largest creature and then throw it at them when you’re done means this guy is an instant include.

-[card]Kurkesh, Onakke Ancient[/card] – If Magic cards could get married, I’m pretty sure Bosh would ask Kurkesh to marry him.  This duo is a match made in heaven as every artifact you throw can now do double damage (or hit two different targets even!).

-[card]Myr Enforcer[/card] – This guy is a little innocuous, but being a seven-mana artifact is great for throwing with Bosh. It also has affinity for artifacts, so often it will end up costing far less than seven mana to cast.

-[card]Dictate of the Twin Gods[/card] – There is already a similar card in this deck ([card]Bitter Feud[/card]), but this one has flash and can be used to set up sweet combo kills with Bosh and expensive artifacts.

-[card]Ward of Bones[/card] – This is an odd card, but in order to keep parity, this will allow you to limit your opponent’s creatures.  It’s also a six-mana artifact ripe for the throwing when you’re done with it!

-[card]Thran Dynamo[/card] – Somehow this ended up in the blue deck and not the red one. I’ll never understand why, but it’s definitely a huge boon to this deck.

-[card]Kuldotha Forgemaster[/card] – This needs a few smaller artifacts to get going (good bye [card]Ichor Wellspring[/card], thanks for the card!) but it allows us to tutor up our big fatties to help end the game. It can also find Bosh in a pinch if he gets shuffled into our deck with effects like [card]Chaos Warp[/card].

-[card]Worn Powerstone[/card] – Did you know the blue deck and the black deck get this card but the red deck doesn’t?  It’s a travesty, really.

-[card]Hellkite Tyrant[/card] – Well, might as well save the sweet dragon for last, right?  This guy lets us steal our opponent’s big artifacts and throw them back at them! That seems like everything a Bosh deck wants to do. 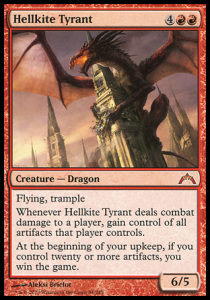 I hope this little exercise has helped you pick out some nice improvements for your copy of Built from Scratch. If you have any suggestions or comments, you know what to do.

@Phrost_     -     Email     -     Articles Jim is a software developer and an avid blue planeswalker. He spellslings in Jacksonville, Florida, and you can feel free to contact him on Twitter at @phrost_.
Previous Episode:
Privileged Perspective 15: Challenging Perspectives
Next Episode:
Pauper Cube: Drafting Tips, Tricks, and Archetypes