Welcome back! I hope your holidays were as relaxing and unproductive as mine were. Even though Christmas is typically Magic’s downtime, there was a lot going on with the beginning of spoiler season. Next week I’m going to talk more about what we are seeing out of Fate Reforged and how to contextualize it, but I do want to start this week with my preview card!

So what I am going to do is assume the Game Day promo is my preview card, and I will do this AS LONG AS IT TAKES until Trick or Gleemax or the corporate fat cats at Hasbro give it to me for real. We can even keep score (starting next time). So let’s see what card I get to start with! 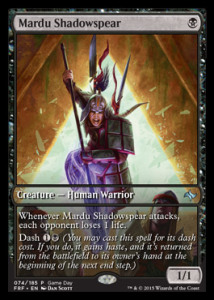 It’s actually fitting that this is my preview card this time around, because I’ve been playing some Mono-Black Aggro lately, and this card is a seemingly obvious inclusion.

There are some deck construction conflicts here, because black now has four playable one-drops, as well as two conditionally playable ones in [card]Cruel Sadist[/card] and [card]Ruthless Ripper[/card]. If you decide to build your deck more synergistically, you can play Shadowspear with [card]Bloodsoaked Champion[/card] and [card]Tormented Hero[/card], which then pushes you pretty strongly towards a small white splash for [card]Chief of the Edge[/card] (and consequentally, some of the better combat tricks). Prioritizing power gives you Gnarled Scarhide over the Tormented Hero, which is essentially a [card]Savannah Lions[/card]/[card]Falter[/card] split card and doesn’t pressure you into playing a very sketchy manabase (likely including some number of tapped lands) in your small creatures deck. I would not recommend playing more than 10 to 12 one-drop creatures in your list, unless you are confident you won’t see Anger of the Gods. If you decide to do that, however, [card]Pain Seer[/card] becomes even more of an automatic four-of than it was already (and it was a pretty big deal before).

*3 Mardu Shadowspear
*3 Master of the Feast

This is the kind of deck I would never pay time and money to play with in a large event, but it is more than capable of stealing wins in smaller, less tuned environments (you know, like FNM). It has some of the qualities that I look for when playing an aggro deck in a small format, but it hasn’t been able to check all of the boxes yet. Here are some of the things going for this archetype that make it well suited to play at FNM.

Overall, there are not many changes I would make to the list, but that may change with the final reveal of Fate Reforged. Brutal Hordechief is a very likely candidate for making the list (although we will need to figure out how to make that off-color activation work), as well as [card]Mardu Strike Leader[/card]. It is worth noting that all of them are warriors (including the token generated by Strike Leader), so Chief of the Edge may be worthwhile on his own. Also, judges, correct me if I’m wrong, but you can use Brutal Hordechief’s ability to force their entire team to all block one creature of yours, as long as they are satisfying the blocking requirement. That’s a pretty impressive diversion if so. Speaking of the Hordechief…

There is something seriously concerning with the rarity situation in Fate Reforged. Many of the apparent tournament staples (like our aforementioned friend Brutal Hordechief) are at mythic, with several legends at rare. This is concerning, given that the understanding when the change in rarity happened was that the tournament staples ([card]Char[/card] was the example cited at the time) would largely remain at rare. I understand that the situation is nuanced, and it seems many cards are at mythic simply because they are very long and boring to read from beginning to end (I assume Robert Jordan is posthumously given a design credit).

It’s confusing, at least in part, since some of the mythics don’t seem out of the realm of possibility of being rare. [card]Warden of the First Tree[/card], which appears to be Casey Affleck’s Invitiational card, is only mythic in the sense that it is eventually very good and also costs G to cast. [card]Monastery Mentor[/card] is likely only mythic because it says “prowess” one too many times—it’s less that the card is too good to be rare (although as printed it basically is), and more that creating tokens with prowess creates an on-board math nightmare that WOTC only wants showing up occasionally in Limited. [card]Temporal Trespass[/card] is mythic partially as a means of prestige: it’s a callback to an extremely powerful card, although the “fixed” text of exiling itself (and also costing a bunch to cast in multiples) keeps it from being oppressive as is.

Next week, we will be addressing card evaluation more fully (with guest stars!), but I just wanted to touch on this subject today since it is pertinent. Now, let’s close this thing out with some quick hits!

Therefore, be excited! See you next week.