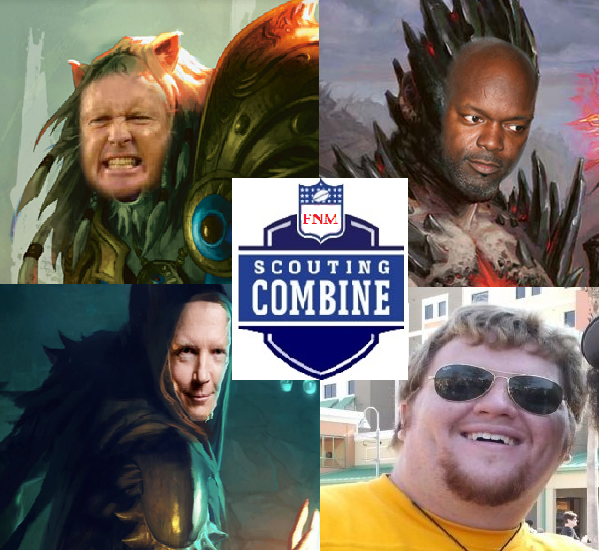 I like a lot of games, but very few are able to truly grab the full focus of my attention (a side-effect of attention deficit disor—*checks Twitter*). Magic, first and foremost, is one of those games: its pull on me is so powerful that it has singlehandedly pulled me away from other games like World of Warcraft. There is another game, however, that is able to enrapture me for weeks on end, and that is professional football.

Many sports get kind of a bum rap in nerd communities, which is unfortunate. Football especially is often considered a “meathead” sport, where a bunch of idiots smack into each other chasing a ball—probably because to many non-fans, much of their exposure is high school football (which is terrible). In actuality, football, especially at its highest level, has a lot in common with strategy games like Magic: you evaluate your team’s strengths and weaknesses, exploiting opponent deficiencies while minimizing your own. Even though many players may play the same position, their individual skills and attributes can be radically different ([card]Siege Rhino[/card] and [card]Polukranos[/card] are both green four-drops, but don’t always belong in the same deck).

Just like when new cards enter the public sphere, new football players undergo intense scrutiny. The athletes leaving college go through a series of interviews and exercises called the “NFL Combine,” and are then drafted (or not!) by NFL teams. Today, we are going to give Fate Reforged cards the NFL Combine treatment, and joining me today are three NFL legends to evaluate this class of rookies:

AJANI GRUDEN: Mr. Gruden is the former head coach of both the Oakland Raiders and Tampa Bay Buccaneers, which is a statement that becomes less and less impressive every year. He is perhaps best known for being one of the current analysts for ESPN’s Monday Night Football, as well as being “Gary Busey level” insane. He is also an anthropomorphic cat planeswalker from Lorwyn or whatever.

PHIL SIMMIC: Many consider the quarterback position to be the most intellectually and athletically challenging of any position in all of sports. That Phil Simms was able to succeed there is a strong argument to the contrary. He is currently breathing loudly with his mouth open on CBS.

EMBERSMITH: Hall-of-Fame running back Emmitt Smith helped the Dallas Cowboys win three Super Bowls during his fifteen-year career. He is also the least articulate human being on planet Earth.

Together, the four of us will review some of the more intriguing cards in the new set, as well as some Twitter requests. May God help us all.

This is probably one of the more difficult cards in the set to grade. If red decks are a problem at your FNMs, then you can probably skip ahead. But if this format slows down, then this could be somewhere between “Card Advantage Engine” and “Takes Over Games By Itself.” Many of the Ux control decks have had trouble playing significant threats, but this lets you just tick out guys at the end of their turn and eventually just get there. There’s also the possibility of building around this in a deck with actual creatures, but it could just as likely be a control mirror trump that lets you sandbag your counters and draw spells. I’m personally still not on the Trail of Mystery/Hooded Hydra/Master of Pearls hype train, but those people are out there and they will return—and in greater numbers.

You know he says crap like this all the time, right? Like, briefly breaking the fourth wall or whatever, but Phil Simms spews useless filler like this all the time. Even on Madden, he’ll be like, “And it’s always better to win the game than to lose it!” like we somehow didn’t know that. I don’t know what’s going on with the Giants, but all of their best QBs seem to have the IQ of a rock.

[card]Sage’s Reverie[/card] is an obvious foil target for Uril, Bruna (or whichever of those angels it is), and a few other decks. I don’t think there are enough auras seeing play right now (bestow aside, which is difficult to predict) to get this to see Constructed use. Financially, this set would have to be ludicrously under-opened for non-foils to have any real value, and even then, they are best in decks that only want one. Even if this gets picked up by Bogles players in Modern, it won’t be enough to drive them outside of foil.

This was one of the first cards we saw from Fate Reforged, and I have been salivating over it ever since. While dragon is definitely getting pushed in terms of flavor and ASFAN (did I spell that right? Is there a hyphen somewhere?), it’s still going to be a top-heavy creature type in terms of converted mana cost. This is mostly going to kill non-dragons, and then your mix of [card]Hero’s Downfall[/card]s, [card]Utter End[/card]s, or [card]Murderous Cut[/card]s will deal with any creatures that you can’t counter after that. It’s worth noting that against a deck like Abzan Aggro, this is just a [card]Wrath of God[/card]. It’s even better if you somehow have a Dragon out! I think the 3/7 hexproof dragon is too slow to be a control finisher, but maybe the UW one could see play? It costs seven, which is where [card]Pearl Lake Ancient[/card] sits on the curve, but it’s easier to kill. More importantly, this card is good. Next!

I was really hard on this guy at first, and I am not too proud to admit I was wrong for the first time in my life. This card is not terrible, he is just misleading (and possibly okay but not great). The obvious comparison here is to [card]Figure of Destiny[/card], a Red Deck Hall of Fame enshrinee who has a very similar mechanical structure. I’ve played with Figure of Destiny, and I can tell you this man is no Figure of Destiny. In actuality, [card]Warden of the First Tree[/card] is more of a 3 or 7 drop, who can sometimes sneak in when you have otherwise unused mana on earlier turns (I played Abzan Aggro for the first time last week, and there were a definitely few turns where I had to pass with a useless G open). His top end is obviously better than Figure of Destiny, but everywhere else along the scale he is about the same or worse. If you are able to activate him more than once, you are probably winning the game, but you may never have to as long as he is played in just the best good stuff decks of the format. Color me cautiously optimistic.

Anyway, this is probably one of the biggest wild cards of the set—delve influences our traditional evaluations of converted mana costs, but it’s very situationally dependent. This guy could seriously cost anywhere from B to 6. The earlier you cast him, the more likely you are to lean on the fact that he’s a 4/5, which is certainly a Tarmogoyf statistic (although since our new friend is legendary, you can’t rely on two of them doing clean-up duty). Later in the game, he becomes a very weird pseudo card-advantage engine: mana-intensive and random, but repeatable and somewhat controllable through delving. This guy certainly has Commander appeal (I’d play him), but it is almost impossible to come up with more than best-case scenarios for him at this point. I expect he will get a lot of practice reps from players to try and evaluate his intangibles, and maybe see some significant playing time his rookie season.

I honestly have to assume that part of the inspiration for this card was putting an Xzibit meme on a white creature. This card almost feels tailor-made for the white-red deck Mike Flores was pumping on Top Level Podcast a few weeks back, where you are just able to pick up incidental value off the life gain, and then eventually have the last ability on SGM allow you to loop your burn spells as a way to end possible stalled board states. I don’t think this card is a major pillar of the format, and I don’t think the last ability will make or break many significant games, but there will always be attractive financial value on him as long as that middle ability remains unique in Magic.

One thing that I haven’t seen mentioned is that this could maybe see sideboards in Modern burn, since they are already splashing white for Boros Charm and Lightning Helix. I don’t know enough about that list or its mirror tech to say for sure, but if it is ever going to be a slam dunk in Modern, it’ll be in the burn deck.

If you’ve learned anything about me by now, you probably know that I have a strong predilection for graveyard synergies. This card is certainly something that is up my alley, and could be another push towards letting [card]Nighthowler[/card] end the second half of his playing career with some sustained success (which I guess makes Nighthowler Larry Fitzgerald). Three cards is not major in terms of fueling these types of decks, but by stapling it on a card that is good at multiple phases in the game (sometimes you just want to make your Elf a 2/2 or a 3/3 early on, or late game you want one big swing), it’s definitely good enough to start as a four-of in my lists. I expect the foils to look insane.

Just me this time. I just wanted to point out that this card shares it’s name with a Dio (well, technically Black Sabbath) album. That is all.

CAUSE YOU CAN’T YOU WON’T AND YOU DON’T STOP.

I really think this guy is awesome. He makes the black aggro decks respectable on his own, and is probably good enough to steal a couple slots in Abzan Aggro. The first ability is great at messing with combat math, as well as giving you the occasional free drain for three or so, and should not be underrated. The last ability is very mana intensive (and possibly just unobtainable for the Black Aggro lists), but it will be a clear game breaker in the Abzan Aggro mirror. By forcing bad blocks, you can choose to wrath their board (or make the most favorable trades) while still getting damage in off the first ability, or you can assign all their blockers to your smallest guy and end the game by everyone else getting through! Either one will be a realistic play depending on the life total and hand size of your opponent, and I seriously expect this guy to do some major work in the format. I wish he was a rare so I could get my four for cheap right away, but he is way too good.

I think this will ultimately be another good-but-not-Great black Commander card, where the foil copies will maintain a premium,while the regular ones sink to near bulk-mythic price. A lot is made of the fact that you probably won’t be able to get the full value out of flipping the manifested cards, but I think that if you look at the card as a graveyard hoser plus army in a can, then the ability to possibly flip some is just upside. Black has few massive token generators ([card]Army of the Damned[/card] and [card]Empty the Pits[/card] come to mind), but they are always swingy and demand an instant answer. If that’s your thing, then this is a good card—just don’t bother trying to make this work in Standard.

I hate you so damn much.

Well everybody, just like Peyton Manning, we are done! Thanks for reading to those of you that actually made it this far, and I will see you next week!