Sarkhan arose, wearily. He edged closer to the edge of the ravine, gazing into it with strain and apprehension. Ugin sprung to life from within the chasm, letting loose a cacophonous din that seemed to rend the very heavens. “What?” Sarkhan becked in reply, his voice coarse. Again, Ugin roared. Sarkhan seemed to this time take his meaning, and his brow furrowed. “Wait a minute. Doc, are you tellin’ me it’s 8:25? Damn, I’m late for school!” 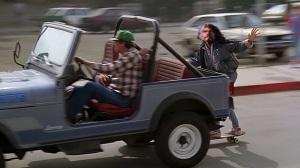 Welcome to another preview card edition of Privileged Perspective! We are going to talk about a couple different things today, but I want to begin with my latest preview card!

BRIEF HOUSEKEEPING NOTE: If you aren’t familiar with my current cold war with the people who hand out preview cards, make sure to check out the FRF edition.

Our last preview card was actually quite a doozy. Although it didn’t appear until recently at a premier level event, [card]Mardu Shadowspear[/card] narrowly missed a top-eight berth at the hands of Tomoharu Saito in Memphis. Being both a human and a warrior is pretty vital right now, especially with some of the new weapons coming out for both black and black/white aggro decks. But hey, that was then and this is now S.E. Hinton, so let’s get on with the show!

And now, without further au juis… 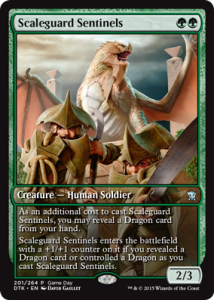 There’s a lot to take in here. On the face, it seems like we have an [card]Elvish Warrior[/card] with upside. Human and soldier are both semi-relevant creature types in this format, although typically not in green decks. Of course, this card does have an upside, and after ruminating on it for a day, it’s actually pretty significant.

A 2/3 for GG is actually near optimal on rate (we’ve gotten a 3/3 for GG before, but that’s not a frequently printed card), but a 3/4 for GG is incredible. That fourth point of toughness allows the Sentinels to dodge [card]Lightning Strike[/card] and [card]Bile Blight[/card], two of the most commonly played removal spells in the early game. It still gets hit by [card]Chained to the Rocks[/card], of course, but if they’re Chaining your Sentinels, then you’re probably in good shape anyways.

Unfortunately, that +1/+1 counter is going to require some work. While our last preview card slid neatly into a previously existing archetype, Scaleguard Sentinels is currently a card without a home. In order to get our ideal value from this guy, we need a deck that can have GG on turn two, with a significantly high enough amount of dragons in the deck to be able to reveal one, and wants to play an attacker on turn two instead of a [card]Sylvan Caryatid[/card].

Realistically, we need to figure out what the best dragons in this format are. [card]Stormbreath Dragon[/card] is probably the odds-on favorite, just because it has an aggressive body and rate, as well as protection from one of the best colors in the format. It’s not impossible to imagine a G/r list that is able to cast efficient beaters early and then curve into a Stormbreath to close things out, but at best, that is four cards out of 60 that trigger our ability—and we need to essentially have it in our opening hand each time! While we don’t have the full set available as of this article, most of the dragons are six to seven mana (yes, there are some fives, but not all of them are green). I’m not entirely sure we want aggressive two-drops in the same deck as our game-ending sevens, or even how many of those sevens are going to be Constructed-viable.

BRIEF DRAGON ASIDE: So when I was discussing this set with my LGS owner and longtime pal Eric, I said that Dragons of Tarkir is basically the Dragon version of Avacyn Restored (which is to say “A large Spring set with a hook that is targetted at casual players and collectors—you cannot have too many sealed boxes of it”). In terms of card design, however, it is much easier to create angels more evenly distributed along the spectrum of converted mana cost than dragons. [card]Restoration Angel[/card], arguably the best constructed angel in Avacyn Restored, cost four. There is currently only one dragon spoiled that costs four, and none that cost less than that. While dragons may be more objectively powerful, you also won’t see any in the two to three range, outside of the occasional [card]Dragon Whelp[/card]-type creature.

So what if we ignore the upside on Scaleguard Sentinels entirely? Well, he’s not going to be beating [card]Fleecemane Lion[/card] or [card]Rakshasa Deathdealer[/card] for a roster spot, and he’s likely worse than [card]Heir of the Wilds[/card]. Scaleguard Sentinels has something that none of those creatures has, however [Editor’s note: IT’S YOUR PREVIEW CARD?!], and that’s a second green mana symbol in its casting cost [Editor’s note: Oh.]. While most of the Green Devotion decks have slowed down by a turn to take advantage of a stronger top end, there was once an aggressive version that took full advantage of [card]Aspect of Hydra[/card] to end games. Scaleguard Sentinels is currently the only GG creature that doesn’t die to [card]Drown in Sorrow[/card] (unless your [card]Avatar of the Resolute[/card] is coming down later than turn two). Maybe this is where we should be looking instead!

*4 Avatar of the Resolute

It’s a rough draft, but I think it has some legs. It has critical redundancy at all of the points on the curve, and a potential game-breaker in Nylea. There may be a list that has more synergistic interactions, or there may just be enough pull from white to be able to support [card]Warden of the First Tree[/card] (which I considered).

Speaking of Warden of the First Tree, you know what deck is really good right now?

Remember when I told you about that Abzan Aggro list that I really liked? I took it to a 5K and ended 7-2, just outside of top eight on breakers. Well, I gave the list to my friend Devin, and he took it all the way to a top 32 finish (28th!) at GP Miami, including a very strong 8-1 day one finish. His loss on day one was to Andrew Boswell in round nine, who was also on Abzan Aggro. You know, the archetype that everyone said was dead? Huh.

This is a deck that is positioned to beat WR and other assorted aggro decks. The [card]Pharika’s Cure[/card] as a fifth Bile Blight (that is to say, a BB removal spell that you must have when Rabblemaster or Mentor comes out) is pretty big, and it is also nice game one against the assorted green ramp lists (although it eventually comes out). Abzan Charm isn’t great against the aggressive decks, but is tremendous against everything else. I haven’t gotten a chance to sit down with Devin and see what his impressions of the deck were, but I have a feeling we will both be playing it at FNM.

Let’s close this bad boy out with some…

I've been gaming MtG finance since artifacts were brown. Longtime magic player and TO. Loving husband and father. Cube > Commander.
Previous Episode:
Conjured Currency #54: Draguncommons!
Next Episode:
Brainstorm Brewery #138 – Everybody Gets One