No time to chit-chat, we’ve got a lot to get to. What are you doing?! Go to the next paragraph, hurry!

I’ve lived through a lot of changes to Organized Play. I saw the fall of the Junior Super Series, the old States, Regionals, Player Rewards (I’ll mention these again later!), and more, but this is the strangest of them all: 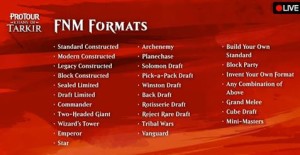 There are several interesting takeaways here.

Now, I know what you’re thinking: “Ross, these stories are really great and entertaining, and I would love to send you money on Patreon, but what about the REAL NEWS? We can play Commander FNMs now!”

That’s true! But I don’t think that this is going to be a major change for the format as a whole. Like any good researcher, allow me to walk you though personal experiences I’ve taken from a small sample size:

There are a handful of guys that show up at my LGS to loiter play Commander on FNM night. They do not play in the Standard tournament. Most of them have what you would consider to be competitive or powerful decks, and they never fail to show up weekly, even though the only thing they are doing is taking up valuable table space and cursing loudly. Your first thought might be, as mine was, along the lines of ,“Now they can play FNM!”

But in reality, they may not want to.

As generous as these new formatting options may seem, they are still sanctioned Magic tournaments. Many players, for one reason or another, use proxied cards in their decks, and these guys are no exception. This is our first snag to getting people to play CMDRFNM: card availability. Card availability is always an annoying argument to make, and it exists to some degree in all formats. In this case, cards may be more than a decade removed from printing, and may not be available for purchase in the store at all. The players who want to participate will power down their lists, while the rest will continue to play unsanctioned, proxy Magic for free. 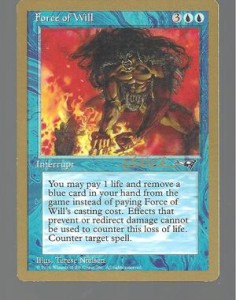 What will happen to those that do play? Well, the local environment will quickly dissolve into Haves and Have Nots. Competitive Commander is in many ways less balanced than Legacy or Vintage, in the sense that the padded life totals and deck restrictions actually favor combo, while pushing out aggressive strategies almost entirely. This means that the winner of the events is going to consistently be the guy who shows up with Five-Color Tutors for Turn-Two Combos, which will get old fast. The idea of a “gentleman’s agreement” in this format goes out the window when you pay $5 to play. It won’t be long until the fish go back to playing free, proxied, unsanctioned Commander, and the sharks go back to Standard, sanctioned Draft, or Wizard’s Tower.

The best weekend of the year is coming up for MTG finance people, and you may not have even been aware of it. I don’t mean some sort of cyclical, Farmer’s Almanac sort of week where prices are at their lowest (I’ll take that secret to my grave!), but it’s a week where anything can happen, and where you can get really good deals on high-profile cards. It’s Legacy GP weekend! If you aren’t sure why these are a big deal, let me walk you through a couple quick points, and then we will dive in deeper from there. 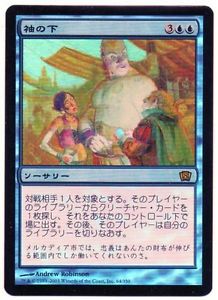 Some of those are self-explanatory, but let’s walk through the important parts. Legacy is a tough format to crack, since it is one of the few formats that is still defined regionally (every store has Khans, but how many have Revised?). The list of decks in the format is staggering, but there are some that you will see more often because they are easier to assemble for newer players. The percentage of those decks appearing scales with player attendance. To put it plainly, the guy with the set of Candelabras is going to show up no matter what, but the majority of people who decide to come either on a whim or with friends is likely going to register some number of [card]Fireblast[/card]s. If Grand Prix New Jersey even comes close to its lofty attendance expectations (I’ve seen numbers that would put GP Vegas to shame), then the amount of people registering these more common decks becomes a serious metagaming consideration.

Let’s use an example of this to discuss the second bullet point. Grand Prix Providence was the Legacy GP in 2011, and the format was starting to see serious growth due to the SCG circuit in the US (Europe has, for various reasons, a much longer pedigree with eternal Magic). One of the better decks in the format at the time was Merfolk, which was (and still somewhat is) very easy to put together by Legacy deck standards. The deck was all over SCG streams, and was considered by many to be a known quantity going into the tournament*. Prior to the start of the main event, Merfolk pieces saw a rise to match the obvious demand, but what really shot up were the expected hate cards. I am not proud to say how much I spent on my two of [card]Llawan, Cephalid Empress[/card], but they were some of the only available copies left in the building. Dealers were paying great percentages on them because they knew they could make a quick flip before the event started, but by Sunday evening they were back to reality. One copy of Merfolk made the top eight of that event, and I played it twice on Saturday.

*If you are playing in a Legacy tournament, knowing that you will play a certain matchup at least once is a considerable advantage, since Sideboard space is limited. Knowing you may play it multiple times over the weekend? Valuable.

Let’s skip past the next bullet, but make sure you read it. Got it? Okay.

In 2014, it’s going to be rare that you go to a GP or equivalent-sized event in the US and don’t see some combination of Star City, Cool Stuff, Card Kingdom, Strike Zone, Troll & Toad, etc. At the very big events (like this one!) though, you’ll see smaller shops come out of the woodwork, and boy, do they want to make a splash. Come Sunday of Legacy GP weekend, though, and they are looking at a lot of cards they don’t want to lug back home. You see, Star City Games (and a very small percentage of their competitors) is large enough that they have the luxury of being able to “sit” on that crimped, miscut, artist-signed [card]Moat[/card] they bought Saturday morning—they know the right buyer will come along eventually, and when he does, they will get whatever they want for it. The vast majority of vendors, however, are going home to a much more predictable market. Maybe they are bringing back some beat up dual lands because they know there are a couple guys who will pay cash for them, but for the most part, they are burdened with a lot of stuff that is going to rot in a display case for a long time. 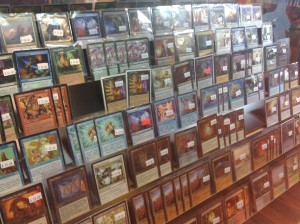 This creates the second great phenomenon of Legacy GP weekend—the buyer’s market. Bring cash, and negotiate prices (within reason. Being a jerk by offering insulting prices is the quickest way to lose out). When negotiating with a vendor, especially on high-dollar items, consider the following:

With all that being said, here’s a little cheat sheet on how to plan your weekend, if you are going to GPNJ and don’t care about actually playing in it:

FRIDAY: Sell into hype with vendors, trade with players (remember, no selling to players!)

SATURDAY: Trade with vendors (how many [card]Steam Vents[/card] for your [card]Time Walk[/card]?) since they have nothing to do during the early rounds anyway. Try to learn what they need, and build a rapport. Identify which ones you will want to check in on tomorrow.

SUNDAY: Starting around lunch time, have cash and make deals.

I hope this all helps! Legacy GP weekend is also a lot of fun, so don’t spend all your time wheeling and dealing.

Come back next time, when I answer all the questions you’ve ever had about Legacy (but were too afraid to ask).