Privileged Perspective 4: The Mana From Another Place

One of my favorite aspects of Magic finance is the one that is very likely the least discussed. People will pore endless hours over set reviews, Modern breakouts, and Reserve List buyouts, but there is, comparatively, nothing written about foreign foils and obscurities. There are several different factors that contribute to this, but in an era where it feels like Magic information is being homogenized and disseminated faster than ever1, it’s strange that the foreign markets have so little to go off of. We’ll touch a little bit on how the foreign foil premium works (spoiler alert: it’s pretty random!), some of the resources that you can use to grow your reach with niche markets, and we will get to look at lots of pictures of cool cards! Let’s rock!

Grasping at Straws; or “Known Knowns and Known Unknowns”

FIRST OF (SURPRISINGLY FEW!) BRIEF ASIDES: Very rarely will a site like SCG have a published price on a foreign foil or rarity. If they do, treat this as one possible price, not the correct one—it may be several months old or predicated on unavailable information (like what their buyer paid for it). Also, they are likely to tack on a “Star City Premium” (and I don’t mean the kind where they charge you money to watch Todd Anderson videos), because most people simply wouldn’t know where else to find these types of cards.

The very first thing I figure out is what language a card is in. This will give us some idea of the scarcity/demand relative to its standard counterpart, the English copy. While almost all languages receive shorter print runs than English2, not all of them experience the same influences when it comes to final price. Here is a handy cheat sheet when it comes to identifying languages:

Once you have determined the language of a card, find out the price on the English equivalent (in the case of a foil, you will want both the foil and non-foil prices). For cards with either of the “modern” frames, the foreign and English prices on non-foils will be roughly the same (I might pad the sale price a little bit for prestige languages). If you are working with foils, then what you are looking for isn’t the price of the English card, but rather the foil premium between English versions. We will use two cards from Ravnica: City of Guilds as an example, with all prices coming from Star City Games.

[card]Blood Funnel[/card] is listed at 99 cents for non-foil and $1.99 for foil. These are, after doing some cursory research, about the lowest prices SCG will list older rares (and foil rares) at. We can establish the minimum foil premium at 100-percent markup, or double the price of the non-foil.

If I was presented with an opportunity to determine the prices on Japanese copies of these two cards (let’s say I’m somewhere without cell reception, like a giant concrete convention building or Mississippi), then I am going to value the [card]Blood Funnel[/card] about on par with the foil English copy (I’d probably settle on $3 in trade, which is pretty good for freakin’ Blood Funnel).

The Loam, however, is going to be trickier. Despite being unable to find any JP foil copies of Loam for sale with a quick Google search, I can tell you its typical sale price is about $180. The foreign premium will not always be the same percentage as the foil premium (thank God), but if there’s a foil premium in excess of the standard3, then the foreign premium for prestige languages will be in excess as well. I wish I could tell you exactly how the Loam got to $180, but it isn’t an exact science. A lot of times, however, it seems the rule of thumb is “double it, then double it again.”

The growth of Magic’s presence on the internet has made getting foreign foils and niche cards much easier over the last couple of years. The expansion of eBay into other countries (with PayPal serving as a financial Tower of Babel in easily converting currencies) and social media have largely replaced the old system of, “Go to a GP and try and trade with the Japanese players.” While that original system of arbitrage is still largely in effect, the majority of my recent acquisitions have been from my phone, typically while pretending to work. Look, let’s just bullet point these so we can get on to the cool pictures of foils and stuff, okay?

Do you ever scroll through Librarities? If you aren’t familiar with it, it’s a website that catalogs all of the rare obscurities of Magic’s past, as well as a comprehensive collection of every promotional card ever printed. It’s MagicLibrarities.net and you should really go check it out after finishing my article and leaving me a comment about how great this was. Don’t worry, the link will still be there. Now, grab a cup of damn fine coffee and settle in, we’re gonna check out some sweet cards!

Were you aware that foils in Tenth Edition didn’t have reminder text? This was before core sets featured new cards, so all the cards that got this treatment were reprints. The most famous is [card]Time Stop[/card], which sells for about $30, twice the price of the original set foil! Many of the cards with this treatment also received flavor text that otherwise didn’t fit. [card]Time Stop[/card] just looks sweet though. 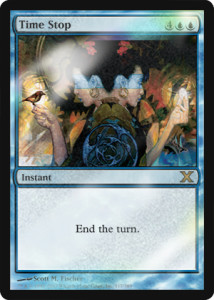 While foils weren’t introduced to Magic until after Urza’s Saga, Wizards spent some time internally developing how they would look, including printing some test versions of cards that already existed. These are rare, and are not even technically supposed to exist. Likewise, right before the card frame overhaul in Eighth Edition, Wizards tried a couple different templates, including some that made it to print. These were never intended to leave the building, but a few made it out alive. We know these are legit because they were featured in an Arcana on the Mothership. Featured below are two scans of actual test prints: a basic Plains with a frame for Eighth Edition that was ultimately scrapped (as well as the Unglued set symbol, and the art for Parallax Tide), and a test foil [card]City of Traitors[/card], with a red text box.

Bear in mind that neither of these were ever expected to be seen by the public eye, so these aren’t mistakes—they are just attempts to see every possible permutation before announcing a change to the public. Obviously, when you get to this level of the game, things like price become much less concrete. I’m posting a couple of links to test prints that are on eBay. The high-end Magic crowd doesn’t play around.

The auction for that Plains I showed you

Giant Growth Test foil, for the best-looking Infect list ever

A Somehow Even Less-Playable Shivan Dragon

One of the more interesting things about Magic obscurities is that they can sometimes become lost, even to the hyper-aware Magic finance crowd. Featured below is the CoroCoro Magazine Shivan Dragon promo that was released in Japan to celebrate the upcoming Seventh Edition. (Note for young people: magazines were like the internet, but strictly worse. But sometimes they came with crap inside!) 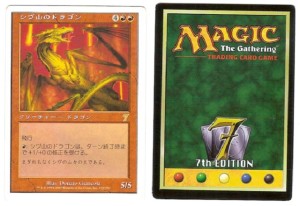 Notice the alternate card back. This card is literally unplayable in sanctioned Magic (sweet gift, thanks!). The great thing about older, unimpressive regional promos like these is that they don’t stay in the public eye. Because people aren’t trolling eBay and such for these niche cards, it makes it possible to pick them up for surprising prices. I snatched one of these of eBay for $10, and was able to flip it for double. SCG actually has quite a few of them in stock, all for between $25 and $30 based on condition, but these were going for about $40 NM a while back. While demand is not very high, it’s still a collectable, and I imagine SCG is just content owning a bunch of them and moving them whenever. I’m still a buyer at $10, but not much higher.

It’s interesting to me that Wizards seems to be moving away from the regional distribution of promotional cards. Every GP gives away a [card]Batterskull[/card], every PTQ gives away a Liliana (I want yours, by the way), but it wasn’t always like that. I’ll lead off with what is likely the most high-profile example of a regional promo: 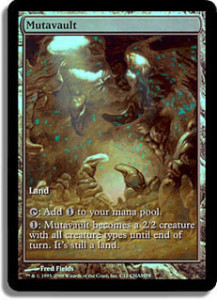 Only 32 of these exist, and they are going for roughly the same price as a beat up Unlimited Mox. If you didn’t make top four of Champs (which was basically States before “States” meant “eight-hour win-a-box tournament”) in England or Ireland, you likely don’t have one. Why these were not the selected promo for all Champs events is beyond me (I got a Doran).

Do you know what the JSS was? It was a tournament series for kids too young to understand the moral severity of cheating in Magic tournaments, but old enough to watch Rounders during FNM to ranch fish for scholarship money. No joke, many people still refer to, “Swamp, Duress” on turn one as the “JSS Opening,” since: #1. Duress was a great card 10 years ago, and #2. You immediately got to see your opponent’s hand to determine if he was playing an actual deck or not. Anyways, WOTC gave out a bunch of promos for JSS events, some of which are really expensive today. The program was later extended to be internationally run, and its somewhat abrupt end4 caused some promos to be under-distributed (or not given away at all). The best such example is the APAC Glorious Anthem, which was never given out, but has slowly leaked into the market through other means (supposedly, a former Wizards employee was given one as a parting gift). The APAC version is only identifiable by the APAC stamping on the foil watermark (I highlighted it for you). 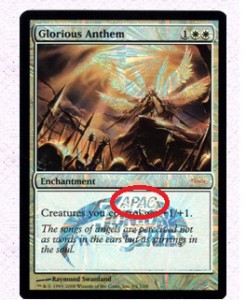 I saw one of these close recently on eBay for about $650, although they’ve been known to go for much more.

The last thing I’ll leave you with is the Hachette or “Pegasus” cards. There was a program in Italy (and/or possibly Spain?) where you could basically register for a “Magic Encyclopedia Program” and they would mail you terrible decks to play with your friends. The cards were all white-bordered, had a unique Pegasus set symbol, and were part of a terrible system that nobody signed up for. Fast forward to our times, and the cards sell as yet another collectible oddity. The most playable card printed for this program was probably Marrow-Gnawer, although there was a Sliver deck with Riptide Replicator. You can find all of the decks (with card images) here.

I will see you again in 25 years. Or next week. Whatever. Actually, I’ll see some of you at GPNJ!

1 Nowhere is this more pronounced than Magic Online, where WOTC is literally restricting the amount of decklists that get published to try and delay format stagnation.

2 The only one I know of that has a larger printing is Chinese. More on this later!

3 Remind me some time to tell you why the foil premium is BS.

4 It was actually “redesigned” as the Magic Scholarship Series in ’07, and the Glorious Anthem was for that, and not the JSS. That said, the redesign only lasted a year, so meh. Everyone just called it the JSS then anyways.

I've been gaming MtG finance since artifacts were brown. Longtime magic player and TO. Loving husband and father. Cube > Commander.
Previous Episode:
Brainstorm Brewery #122 – Moneystorm Draughtbrew
Next Episode:
Welcome to the Jungle: Sideboarding Versus the Aggressive