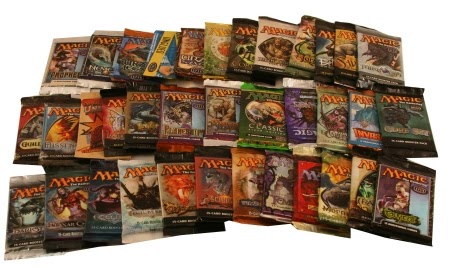 This is the article that was supposed to go up last week, but due to assorted delays, didn’t. Sadly, the biggest loser in this case was the time-sensitive information I had touched on up front—the Walgreen’s booster sale that happens every year on the week after Black Friday. If you aren’t familiar, the premise is simple: booster packs were buy one, get one free (“BOGO” from here on out), with no limit. Walgreen’s doesn’t carry a deep stock of packs, so the “no limit” part can be a bit deceptive, and not every store I went to had Khans packs. The crazy part is that this sale puts the packs individually below wholesale, so if you’re able to buy enough, it can be a great opportunity to stock up.

The downside to going deep on Khans packs right now? That set is about to hit its bottom. That’s right, this is that mythical time of year that newer finance people are always asking about: “When should I buy in?” The best answer is this month, probably in about a week or two, but you won’t lose anything significant moving in now. Khans rares are at their all-time low right now, with the possible exception of the blue fetchlands and possibly [card]Windswept Heath[/card]. Those may dip down a little more after Christmas, but if they don’t, go ahead and move in. I bought all the fetchlands I was missing last week, with the exception of Windswept Heaths, because green-white decks are dumb and I am cool. 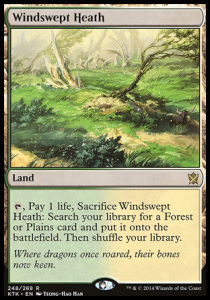 BRIEF EXTENDED ASIDE: These fetches have the rare honor of being known quantities in literally every format on Earth and reprinted1 for the first time in over a decade. They will follow a trajectory similar to the Return to Ravnica shocklands, in that I expect them to maintain a somewhat artificial inflation, at best hovering around $10 for the majority of their life cycle. Most players will realistically aim to get a personal set of all five, and conservative or kiddie pool investors will target them in trade as safe long-term holds. Every aspiring financier will tell you how they went deep on shocklands, and that steady demand really kept their price stable, especially during the run-up to rotation that I expect will kill the Temples. Modern and Legacy beginners will want access to sets, especially as a short-term replacement for the currently much higher Zendikar fetches. Wooded Foothills does a decent enough impersonation of Misty Rainforest that most people would rather save the $40 difference. If you think you’re the type of person who is going to become an overnight hundredaire or thousandaire buying all the fetches, know that they won’t ever take off percentage-wise like the Zen ones did, and that it will likely be two years before you can move them for a worthwhile gain. I’ve already begun outing some of my excess sets of shocklands because I don’t like having that much of my Magic money tied up in dead weight.

Packs are a kind of an interesting topic to discuss. Typically, one of the early signs of becoming a “good” Magic player is when one stops cracking all one’s packs, either in the interest of having lots of available draft sets, or just being able to brag that you are one of those guys who doesn’t open his packs. If you live in a place where drafts fire often, then this has measurable practicality—I drafted up to six nights a week in my college years, and having spare sets made it a lot easier. Sealed packs also maintain their value independent of ownership: as long as they aren’t open, you can pretty easily get $9 or $10 for a draft set anywhere in the world. If you don’t draft or have the exposure to easily sell your packs, though, you may as well open them.

Magic casts a pretty wide net these days, and it is really interesting to see how the swaths of new players treat things that have, to people like me, have become akin to muscle memory. The store I play at gets a lot of these new players, as well as what Mark Rosewater and company would call “casual players.” There has developed, strangely, an almost folk wisdom regarding opening booster packs, cultivated by a jovial store owner who has no problem encouraging people to open “just one more.” Opening packs and boxes is a thing in the sports cards community, primarily because it is one of the only things you can do with sports cards (sick burn), and I feel like some of that mentality has bled into my local Magic environment. Here are just a few things I’ve learned from them:

The last one is my favorite, and I’ll tell you a story why. Friend of the program and former Naya human Joe Herrera had built up a small amount of credit at our old game store, somewhere around 25 to 30 packs worth. He decided to “cash in,” taking packs of Worldwake, the newest set at the time. Anyways, he has just enough credit to take all but one pack from the open box behind the counter. The store owner asks him if he wants to buy it, he declines. The store owner (Roger) asks Joe if he’s sure, since the store is going to open it otherwise. Again, Joe declines, thereby breaking the above cardinal rule. Sure enough, Roger opened the Jace, and Joe’s heart sank. He immediately tried to return the packs. 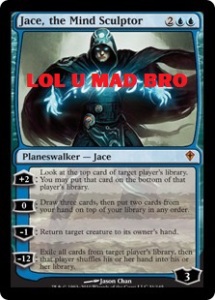 I don’t advocate any of the “flip it or rip it” games, but I do advocate all forms of Pack Wars. There are two primary forms: the MTG finance version and the one where you actually play Magic.

The first type of Pack Wars is the one that you see in the sports cards community. Every participant opens a pack (they should all be the same set), and the player with the highest price rare or mythic wins all of the opened packs. Some people don’t include the foil, but I think you should—it’s painful to open a foil [card]Polluted Delta[/card] and lose it because your [card]Temur Ascendancy[/card] didn’t beat their [card]Mantis Rider[/card]. This is also the form of Pack Wars that you can play with non-Magic players who are also compulsive gamblers.

The second type of Pack Wars is the one most commonly known to Magic players, although there is no codified set of rules. I’m here to fix that, by publishing the well-circulated Florida Rules that have been in place here in the Sunshine State for the last several years. 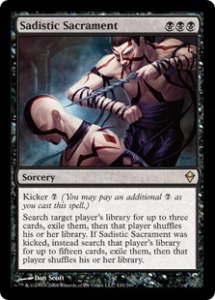 I strongly encourage you to play more Pack Wars, both varieties.

Extended is Still a Thing (Sort Of)

Speaking of packs, I gave away some sweet packs in the Extended tournament I ran last Saturday! If you were following my coverage of the event online, then you know already that while the event was small, it was well-received. We currently have more people wanting to preregister for the next tournament than participated in the last one. I won’t go through round by round coverage, but I will through out some quick hits, as well as my decklist from the event. Then we will close with a couple of quick finance bits.

Here’s what I played:

*3 Liliana of the Veil

The only thing I would change is I would cut the Strikers from the sideboard (they never came in). This deck felt so consistent and aggressive that I plan on trying out a modified version of it in my next Modern tournament. [card]Falkenrath Aristocrat[/card] and [card]Bloodsoaked Champion[/card] happened enough that I’m fine letting [card]Rakdos Cackler[/card] hit free agency. In Modern, the Deathrite Shamans will become [card]Obstinate Baloth[/card]s. Liliana was unreal good and might belong in the main deck, although there aren’t any ways to truly abuse her,

Next week will be that big article I was supposed to run a couple weeks back, I promise. Unless it isn’t. But it should be! I think.

1No, Judge Foils, you don’t count.

2 comments on Privileged Perspective 8b: Packs