Hello, everyone, and welcome back to The Puzzle Box!

This week, we are going to be continuing our in-depth look at the Twos four-man format. We’ll be replacing some  of the black cards in the current Puzzle Box list with cards that are better suited to the aggressive nature of this variant. 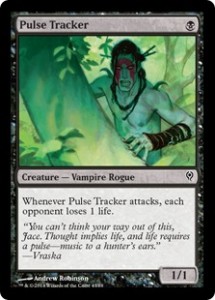 If you have never heard of this format, you’re in the majority! It is a little-known style of cubing that seems to have originated in Toronto, Canada, and made its way to Winnipeg via Rich, one of the owners of Fusion Games. It was the de facto Cube format in Winnipeg for five or six years before people got hip to classic six-person team drafts and full eight-person Swiss. This basically meant that the format was explored in a way that was free from the influence of the cards that are good in 1v1 like [card]Wall of Omens[/card] and the like. It got to develop as its own thing for a long time. You can read about why this format is so awesome in my primer post here.

There are lots of swaps to be made in black, and even a windmill slam auto-include from the newest set, Conspiracy, that is super exciting!! Let’s gitt’r done!

[card]Tormented Hero[/card] -> [card]Carrion Feeder[/card] – Carrion Feeder is a creature that should be in the main Puzzle Box list to begin with, but as of right now, it is not. We are swapping out a two-power one-drop for a one-power one-drop here because [card]Carrion Feeder[/card] has a much better upside. It makes your opponents blocks and removal spells worse because it can just eat up whatever is dying and become a huge threat. Not super Twos-specific, but a good swap none the less. 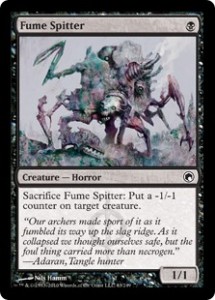 [card]Nezumi Graverobber[/card] -> [card]Fume Spitter[/card] – [card]Fume Spitter[/card] is an incredible threat in this format. As you may be noticing, the cost, and therefore size, of the creatures in a Twos cube is greatly reduced, so the number of x/1’s is going way up. Nezumi Graverobber is just too slow. Though it can sometimes attack for four on turn two, that is basically Magical Christmas Land. It’s most often a 2/1 for two that doesn’t do much else.

[card]Bloodgift Demon[/card] -> [card]Pulse Tracker[/card] – [card]Pulse Tracker[/card] has been referred to as the black [card]Wild Nacatl[/card] in Twos. Every time it swings, it dings each opponent for one, and since you have two opponents, it hits them for two without even connecting! Like with our other cuts, [card]Bloodgift Demon[/card] is too expensive.

[card]Oona’s Prowler[/card] -> [card]Wight of Precinct Six[/card] – [card]Oona’s Prowler[/card] is a great card, but it just doesn’t have the upside that Wight has. Wight is a good turn-two play because there is a good chance that it will be at least a 2/2 with two opponents feeding it. And if the game goes long, you could very well have a 10/10 for two mana… Tarmo-who? 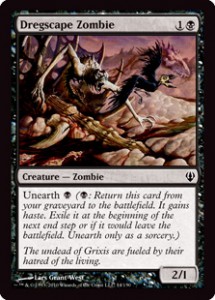 [card]Vampire Hexmage[/card] -> [card]Dregscape Zombie[/card] – [card]Dregscape Zombie[/card] is a two-mana 2/1 that can act as pseudo-burn later in the game. Seeing that blocking is not a big part of Twos strategy (because normally at least one of your opponents will not have a blocker), you can kind of see this card as a 2/1 for two mana that has a flashback [card]Shock[/card] stapled to it. It’ll be there to get those last points of damage in when you are top-decking. 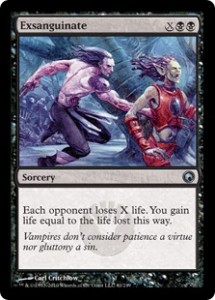 It’s clear that black is truly rich in resources when it comes to really great Twos cards. Seeing that there are around thirteen-thousand unique cards in Magic, it is possible that some gems have yet to be mined. If you are interested in this format, take some time to scour Gatherer and see what you can come up with. If you find anything that you think would be good, you can hit me up on Twitter at @awcolman any time!

Thanks for hangin’, everyone. Play this format; it is super sweet!