Last week the Scandinavian Open series came to Malmö, Sweden. I was there, ready to rock some Legacy! Unfortunately I didn’t do as well as I’d hoped, ending with an unimpressive 3-3 record. Still, I got to meet some cool people, play lots of Legacy and watch my best friend doing alters on site (If you haven’t seen it yet, you can find her work here). All in all it was a good weekend. 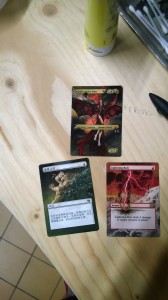 I arrived to the site Saturday morning after an eight hour long train ride. I spent the day hanging around the site, talking to some acquaintances, and watching my friend Jesper make the top 8 of the sealed event. Day one finished and my best friend and I, as well as some fellow judges that had been judging during during the event, had dinner at a Japanese restaurant in central Malmö. We found a place to crash in one friendly judge’s apartment, and having spent the night before sitting on a train for eight hours, we were very grateful! Sunday morning we returned to the site, and I spent the first round scouting as I had a bye from doing well in earlier events. This is the list I played.

G1 I already knew what my opponent was as I had watched him playing in the first round. Knowing what I was up against I played a turn one Chalice of the Void for zero on the play and my opponent didn’t play much magic this game.

G2 was super interesting. My opponent played a Signal Pest and a Frogmite, followed by a Myr Enforcer a turn later. The Frogmite was met with a Tarfire as an Aether Vial was ticking up. Master of Etherium and Etched Champion joined the fun shortly thereafter. Goblin Matron found a Mogg War Marshal before moving onto chump blocking duty. A Tuktuk Scrapper found its way onto the battlefield via the Aether Vial, taking care of Master of Etherium before teaming up with Mogg War Marshal to trade with the enforcer. At this point I was at three life, facing down an Etched Champion and a Signal Pest. I had five lands and a vial on three. Fortunately my Goblin Ringleader found a Tarfire to deal with the Signal Pest, leaving me at one life after taking a hit from the Etched Champion. On my turn I played a second ringleader, finding me another matron. Goblin Matron into Warren Weirding was enough to stabilize, and I won the game from there.

Having managed to beat a difficult matchup I was feeling pretty good about myself going into the feature match, albeit still shaken from an incredibly close game. I sat down and greeted my opponent, but couldn’t quite remember what deck he was on (I knew it was either Merfolk or Storm).

G1 My hand was unimpressive, but had multiple Chalice of the Void, so I kept, thinking that if he was on Storm I would be in good shape. He wasn’t and ran me over as I didn’t draw what I needed to get me out of the situation.

G2 I mulliganed a hand with two Gempalm Incinerator but no turn one or two play. I kept a six consisting of Goblin Lackey and five lands, as they can’t interact with it too well. I was hoping to draw gas and steal the game. I didn’t, and I’m thinking it might have been wiser to go to five here.

This was an off camera feature match and while I was paired with both a friend and a poor matchup I was in a good mood. Not much to say about this match.

G1 I tried to get a Goblin Sharpshooter online, but it was in vain as I was too late and found myself facing down the combo of Food Chain + Misthollow Griffin.

This matchup can feel like a cakewalk at times, when they don’t really do much and you simply run them over. This wasn’t one of those times and both G1 and G3 had my opponent resolving multiple game winning threats that I couldn’t deal with.

This is normally a positive albeit skill intensive matchup for me, and I was really impressed with rabblemaster here.

G2 was particularly interesting as my opponent played a Humility on fifteen life. I however had a Chalice of the Void on one, so he had difficulties dealing with my army of 1/1s. A Terminus, Entreat the Angels, Vendilion Clique and Containment Priest did their best to stop the assault while a Jace, the Mind Sculptor began fate sealing. Apparently however 1/1s for three and four mana are good enough for the job sometimes and I killed my opponent with one card in hand against a Jace that was ready to ultimate otherwise.

I wasn’t feeling too great about my record, but I had managed to defeat the one deck I had expected to face, even through a powerful hate card. Goblin Rabblemaster had impressed me, and I felt confident in my decision to cut down on the silver bullets in order to improve the quality of my average draw. Three Relic of Progenitus is likely too much though, and I’ll be going down to two.

My friend Jesper made top 8 once again, but lost in the semifinals to an Omnitell player, which meant the finals would be an Omnitell mirror. The winner of the event, Kjartan Uldahl, was on an innovative Blue Black build that had foregone Cunning Wish completely in favor of Intution and the third Emrakul. Here is the list that took down the Scandinavian Legacy Open in Malmö. 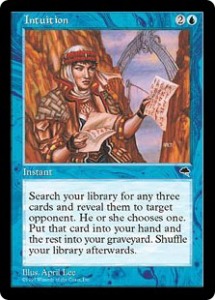 1 Boseiju, Who Shelters All

1 Boseiju, Who Shelters All

Kjartan was a friendly and competent player. I asked him about the deck and the reasoning behind some of card choices, and he was happy to answer.

S – What would you say are the main advantages/disadvantages of your build compared to the stock Omnitell lists?

K – You get a better combo/mirror matchup. There’s not a lot of EtB triggers being played against Omnitell at the moment, so Cunning Wish is not at its best right now.When you DO face it, you’ll have an answer, just not a perfect one. You also get to play 15 cards in your sideboard instead of 5, which gives you more options and flexibility.

S – I notice you don’t play Cunning Wish, what is the reasoning behind this?

K – Cunning Wish is the card with the highest variance in regular Omnitell. When you’re sculpting in the early game it’s basically a brick that can’t find any of your combo pieces. Dig Through Time and Intuition do double duty and can represent any piece you need both before and after Show and Tell has resolved. When Omniscience hits the board Cunning Wish is suddenly the BEST card in the deck, but overall it’s just too inconsistent.

S – How do you feel about Thoughtseize? When is it good, and why should you play them main/side?

K – Thoughtseize is always good. You don’t see a lot of hate game one, so it’s better to just execute your own plan and protect it with counter magic in case they have anything to disrupt you. Spending time and slowing yourself down disrupting their hand can actually cost you the game. After sideboard it gets a lot better as they bring in more targeted hate cards. The maindeck one-of is there as a miser’s out to cards we can’t deal with because we don’t have Cunning Wish.

S – You seem confident in Intuition in this deck, would you explain what role it usually plays?

S – Your version seems better suited at playing the control game, is this assessment correct?

K – There’s a lot of matchups where you DO turn into a control deck after board, mainly Reanimator and Storm. The Intuitions however are often boarded out, simply because Dig Through Time is that good on its own. The only thing you need to win the Delver matchups is time, and Disfigure buys you a lot more time than any conditional counterspells or discard would.

Omnitell is one of the strongest decks in Legacy right now, and I believe Kjartan is on to something with his build. Lately I have seen many respected players moving towards Intuition. Playing more than one however has not been feasible due to its high mana cost. Removing Cunning Wish solves this problem and gives you more room to adapt during sideboarding. The single Thoughtseize maindeck does look a bit odd in my eyes, and I wouldn’t be surprised if I were to find that an additional Flusterstorm or Intuition was a better use for that slot. On the other hand Kjartan obviously knows what he’s doing, and I wouldn’t mess with his list until I’ve tried it for myself. I really like the two copies of Disfigure in the sideboard, and the idea of using Thoughtseize to make sure the coast is clear to go off in the mirror is very appealing to me.

As for Goblins, I didn’t do too well this time. Legacy is a diverse format, and I wasn’t prepared for some of the decks I was paired against. Moving forward I would cut one copy of Relic of Progenitus, although I’m not sure what’s going to replace it. Both Blood Moon and Magus of the Moon have the potential to singlehandedly win games in certain matchups, but also seem like the type of card that is much better in theory than in practice. With no way to search for it, a card that doesn’t win the game when you’re behind and which can be dealt with by your opponent floating mana and then casting Abrupt Decay isn’t necessarily what I want. That being said, if Four-Color Delver is represented at GP Lille, this seems like just the card to wreck them with.

I will be staying in Lille this weekend. If everything goes according to plan I will have found a configuration that I’m satisfied with, and you will get to see me doing battle on camera. If not, I will be playing the game I love and spending time with many awesome people, enjoying a nice trip. Whatever the result I’ll be back next week with a report on how it went, although it is my ambition that by that time it will already be known.

One comment on “SCV Legacy Open – A Tournament Report”