This has been a fun week for home brewing in the Colman house. I got to do some bottling of beer that has been in the fermenter for well over three months. It doesn’t take too long to bottle beer, but you need a friend to do it with you. Luckily, I got my friend Bryan to come over and give me a hand. We cracked one of my special beers for the evening’s drink: a barrel-aged Avery stout with 16.53 percent alcohol. Wow, it was an exquisite beer! I lucked out on my last trip to Denver by talking to the “beer guy” at the store I was at. After we talked for around 15 minutes he went to the back room and grabbed a few of the beers that they kept stowed away—these were the special ones, saved for the right people.

Why am I telling you all of this? Because, these “beer guys” and “back rooms” are not all that uncommon. If you start really getting to know your beers and start understanding how everything is created, you’ll be able to engage in some real conversations with other beer nerds. If it so happens that one of these beer nerds works at a beer store, you might just get your hands on something really special. So I would like to encourage you to have some conversations at your craft beer store. You’ll find the people who work there will be more than happy to talk for hours about beer if they can get away with it.  You’re guaranteed to meet some awesome people and might make some new friends.

Now for today’s topic. We have arrived a the grand daddy of all home brewing techniques.

If you read the last installment of Serum Visions, you learned about most of the processes that go into turning malts into the sugars you need to make beer. The difference between a partial mash and all-grain is a fairly simple one. Instead of using malt extract to make up the bulk of your fermentable sugars, you are using  around 10 pounds of base malt, depending on what kind of beer you are making.

That seemingly small difference makes a huge difference in process. When you do a partial mash, you are usually only mashing a few pounds of grain to give the alcohol a little boost or adjust the fermentation characteristics of your beer. So if you were doing three pounds of grain, you would need to heat about a gallon of water. This you can do on the stove top in about 10 minutes, depending on its power. If you were to make an IPA at around 6.5%, you’ll be using around 12 pounds of base malt and at least a couple pounds of specialty malt to give it some character. This brings your total grain weight up to around 14 pounds, and now you are talking about 4.6 gallons of water to bring up to a boil. If you think about the water cooler at work, that holds 5 gallons. Imagine trying to bring that up to a boil on your stove top.  But not only that, you need to run some extra water or sparge water over your grains to make up the rest of the boil volume. If you are doing an hour boil, you need to account for the amount of evaporation that is going to happen during that time. This varies greatly for each person’s setup, but it is not uncommon to need 8.5 gallons of water for an hour-long boil. As you can imagine, needing to boil 8.5 gallons of water for an hour will require a massive pot and a lot of heating power.

Just for fun, we are going to look at a few different all-grain brew setups to see how impressive they can be. 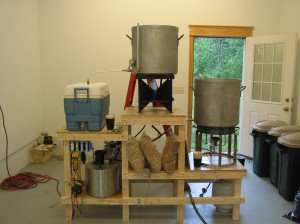 This first one is a fairly simple setup. You can see by the general lack of electronics that it is all gravity fed. On the top tier you will see the hot liquor tank (HLT). This is simply the vessel that holds the water while you get it up to its strike temperature. If you look closely, you’ll be able to see the flame coming up from underneath the HLT and the thermometer on the side of the pot. Once the thermometer gets to its strike temperature, probably around 174 degrees, the brewer releases the hot water into the cooler set up on the second tier down. The cooler will hold the grist (milled grains) and the hot liquor for an hour for the mash. After the mash is complete, the brewer will release the ball valve on the bottom of the cooler to release the wert into the boil kettle. The boil kettle is the on the third tier down. If you look on the floor underneath the boil kettle, you’ll see a propane tank that will fuel the hour boil. 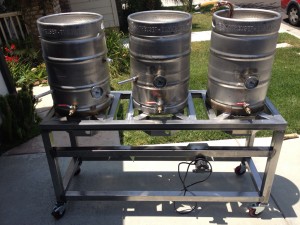 This setup is one of the more common ones for an all-grain brewer. It is made of three full-sized kegs on a welded steel structure. The liquid is moved from the HLT to the mash tun to the boil kettle using a series of pumps (rather than using gravity). You can see that there is a burner situated under each of the kegs. In this picture, we do not see the propane tank, but this method too is propane powered. If you look at the top of the right keg, or the boil kettle, you’ll see two copper tubes sticking out the top. This is the wort chiller. This is made up of soft copper tubing that has been coiled to fit the size of one’s boil kettle. The input end of the wert chiller hooks up to a cold water source and the output end runs down a drain or into another storage vessel. After the boil has finished, you turn on the cold water and it runs into the input end and out the output end. It comes out at around the same temperature of the wert so you know when it is cool enough to move to your fermentation vessel. 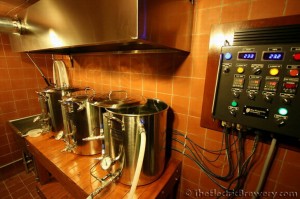 This next one is “the cat’s ass”—it got that name from a beer judge—it is an TheElectricBrewery.com set up. There is no propane burning in this set up. Everything is electric, and there is an element inside of each of the pots. Those elements are controlled by that fancy-schmancy panel over there on the wall. All of the temperatures are set into the panel. There is a PID controller (proportional-integral-derivative) in each of the pots, which provides the panel with constant readings so that it can adjust the power going to the element to keep the water at precisely the right temperature. These setups can be hooked up to your computer so you can monitor the progress of your brew from another room, or record it for analysis at a later date. They can even be put on a timer, so if you want your brew day to end early in the afternoon, but don’t want to get up that early in the morning to get the HTL heating, it will wake up and turn itself on for you. You can see that this is probably in someone’s basement, so he or she has a full ventilation system to catch the steam and send it out into the world.

And We Got There

This, however, is not as cool as it gets. It is, I might guess, as efficient, convenient, and expensive as it gets, but it is not as cool as it gets. At brewingasart.wordpress.com, we find the coolest of the cool. Real live steampunk. I don’t think we should let the clever pun escape us—there is a lot of steam created in the process of brewing. I wont prattle on about how this one works. It makes beer, and it does so elegantly, stylishly, and commandingly. Go to the website and look at the photo gallery to see it in all of its steampunky glory! 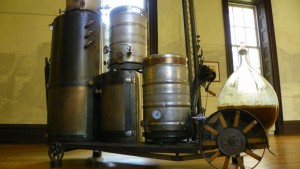 It seems that I have been slacking in my assignments of style of the week, so I’ll pick the practice up here. This week’s style will be 19c, the American barley wine. Why? Because it will have the most amount of grains for our all-grain article. It is going to be strong, malty, and noticeably bitter, starting at around 8% and going up to 12%, according to the BJCP style guide. This is the highest percentage alcohol beer—due to the amount of grains—other than the eisbeer, which we already covered in a previous article. You can find the full tasting notes here. The commercial examples you’re most likely to find are Sierra Nevada Bigfoot and Anchor Old Foghorn. Make sure to look for a local version first, of course.

There is much more to know about all-grain brewing, so if you are interested, pick up Charlie Papzian’s book, The Complete Joy of Home Brewing, to get all of the real details.

And as always, thank for hangin’.