Hello and welcome back to Serum Visions, everyone!

This week we shall be looking into a specific style of beer: stout. I plan on making one in the very near future and so I have been reading up on the process, which is a great opportunity to share some of my learnings with you here.

Home-Brewers are the Best

I was recently talking to a home-brewer  friend of mine and we were chatting about hops. I mentioned that I needed to go to the local home brew shop (LHBS) to pick some up for my next beer. He let me know that he had close to a pound of hops in his freezer that were getting close to their expiration date. He had no free carboys in which to brew, let alone to brew a pound of hops worth of beer (for context, an average IPA will have four to six ounces of hops per five gallons. So a pound of hops will make about fifteen gallons of IPA). He asked me if I minded buying them considering I had plans on using them right away. “Sell ‘em to ya cheap!” That was a no brainer, so off I went to David’s place where I got just under a pound of hops for $15. If you’ve been reading this series, you’ll know that is dirt cheap! Anyway, for whatever reason, David also had an extra 44 pounds of Six Row malted barley on hand, so I left with eleven pounds of grain as well. I have to say, I am grateful for such generosity! As a passing comment, my friend said it was a good base malt to make a stout, and that was it. I’ve decided to make a stout.

Up until then, the only stout I have made was a Belgian chocolate stout. This is not a typical version of the style, so I figured I needed to learn about it before I dared try a classic version of it.

Luckily for me, a guy named Ray Daniels has written a fairly comprehensive book on many styles of beer called Designing Great Beers: The Ultimate Guide to Brewing Classic Beer Styles. Ray offers good science and charts on how to land a beer within it prescribed parameters according to competition style guides, but he has done so much more than that: he has provided the rich histories of the styles he highlights in the book. This way, if you are trying to brew a beer that is true to its origins, you’ll be able to start from its roots, understand its purpose, and innovate within tradition (if you so choose_.

So What About Stout? 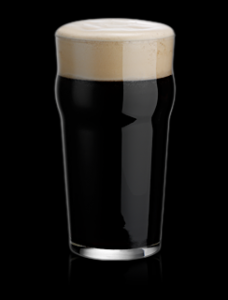 “An almost mystical character surrounds the stout for some reason. Perhaps it is the blinding blackness of the brew as it sits in the glass—a sort of barroom black hole so intense that it might absorb everything around it. Of course, the flavor is just as striking. Those who finish their first glass often become converts, swearing allegiance and setting off the sybaritic search for the perfect pint.”

This is the opening paragraph from the stout chapter in Daniels’s book. As is custom when quoting at such length, I must offer a false apology and insist that no words more beautiful could be offered about the beer, so I might as well use them as they are.

The stout started off its life as a porter. It was not considered its own style until 1820. At this time, we see a beer being commercially described as a stout as opposed to a porter. Up until this point, stout was being used as an adjective, meaning stronger in alcohol content. In the beginning, a porter was a beer designed to “slake the thirsts” of the laborers of the industrial revolution of England in the early 1700’s. A pub-goer would ask his bartender for a stout porter if he were looking for the the stronger version of a dark ale. The color of the beer would not have been the black hole black that we are familiar with today. Rather, it would have been a dark brown beer, because the invention of black patent malt did not come until 1817. The stout was one of the most highly-hopped styles available. This was a compliment to the bitterness offered by the blackened malts and the very dry finish. There can even be an ashy note to the beer because of the amount of the black malt that has been added.

When tasting modern classic stouts, you’ll often find a coffee or dark chocolate aroma. The flavor notes, taken from the BJCP,  are moderately roasted and a grainy sharpness. There could be an acidic sourness and, as mentioned before, there should be lots of hops. The finish will probably have some sort of chocolate flavor, either bittersweet or unsweetened.

The Importance of Guinness to the Style

Stout had evolved for around 70 years before Arthur Guinness decided to stop production of all beer at the famous St. James Gate brewery in Dublin other than porter. Around 1820, the once-labeled “Guinness Extra Stout Porter” had the porter dropped from its name and got the name by which we know it today: Guinness Extra Stout. The style grew and thrived because Guinness was a brewery that was focused on innovation and progress. One of the key innovations that the company adopted before any other brewery was the practice of sparging. This is when a brewer runs a second round of hot water over the mashed grains which have already been drained of the first runnings of wort. You can think of it as rinsing: you never get something completely clean without rinsing, and this includes rinsing sugars off of mashed grains. This means they could make more beer/product to sell without using more ingredients! In the end, this practice produced 20% more beer than they had been producing before.

You may realize that things have changed since Guinness first started brewing its porters and stouts. As I’ve said, a person would walk into a bar and ask for a stout version of a porter, expecting a porter with a stronger alcohol content. However, if you go and buy a Guinness in North America today, you’ll end up with a beer with lower alcohol content that Budweiser (4.2%). Apparently, the Guinness is much different in Ireland than it is here. If you have had it it its native land, leave a comment or hit me up on Twitter, @awcolman, and let me know! I’ll be there this summe,r so I’ll let you all know first-hand when I get there.

I’d like to close by talking about some stouts that are not Guinness. There are sweet stouts: these often have either oatmeal added to the grain bill, which would make an oatmeal stout (surprise, surprise!). Another kind has lactose, or milk milk sugar, added to the beer later on in the process, which results in a milk stout—more surprises! Daniels refers to this style of beer as “the perfect beer to drizzle over vanilla ice cream.” Another very popular version of stout is the Imperial or Russian Imperial. This is basically a stout that has been ramped up to 8 to 10% alcohol. These are great beers to buy and age for a couple years. It lets the flavor develop like a fine wine. By far, one of the most interesting of all beers in general is the Oyster Stout. This is a beer that can have actual oyster meat added to the boil. There is little written on the subject, but I’ll take a shot at how this style may have come about. Someone, at some point, figured out somehow, that shell of an oyster could be used as a fining or clearing agent. They noticed that it imparted a strangely enjoyable flavour to the beer, so the next time they were brewing, and had had a few too many, decided to throw the whole oyster into the boil and found out that it tasted great. This is pure speculation, but it seems plausible…

Take a guess! Full BJCP tasting notes are here. As always, try to find a local offering before defaulting to Guinness. This time, however, I would say to get the local version and a Guinness and taste them side by side (do a blind tasting if you can) and see which one you like more. Maybe the guys who have been doing it for over 250 years are doing it right!

Leave me a comment. I’m sure we have all had a Guinness at some point in our lives. So let’s get talking about it!