I am writing a finance article this week! After a couple of months of process articles that weren’t particularly inspired by MTG, I think it’s time to take it back a little. With our favorite green creature reaching a very upsetting $200, and [card]Misty Rainforest[/card]s and [card]Scalding Tarn[/card]s both fetching $100 on SCG, it seems like a good time to talk about the supply and demand of our favorite green flower and it’s journey into scarcity and luxury.

When I first started home brewing with some regularity, I was making trips to the local home brew shop (LHBS) almost weekly. As I have said before, I had multiple five-gallon carboys fermenting, one three-gallon carboy, and any number of one-gallon batches of beer going all at once. I was determined to try as many different hops as I could, and I apparently had little patience with that project. One beer that caught my attention was a Chzech Pilsner. I had just figured out that I could do a lager in the window space of my bedroom because it was winter. So, I found a recipe and trotted off to the LHBS to get my ingredients and my saaz hops. When I got there, I was dumbfounded to find that they had none at all. I was so confused—this was the noblest of noble hops and they didn’t have any! I called every week to see if the had come in, when the eventually had them in stock, they cost $4.50 an ounce! To put that in perspective, I could buy cascades now for $4.00 per two ounces. Right now, saaz costs only $5.50 for two ounces. I was joining the home brewing community late in one of the darker ages of craft beer and I had no idea. What in the world was going on?

In 2008, there was a hop shortage. There were not enough hops to go around. It was a similar situation to what we’re seeing now with ‘Goyf: an erroneously-printed card, tiny initial print run, Modern Masters creating demand for three more per one opened, the long run up to Modern PTQ season to allow for this inflation in such a visible and tangible fashion, and an explosion in player base. And a very similar thing happened with hops from the early 90s up to 2008. 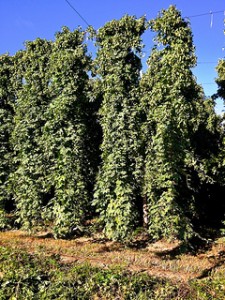 Starting in the early 90s, there was an incredible bumper crop of hops around the world. We reached an all-time high of hop acreage, coming close to 240,000 acres. At this time, the craft beer boom was only in its infancy, so the ever-growing demand for hops was only starting. Thus there was a surplus of hops on the market. Luckily, these hops were not wasted, as hops are easily turned into hop extract that can be stored for use at a later date. There was, however, such a surplus of hops at the time that the profitability of growing them was diminishing. Farmers did the intelligent thing and used their land to grow more profitable crops. After a long descent, the world hop acreage diminished to around 114,000 acres by 2006.

In 2007, Mother Nature got a little pissed off with the world and had her wrath. Here in Winnipeg, we had the flood of the century. The waters climbed to the highest they had been in over 100 years and forced thousands from their homes. Across the world in Czechoslovakia and Slovenia, the climate as well as an ice storm that hit just before the harvest season for hops, had the cumulative effect of bringing the countries’ harvests down by 30%. Along with only mediocre harvests from Germany and England, and the fact that the hop extract surplus had all but dried up, it was about time for a [card]Snapcaster Mage[/card]-style market correction.

This is where my analogy breaks down a little bit. Hops are only good for one-time use. 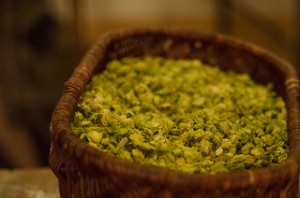 You can use a [card]Misty Rainforest[/card] 1,000,000 times, and so long as it has been sleeved, it will still have some life left in it. Cards are regularly being bought and sold as people get in and out of the game, but the supply never really runs out. Hops, on the other hand, are a little bit different. Hops are purchased on contract. This means that a brewery will purchase its hops at least one year in advance of them being produced. What this means to the LHBS and the really small microbreweries is that, if all the of the hops that were harvested have already been paid for, there are simply no hops available to buy. This is why when I wanted to make my own pilsner there was no saaz. It’s not like saaz were marked up to 20$ an ounce—no, there wasn’t any to purchase. No companies were coming in to sell their hops for a healthy profit, although I’m sure this happens at a higher level. The shop owner had to send email after email and make call after call to find someone who had a small stash of them that they were willing to let go of at whatever price. Many breweries had to formulate new beers depending on what hops they were able to get their hands on. It would not surprise me if I found out that some of the smaller breweries had to stop production altogether because they just couldn’t buy them.

Things turned around after the next harvest. Recovery was not immediate, but the market has a way a sorting itself out. Hop prices were high so there was lots of money to be made. Where there is lots of money to be made, there will be lots of people lining up to take advantage. There was at least one hop garden that opened up near Winnipeg due to the shortage. They now supply our microbrewery and our LHBS. Homebrewers can go out to the garden at the beginning of the season and buy pieces of the roots, called rhizomes, to grow their own hops. Adversity breeds opportunity, and so it has!

I would love to tell you that all is well now, five years later. But there is another phenomenon 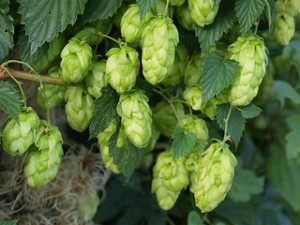 that is impacting the price of hops in a commandingly cryptic fashion. It’s a far happier problem though: the problem is that micro-breweries are opening at a rate of 1.6 per day across America. That is a lot of hops!

Alas, this is a story for another time.

The style of the week will obviously be double IPA!

This is the style that uses the most amount of hops possible. I recently listened to a podcast where the guest was responding to a question oft asked: “When should you add hops to your beer?” His reply? “Yes.”  Double IPAs will often boast well over 100 IBUs, even though the maximum solubility rate into beer is only about 104. But that’s okay—the more the better! I don’t need to say much other than it’s strong and hoppy! A well-balanced double IPA will not claw your face off with bitterness, but one with a more aggressive intent will indeed claw your face off with hops. Glorious! Here are the full tasting notes from the BJCP. Make sure to try and find a local version first. If you can’t, the most common styles you’ll find will be Dogfish Head 90-minute IPA, Rogue I2PA, Stone Ruination IPA, and Three Floyd’s Dreadnaught.