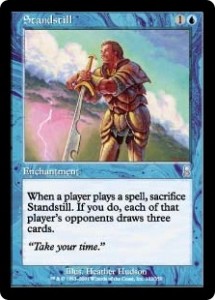 This week we are going to be continuing our exploration of the four-man cube format called Twos. If you are just tuning into this little mini-series, you can go back and find what this format is about and if it is right for you play group here.

The section we are going to be looking at this week is blue, and it come with a little bit of a caveat: This list is untested when it comes to playing Twos. It is also considerably different from the tuned list that is Pidgeot’s on Cube Tutor. Aside from his list being powered, there is one very significant difference: his colors are not evenly balanced. This is not to say that is bad, it is just different. There are some distinct advantages to having an unbalanced cube, especially in this format. One of my first times playing Twos, while building my deck, I was given a piece of advice. 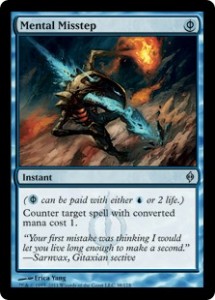 That is to say, you generally want at least one blue player on your team or you’re going to have some trouble. The problem then becomes: what if there aren’t enough blue cards in the draft pool to support two control decks? This is where the beauty of having an unbalanced cube comes in. If you just have more blue cards than the rest of the cards, then you’ll be able to support multiple blue decks. This concept, however, comes with built-in criticism. Namely, why do there have to be two blue control decks? But keep in mind that you can build the format however you want. If you want it to be a more white-control-focused format, you can double up on white cards and make that your main support color. Or you can have evenly distributed colors and let the cards come as they will. All of this is pretty pedantic and just goes to show you that your cube is yours and you can build it exactly how you and your play group likes it!

On to the Swaps

[card]Arcane Denial[/card] —> [card]Erayo, Soratami Ascendant[/card] – Arcane Denial is garbage. I think I am going to swap it out in the regular list for [card]Deprive[/card]. That being said, with four players playing cheap spells, two of whom want Erayo to flip, the Soratami is super easy to turn over and it counters each opponent. This is back breaking!

[card]Looter il-Kor[/card] —>[card]Spellstutter Sprite[/card] – Looting is great and this one carries equipment like a champ. I could be convinced to keep LIK as a reanimator support card but I think the two-drop slot can be better served. As for [card]Spellstutter Sprite[/card], she also carries equipment like a champ and is also a very real counter spell in this format. Because it’s so fast, one-mana spells are abundant, and you will counter something in a game with the sprite.

[card]Aetherling[/card] —> [card]Neurok Commando[/card] – Aetherling is a virtual seven-drop blue control finisher. In this format, the point of a blue deck is to support its teammate’s aggro deck and beat the other team down. Note that this does not include a plan to slam a giant fatty after garnering a game’s worth of incremental advantages. [card]Neurok Commando[/card] has shroud and draws cards when it connects. Again, as blocking is not a big part of this format, he’s going to draw you a pile of cards while putting your opponents on a clock.

[card]Frost Titan[/card] —> [card]Inkwell Leviathan[/card] – Combo decks such as the [card]Tinker[/card] decks and reanimator decks don’t have as much time to get online, so this is pulling out the other blue finisher and replacing it with a more combo-friendly card. This could be a worth-while swap of the Puzzle Box list to keep in mind for the next time we look at it. 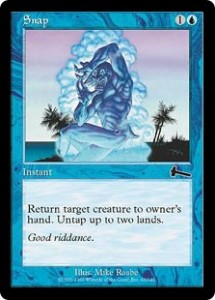 [card]Mulldrifter[/card] —> [card]Snap[/card] – Five mana for a 2/2 flyer that draws two cards is too slow, and three mana to draw two at sorcery speed is also too slow and it only affects you. [card]Snap[/card] highlights one of the very fun features of this format and how being on teams but taking separate turns creates extremely interesting board states. [card]Snap[/card] allows the person casting it to untap any two lands: including your teammates. So on your TM’s third turn, he can play a land, tap all three, you snap an opponent’s creature back to her hand and untap your TM’s land, giving him a total of five mana to work with while setting you opponent back a turn. How sweet is that?! [card]Frantic Search[/card] is an honourable mention that you can consider, but we wont be including in this iteration of the cube.

[card]Shelldock Isle[/card] —> [card]Spellsnare[/card] – Shelldock Isle is awesome when there is a real glut of huge creature to pick up and hide underneath it. Unfortunately for this situation, we have been cutting all of these creatures, so this amazing land gets way worse for us here. Spellsnare is going along with the more cheap counters for the increased number of cheaper cards. You’ll get something.

[card]Deep Analysis[/card] —> [card]Submerge[/card] – Drawing four cards for five mana and three life is great in long games, but not here. This is a card that looks very strange to be in a cube list, but considering that you always have the island and you have two other opponents who will probably have the forest, this spell is almost always free. Again cheap (or better yet, free), is the name of the game!

[card]Meloku the Clouded Mirror[/card] —> [card]Venser Shaper Savant[/card] – Here we have a scared cow being slaughtered. Meloku is an easily splashable, pack-one, pick-one in many, many cubes… but she’s five mana: cut. Venser is not in the regular list because he is expensive, but we are looking for as many counter spells to fit in here as possible to help blue in its ever supporting role.

[card]Mind Control[/card] —> [card]Standstill[/card] – Same notes as [card]Control Magic[/card]. It is worth noting that [card]Mind Control[/card] is very good in the Puzzle Box list precisely because it is a much slower format. You can be sure that it will get something eventually as the game goes on. [card]Standstill[/card] is amazing in Twos. It will draw your team six cards for two mana so long as you have a slightly better board state than you opponents.

These are the cards that tend to highlight the nature of the format of twos. They may not be the optimal substitutions for the list, but they will send you well along your way to the more fun and complex states that exist in this format.

You’ll also notice that the amount of counter spells has been ramped up. I have done this to try and emulate the format that I am familiar with. If you like the play style I described earlier in the post, you could go further and add in a bunch more blue cards, say an extra 15, to make the total size of the cube 275. Some other possible inclusions for that could be the following.

A quick shout out to the Cubism Podcast. These guys are the real Twos gurus out there. They have been playing it for a long time and know the format inside and out. Check out their latest podcast for an in-depth look at Twos. Hit me up on Twitter, @awcolman, or leave a comment below if you have some ideas that could help me and the rest of us out with our Twos project.