Are you all looking forward to the prerelease this weekend? I know I’m not, as Born of the Gods has close to zero implications for Modern. As if it wasn’t bad enough that the prerelease is on Super Bowl weekend.

What everyone does care about is the upcoming Modern banned and restricted list changes that will be announced roughly a week after this article. The general gist among pros is that [card]Wild Nacatl[/card] and [card]Bitterblossom[/card] are the most likely to be unbanned, while [card]Deathrite Shaman[/card] is the most likely to be on the chopping block. Keep in mind that this is nothing more than speculation at this point.

Enough talk about talk about the banned list, though, I’ve already covered the topic extensively in my previous article here. Let’s move on to the main topic of today’s discussion: the MTG finance metgame.

I wanted to cover a topic that I’ve brought up on reddit, and it’s the idea that MTG Finance has a metagame.

What metagame, you say?

The current metagame is to bandwagon-buy cards that are being bought out. For example, one might buy when a card like [card]Summoner’s Egg[/card] is debuted in a Travis Woo brew or when the supply of a card dips below 100 vendor listings on TCGplayer.

Let’s look at the past month’s worth of specs that have spiked to make up the current MTG finance metagame. 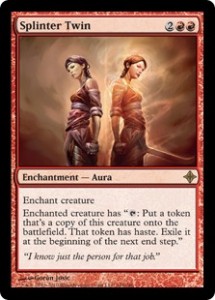 [card]Splinter Twin[/card] is a rare from a set released over three years ago. It is played as a four-of in a tier-one Modern deck. The card doubled over the course of a day from $5 to $10 and has stayed stable since, albeit at low supply of vendor listings. Going into Modern season, the card likely still has more room to grow if there’s yet another shortage on the internet. 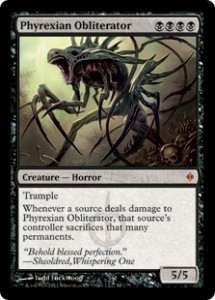 [card]Phyrexian Obliterator[/card] is a mythic rare from over two years ago that sees play in a popular Modern mono-black devotion brew as a two- or three-of. It is a casual favorite because making an opponent sacrifice permanents is dirty. The card spiked on two occasions, culminating in a doubling of price from about $14 to $28. Prices are falling overall because Mono-Black Devotion isn’t actually a competitive deck. 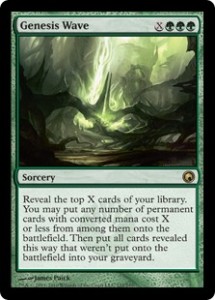 [card]Genesis Wave[/card] is a rare that is three years old and played in Modern Green Devotion as a four-of win condition. The card also sees a good amount of EDH play according to MetaMox.com. Prices have actually gone up from spike levels of $5 to the current $6, suggesting that the demand for the card is real. 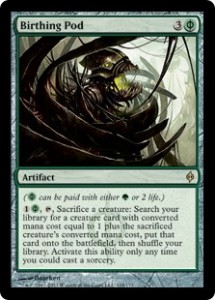 [card]Summoner’s Egg[/card] is getting to the really shady territory in that it’s just seeing play in Travis Woo’s Modern brew as a four-of. Partly due to the price jump that [card]Disrupting Shoal[/card] saw, speculators didn’t want to miss out on another spike and bought the card out. Egg is now a $4 card, up from its previous $0.60 price. I don’t think the card is done dropping from its current price yet, because the deck isn’t any good. 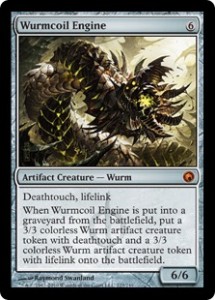 [card]Wurmcoil Engine[/card] is a mythic rare from a set over three years old that is commonly played in Modern Tron as a three- or four-of. It also sees a fair amount of play in EDH. Its price has steadily gone up from under $10 at the beginning of 2013 to the current $23, and the card could go up even further during Modern season.

I hope that this review has struck a chord. If you want to actually come out ahead in MTG Finance, it’s about the fundamentals, not trying to bandwagon into hype. Just because the card goes up some 600%, like in the case of [card]Summoner’s Egg[/card], doesn’t mean that there’s money to be made. You have to find a buyer for the cards before you can sell.

Based on previous cards, there are some general inferences that can be drawn for future speculating.

I hope that this article was informative on the most up-to-date info in the MTG finance world. I continue to be intrigued by the ever evolving nature of the metagame, where to think like the average person is to be behind.

@fyawm     -     Email     -     Articles Tim Enmou Gao is a writer for Brainstorm Brewery and resides in Los Angeles. A Modern-phile at heart, he is currently piloting a RUG Delver. You can reach Tim on Twitter or /u/fyawm on Reddit.
Previous Episode:
The Spike Feed Episode 22 – To Ban or Not to Ban
Next Episode:
Casually Infinite – Understanding EV, Part 2