The Financial Five: Born of the Gods

It’s the first set of 2014! The second installment of Theros block, Born of the Gods, is here, ready to improve your favorite Standard brew.  More importantly for MTG financiers, a whole batch of potential investments are waiting for speculation. Here are my five picks for a beneficial Born of the Gods speculation session (say that five times fast). 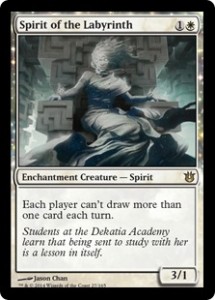 Looks like Wizards of the Coast (WotC) just made [card]Brainstorm[/card] an even harder card to play. Articles, books, and long-winded conversations have discussed how [card]Brainstorm[/card] “should” be played. Now we can just stop playing it all together! I’m joking, of course. Let’s be honest, we know this is to limit the power of [card]Sphinx’s Revelation[/card] in Standard (with maybe a slight kick below the belt to blue Legacy mages). I don’t see its value as much as other Standard staples. Standard control decks have more than enough answers to creatures without bonuses (e.g, [card]Voice of Resurgence[/card]) or protection (e.g., [card]Blood Baron of Vizkopa[/card]).

This are staple cards that [card]Spirit of the Labyrinth[/card] affects in some manner:

With an effect on this many staples, I find a $6 price tag more than reasonable. 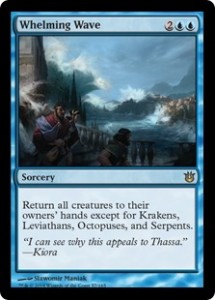 No, I don’t have a kraken or leviathan deck to exploit the last half of this card. What I do have is a global bounce spell that provides tempo and safe haven for the non-creature permanants that take up a large amount of your control deck. I don’t see a home for it right now, but do expect a shift from WotC in future Standard. I know you all want to say that [card]Jace, Architect of Thought[/card], was a powerful card all along and you saw his high amount of play coming, but I don’t believe most of you. When WotC makes a pool of cards for standard, I’d like to think they intend to make half that pool strong at release and the other half strong after the next rotation. It makes sense to maximize profits and keep us buying, trading, and selling cards. [card]Whelming Wave[/card], to me, is a potential future Standard staple. At a bulk price, you might as well believe me! 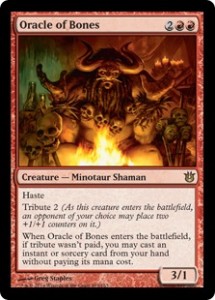 Honestly, not a huge fan of the “punisher” cards that WotC transformed into the mechanic, tribute. This smores-making minotaur will likely make you call a judge for slow play when your opponent that can’t seem to decide how he would like to die. Are you holding two burn spells or are the two cards left in your hand a couple sandbagged lands?

This card is no [card]Hellrider[/card], but it does fit in a variety of red-based strategies, both viable and absent, in current Standard. This card could win you more games than it should due to your opponents’ terrible decision making, and I foresee this oracle finding a home in a red deck near you. When [card]Flesh // Blood[/card] players find out this guy casts both sides of a fuse card, I see a demand of far more than a bulk rare price. It may not cast spells with overload, but I wouldn’t count out an increase in demand, even if the source is primarily from casual players. 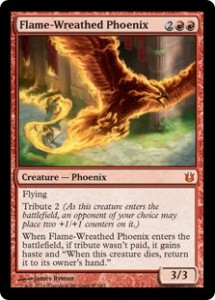 I give to you: [card]Stormbreath Dragon[/card]’s best bodyguard! This is a four-drop flier that can fight through a [card]Nightveil Specter[/card] no matter what your opponent chooses. Opponent doesn’t pay tribute? Sacrifice a creature to tap [card]Desecration Demon[/card] and get in. Opponent pays tribute? Your phoenix will most likely eat a removal spell and clear the way for your dragon next turn. [card]Ash Zealot[/card], [card]Boros Reckoner[/card], [card]Flame-Wreathed Phoenix[/card], and [card]Stormbreath Dragon[/card] could be a commonly occurring curve out in upcoming Standard. Even when [card]Brimaz, King of Oreskos[/card], was spoiled, I still thought Phoenix would be a prime candidate for chase mythic of the set. If it sees play in a deck, I see nothing short of a playset. That said, the potential in a large price spike is something I am willing to invest in. 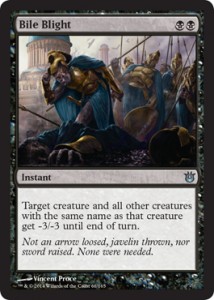 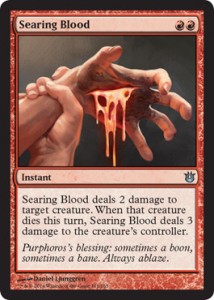 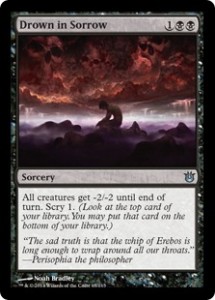 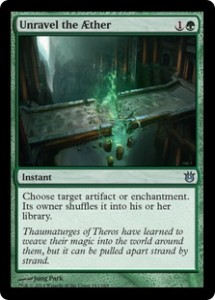 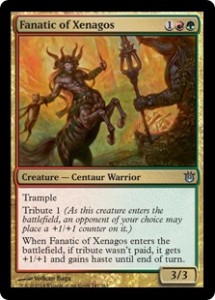 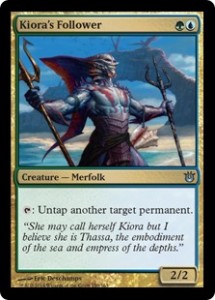 These cards are proof that this set is a miniature tool box for Standard players looking for a format shake up without having to invest in a whole new deck or multiple high-dollar chase rares. I recommend going ahead and picking up a playset, as well as any extras you can pick up for free or as throw-ins. I can’t even recall the amount of [card]Burning-Tree Emissary[/card]s I have turned into [card]Boros Reckoner[/card]s or shock lands.

Though the power of this set as a whole may feel underwhelming, I do trust that WotC has a plan to bring some of these cards from rags to riches during upcoming sets. The cards in Born of the Gods give every format just enough to entice boxes, packs, and singles to sell. The puzzle we must solve is determining what cards will be destined for greatness.

If you plan to travel to Nashville the weekend of February 8 for the SCG Open, don’t hesitate to send me a Tweet or leave a comment to set up a hearty handshake and a free Tap N Sac lifepad to keep track of your card slinging adventures.

As always, thanks for reading.
@TNSGingerAle

@TNSGingerAle     -     Email     -     Articles Houston is the host and creator of Tap N Sac Podcast. He enjoys any format with a healthy community. He usually taps Mountains to have fun and taps Islands to win.
Previous Episode:
Brainstorm Brewery #86 – Bored of the Gods
Next Episode:
Serum Vision: Brewing Methods 201

3 comments on The Financial Five: Born of the Gods