The Puzzle Box: Personalizing Your Cube

Now, that is probably more of a welcome back for me, rather than you, as I’ll have to assume that you have been around these parts more than I have as of late. Last time I showed up here, I was winding up my life in Winnipeg, preparing for a really big adventure across the the ocean in Europe. The trip was fantastic and will actually be the topic of my article today. This will resemble a bit of a travel blog, but it all has its point rooted in building and personalizing your cube. 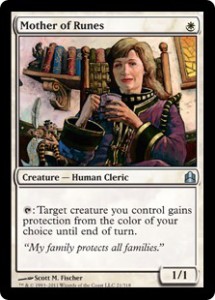 The Start of the Addiction

I’m going to rewind for a moment and talk about the night that I bought my [card]Mother of Runes[/card]. I remember talking to the guy behind the counter and saying, “Mother of Runes is a cube card right?”

He laughed and said, “Of course it is!”

I wanted to have a really cool article to write, either while on my trip or as soon as I got back, which was two and half months ago. I had to think of something I could do for my cube throughout the whole trip. My idea was this: in each city that I could buy Magic cards in, I would buy a foil that matched the theme of that city or country, or however I could justify buying a foil for my cube. Perfect! We were gone for 45 days in five different countries. I should have had my cube totally finished by the time we got back. Alas, this is not how it worked out. 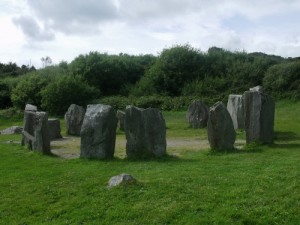 My wife and I landed in Dublin. As soon as we got off the plane, we dropped our bags off at the hostel and headed to a pub for some dinner. (Here I had my first Guinness, but that is a whole other story. In short, in North America I am embarrassed when a friend orders a Guinness at my table. In Ireland, it is the nectar of the gods! From there, we headed to the Guinness factory, which was amazing, but again, a story for another time.)

It was the next day that my wife and I scouted out the local MTG shop. Forgive me, but I forget the name. It was a small, quaint place and the guy working there was wonderful. I told him I was from Canada and what my cube mission was and we dove into their singles binders straight away.

I asked him what he thought a themed cube card could be and he said, “Anything to do with drinking, vikings, or leprechauns.” We dug through Lorwyn looking for a foil [card]Glen Elendra Archmage[/card] to no avail. After a while, he gave up and left me on my own to scour the binders while we chatted.

Eventually, I came across an [card]Oath of Druids[/card], but it was non-foil. I asked him, “Druids are Irish right?” He went on to tell me all about the druids that had lived in Ireland thousands and thousands of years ago and I was sold! I left with a non-foil Oath of Druids that I cannot imagine ever replacing with even a free, altered, foreign foil, because I got it from the land of the druids with all of the stories attached to it. I now have one of the coolest conversation pieces I own in my cube and I get to use it and talk about when ever someone flips something crazy off of it. I can say, “You know that Grislebrand was summoned from Dublin, eh?” and let Magic do what it does best and create an awesome social atmosphere!

I plan on finding little stickers of the flags for each country where I bought cube cards and putting them on the perfect fit over each card’s set symbol to try and further spark the conversation. If you are talented and buy a card like [card]Cogwork Librarian[/card] in Alexandria, you could paint an Egyptian or Minnesota flag on it and have your own Librarian of Alexandria.

Of course, you don’t need to travel to other countries to buy themed cards that you can attach a story to. If you come to Canada during winter, you can get an [card]Icy Manipulator[/card] from Ice Age and tell people how bloody cold it gets here. Or if you go to Florida, you can get a [card]Mother of Runes[/card] next door to your grandmother’s summer home. If you are in Paliano, which is actually a place just a little to the southeast of Rome, you could perhaps pick up a Paliano and find the mayor or any citizen to sign it for you.

Another Souvenir Another Reflection

One of my favorite parts of this whole exercise was that it really got me thinking about what I was seeing. When we were in Paris and went through the Louvre, we went on a tour through Napoleon’s apartment. It was a spectacle! Everything was dripping in gold and covered in the most plush of upholstery.

One thing that my wife noticed was that most of the many, many paintings were of hunting scenes. Not just scenes of men riding with guns and dogs, but the actual moment when the prey that was being stalked was being killed, either by gunshot or dog bite. It was quite violent. As we walked around and heard bits of the tours describing how the monarchy taxed and taxed and taxed and gave nothing back but misery, it occurred to me that that felt very Orhsovish. It was rich and took on the official appearance of religion and benefit for its people, but their actions resembled more the themes of the paintings: death.

After the Louvre, we had planned on going to find the Magic shop to find the card for my cube. There was a perfect choice: [card]Mortify[/card]. It was black and white, it killed creatures and enchantments.  It’s no [card]Vindicate[/card], but that’s okay. To be fair to France, in a small town called Altkirch, where my wife’s family is from and there are no opportunities to buy cards, I would have bought an [card]Eternal Witness[/card]: it was beautiful!

That’s what I have for this installation of the Puzzle Box. There are lots of other souvenir cards to talk about and really, really cool stories and lessons to attach to them. Next time: London, the Graffiti Tunnel, Lambeth, and Thalia.

Thanks for lettin’ me come and hang!