Welcome back to the Puzzle Box!

This week, we’re starting into the next chapter of the life of this cube list. Archetype revisions are a really fun part of being a cube manager. Today I’ll be diving into the artifact archetype and swapping some cards to make it come alive. This deck can be a real contender in your drafts if you decide to include it in your list. I hope you enjoy it!

I recently had an intensive weekend course. It involved spending every night with my class and professors from a Wednesday evening to a Saturday evening. There was lots of reading to do, and it was all seminar/discussion format so everyone actually had to do all of the reading, and do it carefully! 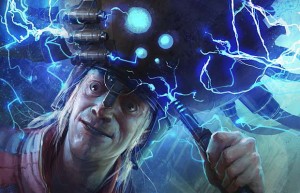 Needless to say, there wasn’t much cubing going on leading up to that weekend. It had been about a month betweenmy last infinity draft. When I finally got back into it, the packs were on my side! BLUE BLUE BLUE! I drafted the ol’ seven counterspell draw-go deck of your dreams. My finishers were [card]Wurmcoil Engine[/card] and [card]Aetherling[/card]. I unfortunately came up against a mono one-and-two drop Boros aggro deck and got slammed! I proceeded to not switch to my aggro midrange deck game two, because I just wanted to see if I could do the impossible. Nope. I forced my opponent to switch decks and I moved to my  more aggro midrange deck. It turned out that his other deck was midrange control with a ton of removal. Down I went again. It was late, so that was the match. I went 0-3 because I did not let the meta tell me what deck to play. Instead I played the deck I felt like playing. I cant say I’ll ever do that again. Drafting for an hour and building awesome decks to get blown out when it really wasn’t necessary was not very fun. But getting a full study in metagaming felt good a few days later. This is really a great format.

A thought occurred to me while drafting that night that pertains to our project here. My draw-go deck came together so well that I thought the packs must have been seeded with blue. So here’s my thought: if you were to infinity draft with the Puzzle Box, you would be seeing 12 of 18 packs. That’s a very high percentage of your cube in use at any one time. Some people could see this as a negative in that the variance of the drafts is going to be very low. Okay, sure. That could certainly be the case. But where other people see a negative, I almost irritatingly force a positive. The positive is that you can very consistently play archetypes that may not have enough support cards in a larger cube.

The next project lined up for the Puzzle Box will be to create archetype packages. These will work by substituting a certain number of cards from the stock list with the archetype package. I am going to be a little bit more liberal with the budget because this is going outside of the initial project. I won’t go too crazy, though. 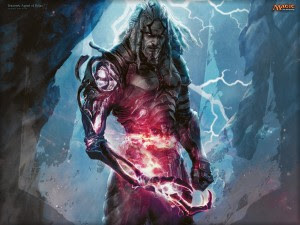 The first and most common unique archetype you see is the artifact archetype. There are so many good artifact-centric cards that it makes it easy to support this one. It is most often seen in powered cubes because of the abundance of fast mana artifacts. For us, the fact that each of the guilds has a mana rock should make up for it.

What this deck is trying to do is be a blue-black control shell with as many artifacts as possible. You’re going to be wanting to grab all of the artifact mana, regardless of its color. Jam down as many many rocks as possible and get out a [card]Sundering Titan[/card], [card]Inkwell Leviathan[/card], [card]Myr Battlesphere[/card], or [card]Sphinx of the Steel Wind[/card]. You could say it is trying to be a robotic green deck. Some people really don’t like that green has to fight with artifacts to be the only ramp-style deck. I think it’s fine. It can be lots of fun to have a battle of fatties. The artifact deck does get [card]Tinker[/card] in this list and green does not get [card]Natural Order[/card], so it may be skewed a little to the artifact having the advantage when it comes together. The other side of the argument is that almost all of green is dedicated to the ramp plan, whereas pieces of the artifact deck will be picked up by other drafters at the table due to the lack of fixing. It balances out nicely.

Some comments on the cards going into the cube. The two Tezzerets are essential. It’s both or none, and if it’s none don’t bother with the archetype. [card]Tezzeret, Agent of Bolas[/card], can go down on turn three with a signet and be swinging for five damage on turn four while providing his own protection. Then he starts drawing you cards for the rest of the game. [card]Tolarian Academy[/card] is much better than TAoB but can lead to some very un-fun games. I would not feel bad leaving this out due to its power level (and cost).

I am swapping out [card]Frost Titan[/card] for [card]Inkwell Leviathan[/card], just as another [card]Tinker[/card] target and something to draw into with TAoB. [card]Academy Ruins[/card], [card]Karn, Silver Golem[/card], and [card]Basalt Monolith[/card] are very good value cards in the artifact deck. They don’t do anything in particular but they make the cut because they do well in other decks and support this one.  [card]Goblin Welder[/card] will be a splash in this deck, but it’s basically a specialized reanimator/[card]Tinker[/card] here.

As for the Diamond and Chrome Moxen: I highly recommend these as an upgrade to the basic cube. The obviously make any deck better, but especially make this deck shine. 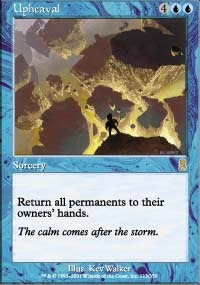 A couple of other cards that I’d like to bring to your attention already in the list are: [card]Upheaval[/card] and [card]Thirst for Knowledge[/card]. If you are fairly new to Magic and you haven’t seen the ridiculous power of [card]Upheaval[/card], contemplate the following scenario: you play all of your mana rocks, tap them and your lands to float 10 mana, play [card]Upheaval[/card] for six leaving four floating, play all of the mana rocks you just picked up with your floating mana, and restart the game three or four turns ahead of your opponent. If you have never played with this card, just jam it in your next blue deck. You’ll see.

Let me know what you think of this new side project, cards I missed for this archetype, or cards I’m crazy to be cutting. Hit me up in the comments section below or you can catch me on Twitter, @awcolman.

As always everyone, thanks for hangin’.

4 comments on The Puzzle Box: Specializing the Archetypes – Artifacts