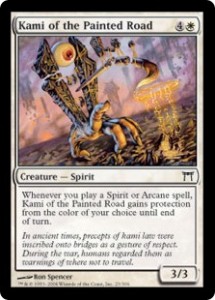 A couple of weeks ago, I introduced you to what is a staple format in my hometown of Winnipeg, called Twos. I also mentioned how card evaluation changes when you are considering this format. I linked to a really good list that has been built to best suit this format, but it is a powered-not-budget list, and that doesn’t quite fit the theme of this column. In this article, I’m going to go through the list and pick out the cards that are especially suited to playing Twos and swap them for existing Puzzle Box list that aren’t ideal. Many of them will be obvious, but others may not be as clear. This way, if you decide to build your cube around the Twos format, you’ll know what a good card for it looks like. Or if you are like me and play mostly one-on-one, you can create a Twos expansion. My main list is 420 cards and I have an expansion of around 35 cards to bring it up to a 450-sized cube. The reason I have the 5 extra cards is a house rule: if you open or get passed a pack with a creature with defender in it, you can opt to take it out of the pack and ask for a new card. I’ll talk more about this later on.

A couple of words about the budget aspect of these swaps. The cards I will be advising to switch will not fall into our $200 budget. However, there are some cards that would be great in a twos list that we don’t have, such as [card]Enlightened Tutor[/card], that don’t specifically affect the multiplayer dimension. I will not be including any of these here. All of the cards that I am advocating for serve a purpose in the multiplayer environment. If you can’t afford them, don’t worry about it. Even if you are just playing with the stock Puzzle Box list, this format will still be a blast to play!

1. [card]Wall of Omens[/card] —> [card]Syndic of Tithes[/card] – a 2/2 for two with extort, this is a Twos dream. It comes in early, swings for two, and causes a four-point life swing with each extort trigger. If your opponents don’t bolt him the first time around…they will the second.

* General note regarding defenders – they are bad in this format. Because you always have two options of opponents to attack, there is a good chance that one of them will not have a blocker or you or your team mate (TM hereafter) will have a removal spell to get an attacker though.

2. [card]Calciderm[/card] —> [card]Kami of Ancient Law[/card] – Calciderm is not really good enough to be in most cube lists and is mostly in the Puzzle Box as a place holder while you acquire better cards. It’s an easy cut for a good Twos card. [card]Kami of Ancient Law[/card], however, does not seem like a good Twos card. This is folly. Because attacking and causing combat damage is so much more prevalent in this format, the effects that all of the equipment have is magnified because they are much more reliable. Also, there are a lot more enchainments in Twos that are really, really good and demand answers. Having access to an extra [card]Disenchant[/card] that can get in for some damage is really valuable here. 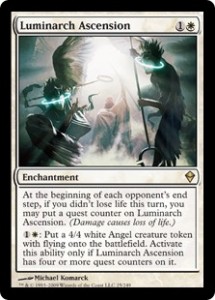 4. [card]Shrine of Loyal Legions[/card] or ([card]Entreat the Angels[/card]) —> [card]Luminarch Ascension[/card] – Shrine and Entreat are simply too slow for this format. Ascension is absolutely bonker-pants! Seeing that they both make an absurd amount of myrs/angels, they seemed like a good swap. Lets look at why Ascension is so good here:

This card wins games on its own: it becomes the plan. Because you have two opponent’s, this counts for two end steps each turn, meaning it activates twice as fast. When playing one-on-one, your opponent can develop his resources for three turns and then just get in some damage when it’s convenient. In this format, opponent’s resources develop at half the speed comparatively and it forces your opponents to make really bad plays. They may send a bolt to your face just to buy an extra turn, or make bad attacks, trading cards they normally wouldn’t just to ding you for one. It’s no coincidence that [card]Cunning Sparkmage[/card] can be found later in the red section…

5. [card]Cloudgoat Ranger[/card] —> [card]Soldier of the Pantheon[/card] – Not much to say here. Five-drops are too slow here, even one this powerful, and swapping it out for a two-power one-drop if just what the doctor ordered.

6. [card]Sun Titan[/card] —> [card]Stonecloaker[/card] – Again, a six-drop that doesn’t just snap win the game is too slow. Even as a reanimation target, there are just better options. As for [card]Stonecloaker[/card], a 3/2 flash flying for three?  Why isn’t this guy in the regular list?  It even lets you re-use your [card]Snapcaster Mage[/card] if you’ve got it. Faster and powerful, that’s the name of the game here.

7. [card]Arrest[/card] —> [card]Path to Exile[/card] – This one is a no-brainer. The only reason Path isn’t in the normal list is cost. If you are moving to Twos, you are going to need faster removal than Arrest.

8. [card]Angel of Serenity[/card] —> [card]Elesh Norn, Grand Cenobite[/card] – Elesh Norn is a one-sided wrath plus team buff plus beater on her own. I realize that this is way out of our budget arena, but she really is much better than the angel in Twos. Its one of those creatures that snap wins the game. Angel does a reasonable impression by removing a pile of their creatures and setting a fast clock. Again, if she’s too much, don’t worry, the format will still be super fun!

9. [card]Gideon Jura[/card] —> [card]Elspeth , Knight Errant[/card] – Gideon is much more a control finisher where as Elspeth plays the aggro/tempo game much better. Seeing as this is an aggro/tempo format, this is an easy swap. 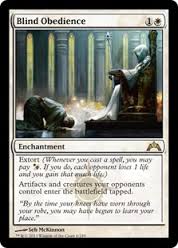 10. [card]Pacifism[/card] —> [card]Blind Obedience[/card] – Again, this is an easy swap. Pacifism is only a partial removal spell. Blind Obedience slows what blockers that do come down a whole turn while providing a way to extort that is not tacked on to a creature thus more difficult to remove. I went in to the virtues of extort in my introduction to this format. Check it out here.

Feel free to scour Gatherer and try to find some other cards in white that would be better than the ones we have (for the Twos environment, of course), and post them in the comments. This is not a heavily discussed format across the internet, so there might still be some gems out there that have been missed.

I need to give credit once again to PIDGEOT on CubeTutor for use of his list as a basis for these articles. Also, all of the guys at Fusion Games in Winnipeg who have been playing this format for years and who introduced it to me. Thanks very much!

Let me know if you have jammed this format yet and what you think of it. I’ll try to get two colors in for the next article, but there is so much new stuff to say about these cards that I make no promises. You can catch me at @awcolman on Twitter if you want to chat about this or anything else Cube- or beer-related.