The Township That Could

Modern season is getting closer and closer. People are preparing for Pro Tour Valentia, the big Modern event before the PTQ season starts.  At the PT, we’ll see the world’s best players brewing all manner of new decks that will inspire entire communities to speculate on cards. Competitive players will need to slowly start picking up playsets of Modern cards for their decks. This is an opportune time for me to talk about a card I would consider a great pick-up, both short- and long-term.

First allow me to tell you something about the way I’ve learned to work in MTG finance. As some of you might know, I wasn’t as knee-deep into finance a year ago from now. I had made some profitable trades, had a good sense of what cards were going to be good and how to grow my collection, but actually profiting from my hobby was not something I considered. Back then I listened to the Brainstorm Brewery podcast “just for fun.” But as I listened, I got more and more drawn into the appeal. Part of that is the joy that I get from watching numbers grow. It’s like gardening, but with numbers.

And because I love seeing my collection and finance account grow, I absolutely despise watching it fall. This causes me to be careful with what I trade for or purchase as “specs.” Hype-driven cards such as [card]Phyrexian Obliterator[/card] or [card]Disrupting Shoal[/card] are known to be mostly artificial price spikes, based on no results or actual demand, and offer very little profit with a high risk. Some opt to gather as many 10-cent rares as they can, hoping one of them becomes a hit. If not, they can just out them all at eight cents each. This is a low-risk investment but with an equally low reward. What I really want to shoot for are the cards that fall into the low-risk, high-reward section. Cards that aren’t going to unexpectedly drop in price (barring influence from Wizards of the Coast through bannings) and only have room to grow, but in a more pronounced fashion than the 10-cent bulk rares. Take a look at the grid I made. 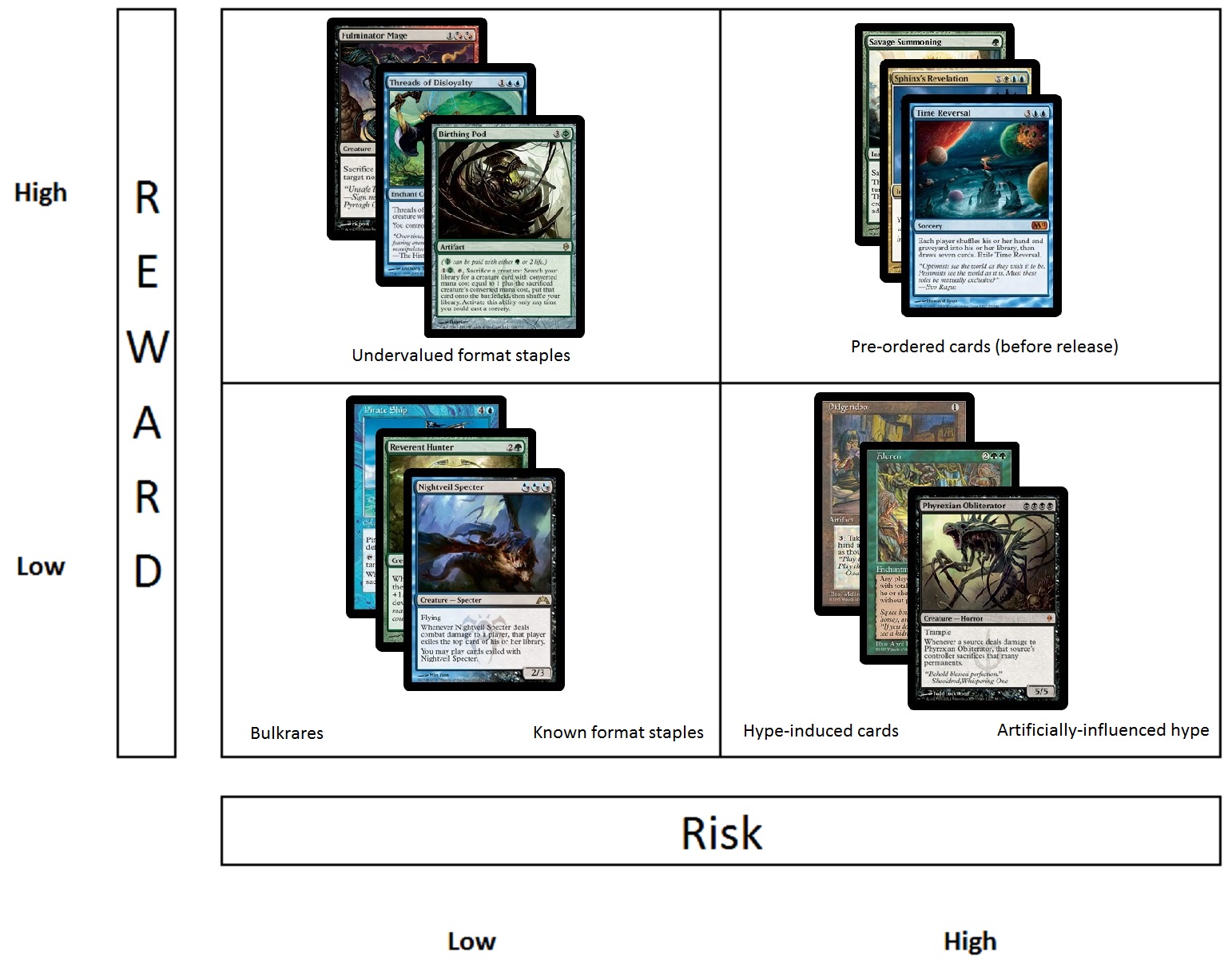 This matrix gives you a clear demonstration of what I mean regarding risk versus reward. Through a few example cards, you can piece together how any given card will fall into these quadrants. Hopefully this grid will be useful to you, and you can also show it to other people if you ever want to explain how a card can be considered a bad spec based on the risks. But after this long introduction, it is time to get to what I really came for to talk about this week.

Does this art remind you of something? Some place? A township of sorts? There’s a link between this image and the matrix I showed you earlier. The card that this image depicts falls under that sweet category I spoke of. Low risk, high reward. 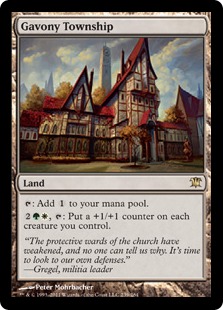 For a card that you can get around a dollar on TCGplayer or 1.50 euros on MagicCardMarket, this land does a lot of work. It is featured in several prominent decks in Modern, mostly variations of [card]Birthing Pod[/card] decks and green-white decks. Its functionality includes resetting your persist creatures, such as [card]Kitchen Finks[/card] and [card]Murderous Redcap[/card], as well as getting aggressive with your [card]Birds of Paradise[/card] as they quickly grow out of control with +1/+1 counters. And because both of these deck archetypes, which each have several variations, run mana accelerants, the Township activations come earlier and more often. Until, of course, the game has been ended by a bunch of 3/4 [card]Noble Hierarch[/card]s and [card]Birds of Paradise[/card].

[card]Gavony Township[/card] is excellent to pick up simply because of its utility and staying power versus its cost. Picking copies up as filler in trade isn’t hard because Township doesn’t inspire a particularly strong price memory. People think of this as rotated Standard fringe card.

And if that wasn’t enough of a reason to acquire some of these lovely pieces of real estate, just take a look at the Magic Online price. I’ve been picking up my fair share of those online as well. 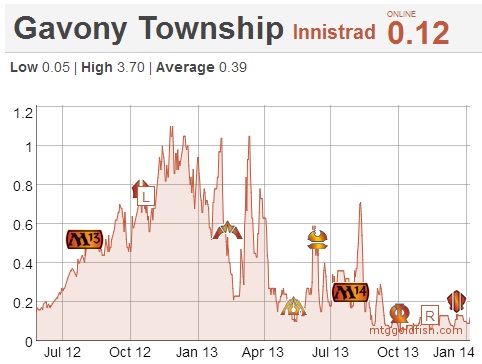 Twelve cents. Do you know how easy it is to double your money on a twelve-cent card? Don’t be surprised if you more than quadruple your investment. Before rotation, the card’s price had gone as high as 1.1 tickets, more than nine times as much as it is now. And the card sees more Standard play than it did Modern..

So there you have it. My off-air pick of the week. I know this article was a short one, but that should make up my 2000-word wall of text last time. I would like to know if you found the above matrix to be useful (and it still needs a name!). Also, if you enjoyed the sweet landscape images, you should definitely check out Jung Park’s work and support him by playing the Zendikar basic lands with his artwork. If you want to contact me, you can do so as usual on my mail [email protected] or hit me up on Twitter @TheMeddlingMage.

@TheMeddlingMage     -     Email     -     Articles Sander van der Zee is an industrial engineering student who specializes in lean-thinking. He stepped back into Magic in 2009 after a three-year break. Picking back up the pieces, he developed an interest in the financial, technical, and community sides of the game.
Previous Episode:
MtG After Hours #9 – EDH World Problems
Next Episode:
The Financial Five: Multicolored Devotion

5 comments on The Township That Could