The Value of a Common Man

Either as Magic players or Magic financiers, we each try to get the most value out of the things we do related to the game. It has turned into a lifestyle for many of us, but we all do it on the most basic levels. Before we got to where we are in regards to spotting potential value, though, we had to learn where to look.  Hopefully, I can add a bit of extra information that will help you eke out a little extra value. Today, we’ll be putting our focus on the most undervalued cards in Magic: the commons and uncommons.

After a draft, most participants only take the rares and foils out of their decks, leaving the rest of the cards (including unsorted basic lands, to the shopkeeper’s dismay) on the table. This includes uncommons such as [card]Bile Blight[/card], [card]Drown in Sorrow[/card], and [card]Searing Blood[/card], just to use some current examples. I’ve seen multiple copies of [card]Burning-Tree Emissary[/card] and even [card]Path to Exile[/card] left behind. Even if the value of a card at the time does not seem worth the effort, that exact mentality causes demand for such cards to go up later when people realize they don’t actually own any copies.

Value uncommons are not the only prime targets for pick-up, however. There are cards that sneak under the radar simply because they hold a price point under ten cents, despite seeing play. I am talking about commons as simple as [card]Ethereal Armor[/card]. With this in mind, let’s play a game.

Rather than the podcast variant where four hosts back-and-forth trying to catch each other unaware on products that hardly even relate to Magic (such as soda cans), I am just here to help you test your price knowledge on the cards of the least appreciated rarity, save for the few all-stars such as [card]Aether Vial[/card] and [card]Path to Exile[/card]. All of the cards shown below have a place in the Modern format, mostly because that’s what I prefer to focus on. 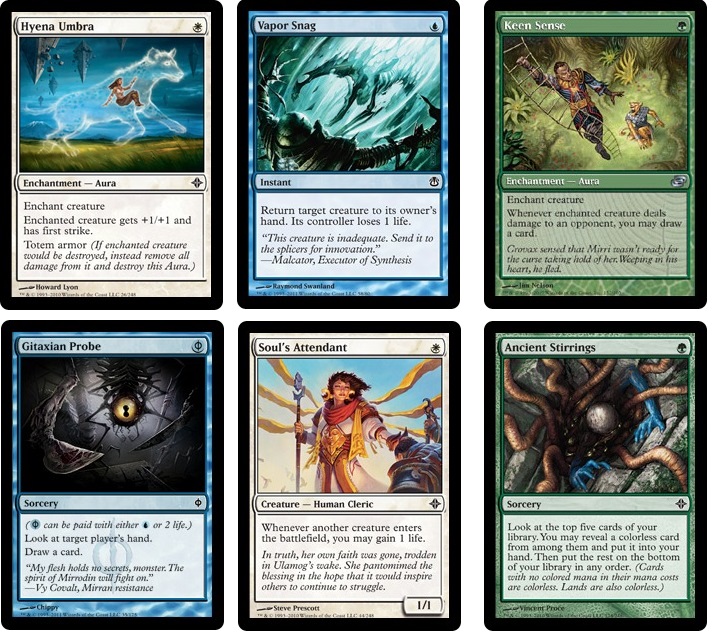 One card from Planar Chaos, two from New Phyrexia, and three from Rise of the Eldrazi. I probably could have chosen a broader selection from different sets, but these were the first few that came to me. Have you made a guess at the highest price yet?

Before I get to showing you the actual prices of these cards, let’s take a look at what these cards all have in common. First off, they all see play in the Modern format and in actual decks. Yes, I am acknowledging GW Hexproof and Soul Sisters as decks. People buy the cards for them and play them in a large enough quantity that it, in my book, makes them real.

Secondly, all of these cards are played in quantities larger than one, which means the demand is automatically doubled or tripled from that of a lonely one-of. It makes sense, of course, but it is worth noting.  Commons are common enough that finding one should not be a big deal. Finding a playset can be more troublesome to many unless it’s from a recent expansion.

Third, all of these cards were once less than ten cents (spoiler! Now you know these cards are worth more than that).  Just think about that when I show you the prices.

All prices are from MagicCardMarket.eu and include only listings with three or more copies. People really aren’t going to get three copies of a common worth 0.25 and pay three times the shipping cost of 1.20 when they could get three copies for a little bit more and only pay that shipping fee once.

All of these cards were previously worth a lot less, from 10 to 25 cents each. Compare that to the price now and we wonder—why didn’t we pick up more copies when we could? Are there similar opportunities right now?  I dare say: yes.

The reason why these commons managed to hit such a low price point has largely to do with the sheer amount of copies that were being opened while the sets were being drafted. When a set is fresh and new, the commons are literally everywhere. People can’t even be bothered to look for them in their own homes because they know they can just fish a couple out of the generous common box at their LGS. People just don’t bother.

Over time, these commons rot away. They seem to have little purpose and then all of a sudden you need four of them. You dredge through your common box and you just can’t find four copies, if any. A lot of people don’t even bother looking through their bulk. They look to the people that have them for sale and just buy four. And let me tell you, the latter happens more than the former. An actual demand starts to grow.

And this is the point where we are at now. We know why some commons manage to demand the price that they do and what their value is upon release. Now it’s up to us to find out which commons show the most potential when a new set comes out so we can pick them up and get them thrown in with every trade we make until we sell them for a buck a piece a couple of years later (when we’ve largely forgotten about them).

I’d like to make a point for two cards that have seen the light of day in Modern, both recently and over a longer period of time. They go by the names of [card]Pillar of Flame[/card] and [card]Ethereal Armor[/card]. 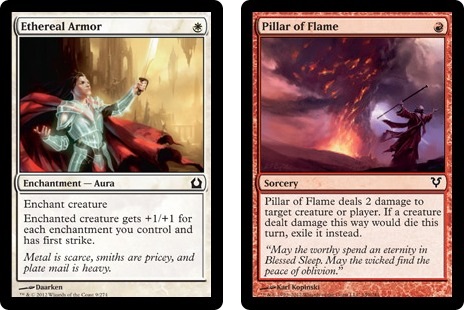 Both of these cards are still under ten cents (0.04 – 0.08), and guess what? They both see play in Modern. [card]Pillar of Flame[/card] is more recent tech to fight Melira Pod, but [card]Ethereal Armor [/card] is the mainstay of GW Hexproof and the reason the deck even exists in the way we know it.

Both Avacyn Restored and Return to Ravnica are fresh on our minds. There is very little reason these cards won’t demand a decent price in a year or two (assuming they’re not reprinted), simply because of the way people treat commons.  If you want my advice, I would tell you to look at what people play or have played and acknowledge cards’ functions. If you find some oft-played but undervalued cards, pick them up. It’s not like you’re actually investing any real money.

That’s it for this installment. If you have any questions or concerns, you can always contact me by mail at [email protected] or hit me up on Twitter @TheMeddlingMage. Have a good financial week and remember to separate the wheat from the chaff!

@TheMeddlingMage     -     Email     -     Articles Sander van der Zee is an industrial engineering student who specializes in lean-thinking. He stepped back into Magic in 2009 after a three-year break. Picking back up the pieces, he developed an interest in the financial, technical, and community sides of the game.
Previous Episode:
Pitt Imps Podcast #58 – PT Born or the Gods
Next Episode:
Brainstorm Brewery #89 – Brews and Ale

3 comments on The Value of a Common Man