You may have noticed that the further we’ve progressed into the Unified Theory’s MDTAS system, the more we’ve discussed the “character” of your deck. This isn’t a coincidence. Every deck needs mana sources, and the rules that help players improve their mana base can be broadly applied. Every deck wants card draw, so resource acquisition is an easy topic to tackle from a general point of view.

However, as we progressed past resource acquisition and into resource selection and utilization, it’s become more necessary to identify the specific goals of our decks. This allows us to make focused card selections that keep each deck functional and fun. So to wrap up our discussion on Answers, it’s important to shine a light back on that topic and make sure our selected answers are genuinely working in service of our goals.

The easiest way to introduce this topic is to go back to the example of [card]Soul of New Phyrexia[/card] from our previous conversation on answers. While[card]Wrath of God[/card] or [card]Path to Exile[/card] are answers that address threats, Soul of New Phyrexia might be better seen as an answer to an opponent’s answer. A tokens deck is most vulnerable to board wipes, so running a card that grants immunity to those sets up an army of 1/1 soldiers, elves, or goblins for victory. 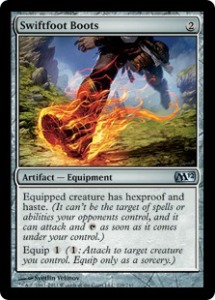 Pause a moment and consider what makes [card]Swiftfoot Boots[/card] an EDH staple. Sure, it can allow an aggro general to swing in a turn sooner, but is that really why it’s so ubiquitous in decks that focus on the commander? I would argue Swiftfoot Boots more important function is being a cheap, near-universal answer to single-target removal. Granting haste is just gravy. What players really want is to know their commander, or another critical threat, is safe from most instant-speed answers.

To retread the most beaten path in Magic scholarship, this is what makes counterspells so immensely powerful and annoying. The “universal answer” isn’t just an answer to threats. It’s an answer to answers too. Consider how often you’ve heard the phrase “I was holding [THREAT] until I had a counterspell to back it up.” So while an aggro deck might have to pick between a removal spell or some kind of defense for their threats, a blue mage can use one slot to cover both. Answers to answers are incredibly valuable.

Taken too far, this “answers to answers” concept can create some of the most powerful and frustrating decks in the format. A prime example would be the “stax” deck archetype. These decks are often helmed by commanders such as [card]Grand Arbiter Augustin IV[/card] or [card]Derevi[/card] and are packed with cards like [card]Winter Orb[/card], [card]Smokestack[/card], and [card]Tangle Wire[/card]. They lock down resources, prevent opponents from getting threats online and make it virtually impossible to answer their own threats. I’m sure you can see why these decks have a reputation for being the least fun in Commander. 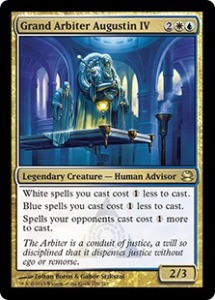 Sorry, dude. No one likes you.

You may have heard similar complaints about decks that rush a threat online, then activate mass land destruction to prevent answers. Watching an unchallenged [card]Jor Kadeen[/card] topple one player after another or a [card]Narset, Englightened Master[/card] play solitaire while being unable to keep lands online just isn’t fun. Mass discard decks like [card]Nath of the Gilt-Leaf[/card] also tend to have a crummy reputation for putting the rest of the table into topdeck mode for the entire game. So aggressively pushing answers to answers in other ways can clearly create bad feelings over time.

Cards such as [card]Painful Quandary[/card] or [card]Sadistic Sacrament[/card] don’t feel that mean when you are putting them into your deck. They feel like answers, and in some situations they really can function that way. In practice, they tend to push their controllers to play more competitively and require judicious utilization to not be incredibly frustrating. Aggressively and preemptively answering everything can produce obvious results. It can win you games. It just might not win you very many friends.

So this brings us back to the goals we’ve set for our decks and the environments in which we expect to be piloting them. Most answers tend to be reactionary, which allows them to be used contextually and politically to your advantage. Holding a board wipe until someone has presented themselves as a major threat is not only wise, but it can also position you as an ally to the rest of the table and garner some goodwill that can be utilized to advance your own gameplan later. This is another great reason to always include answers of some kind in your decks.

Be aware that how far do you go with prevention is going to characterize your deck in the minds of other players and will skew the way you pilot the deck too. Taking prevention to its extremes, we find cards such as [card]Iona, Shield of Emeria[/card] and [card]Contamination[/card], which can lock out opponents and make your deck not only seem more aggressive, but also make it quite hard to play politically. If the rest of your table isn’t expecting to play that competitively, you may find yourself playing archenemy instead of EDH, and rightly so. Don’t play cards that preventative and potent and then complain when the table teams up to stop you. You made those card choices and if playing solo against the table isn’t your goal, then you made some bad decisions during deck construction. 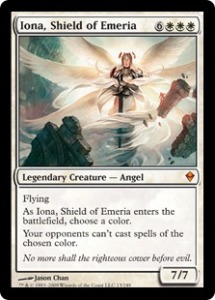 Prevention to the Extreme

If your goal is to be as competitive and aggressive as possible (and there’s nothing wrong with that in the right setting) then select answers that support that goal and don’t be sheepish about including them. But if your regular table is very political, has mixed power levels, or just prefers a friendly game of spellslinging to nuclear war and you want to build a deck for that environment, then make sure to pick answers that fit the zeitgeist. Skew more reactionary and save the preventative answers for the stuff your deck just cannot  answer otherwise.

Deciding what kind of deck you really want to be playing isn’t just about selecting the right threats. Answers have a tremendous impact on the power level and character of your deck as well. You may have built a deck to be “friendly” by skipping certain potent threats and format staples, but selected more aggressive answers that frustrate your friends anyways. You may have tried to build a genuinely potent deck, but failed to identify the threats you need to prevent instead of simply answer. Both mistakes will leave your deck feeling unsatisfying and produce uneven results.

So make sure to run answers, but choose them carefully and be certain they align with the goals you set for the deck. Do your answers support or interfere with the deck’s plan? Are they meeting your expectations for potency and reliability? Most importantly, are you still having fun? If the answer to any of these questions is unclear, don’t be afraid to make some edits and experiment until it feels right again.

Jason is a creative director in the video game industry. When his crippling Commander addiction isn't consuming his thoughts, money, and free time, Jason can be found hiking the beaches, hills, and forests of California or climbing mountains in Utah. If you'd like to contract him as a writer or designer, he accepts payment in the form of EDH staples. He can also be followed on Twitter at @jasonthinks.
Previous Episode:
Weekend Magic: 5/8-5/10
Next Episode:
Brainstorm Brewery #146 – Comet Storm