Imagine for a moment that your commander is an actual living being someplace out in the Magic multiverse. He, she, or it wants something. Can you say what that something is? Does she want to grab a sword and slice someone open? Does he want to make it impossible for his enemies to cast a spell? Maybe it just wants to consume and destroy anything in its path? Whatever it is your commander wants, its your job to provide it when you are building your deck.

In our first discussion on threats, we talked about setting goals and asking yourself a few important questions as you select the cards that will define your deck. What kind of deck do you really want to build? Generally, the answer to that question revolves around your choice of commander. That doesn’t necessarily mean you have to start every deck concept with a commander in mind. Perhaps you picked up an [card]Assemble the Legion[/card] in a trade and it inspired you to build a Boros tokens deck. Maybe there’s a tribal deck like Goblins or Treefolk that you are just dying to play. But unless you are picking a commander  just for the colors, that card is generally going to be your number-one threat. 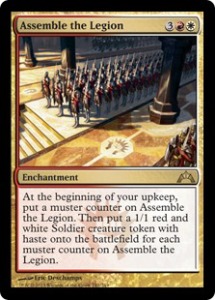 Inspiration… but not your #1 threat

The reason should be perfectly clear. Unlike any other card in your deck, your commander is available any time you have the mana necessary to cast it. Even with the clever tricks we outlined earlier in the series to make sure our mana sources are correct in every deck, we can’t even be certain that a particular basic land is going to be in a given opening hand. So sometimes the randomness of the shuffle keeps particular threats out of reach, but the big boss of your deck is waiting for you in the command zone  as soon as you are ready to produce a threat and advance your game plan.

This unique  availability of your commander is obviously a useful part of picking the threats that will define your deck, but it doesn’t come cost-free. The stacking command tax of two colorless mana begins to add up if you are forced to recast your commander multiple times. Lose your commander to removal or a bad combat phase enough times, and suddenly your number-one threat could be out of reach. So knowing the right time to bring your commander into play is an important part of executing a gameplan.

A cheap, aggressive commander such as [card]Rhys the Redeemed[/card] or [card]Edric, Spymaster of Trest[/card] wants to come online as soon as possible. This type of commander’s goal is to start putting pressure on the board right away and generating card advantage. With a good start, they can force an entire table’s worth of opponents to expend their answers instead of developing their own board states. Picking other threats that align with this strategy can help this type of commander run away with the game and pick up quick victories. 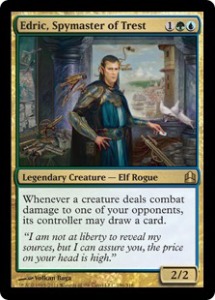 Not every commander wants to be this fast.

However, not every commander should be played that way. One of the most common mistakes I see made by new players is casting their commander as soon as they have the mana, but before their board state is in a position to take advantage of the commander’s  presence.

Even other seemingly aggressive commanders require some consideration before being cast. [card]Aurelia, the Warleader[/card], the commander we discussed in our last article on threats, is a great example. With a converted mana cost of six in colors that do not naturally ramp into huge amounts of mana, she wants to be aggressive, but casting her before you are ready to kill or cripple one of your opponents is generally a bad idea. She wants a suite of equipment or a supporting army waiting when she comes online to maximize the damage she can inflict and minimize the number of times she needs to be cast.

Going back to our initial question helps us determine when to cast our commanders. [card]The Mimeoplasm[/card] wants to eat something awesome in the graveyard, so casting it before there is something delicious to consume is not generally the right choice. [card]Teferi, Mage of Zhalfir[/card] is best used once there’s enough mana available to combo out or lock down the table. And sad to say it, but [card]Oloro, Ageless Ascetic[/card] doesn’t want to be cast at all. He just wants to keep feeding you life every turn and let the other threats in your deck benefit from the value. 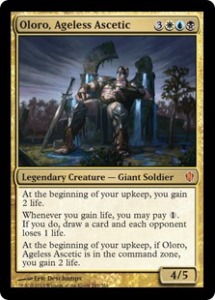 This jerk doesn’t even want to get out of his chair to play with you.

So to refine our question even further, perhaps you should ask yourself, “What kind of board state does my commander want to see when it joins the battle?” Then pick threats and play hands to set up that condition before calling the big boss into action.

Now that we know what our commander wants and when we really want to bring them into play, we can start refining our other threats to maximize their value. Let’s go back to our Aurelia example for an illustration. She wants to enter the battlefield with the ability to quickly eliminate an opponent, so having potent equipment waiting for her is obviously important. Equipping those artifacts can be expensive, though, and Aurelia already costs at least six mana to bring online. So cutting a bigger, more threatening creature in lieu of a [card]Puresteel Paladin[/card] might make Aurelia much faster and stronger. This isn’t synergy in the traditional sense: it’s optimization. The paladin improves Aurelia’s potential to threaten the table even though the two cards by themselves don’t directly interact to create card advantage. 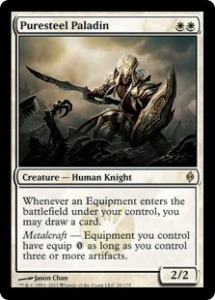 Optimizing our threats also means deciding which “version” of a deck we want to run. Consider [card]Hazezon Tamar[/card]. Some versions of this sand warrior’s deck are meant to play him early, then cast threats that benefit from the tokens he produced. Cards such as [card]Regal Force[/card] or [card]Slate of Ancestry[/card], that care how many creatures you control, are fantastic in this version of the deck. Hazezon’s deck can also be tuned to be a bit more combo-focused. Cards like [card]Food Chain[/card] and  [card]Goblin Bombardment[/card] become much more threatening in this version, allowing Hazezon to produce a massive number of tokens and then shoot the table for the win.

This highlights again why synergy is last in our “My Deck Tickled a Sliver” method for deck building. All of the cards above synergize with Hazezon Tamar’s token generation, and it’s certainly possible to build a hybrid deck that uses all of them, but that doesn’t mean including them all creates the best-performing version of the deck. By picking threats that optimize towards a primary strategy first, we improve each draw and greatly simplify the decisions we need to make while piloting our decks.

So does your deck make its commander happy? Does it have a gameplan? Do all the other threats point the deck in that particular direction? Your number one threat is wasted if the deck doesn’t produce the type of board states that create card advantage when you cast it from the command zone. If you disappoint your commander, the deck will likely disappoint you. So align the other threats in your deck with your commander’s desires and you’ll find that even a budget deck can be fun to pilot—and pick up some wins along the way.

Jason is a creative director in the video game industry. When his crippling Commander addiction isn't consuming his thoughts, money, and free time, Jason can be found hiking the beaches, hills, and forests of California or climbing mountains in Utah. If you'd like to contract him as a writer or designer, he accepts payment in the form of EDH staples. He can also be followed on Twitter at @jasonthinks.
Previous Episode:
Pitt Imps Podcast #99 Worlds
Next Episode:
Always and Never in Magic Finance

One comment on “Unified Theory of Commander: Threats Part 2 – Your Commander”