Welcome back, guys! I have some very exciting things to share with you today thanks to Pro Tour Khans of Tarkir happening last weekend. Many Magic players believe that the Pro Tour solidifies the decks that we will be seeing until the end of January, so based on the results, cards that were previously undervalued spike during and shortly after the weekend. I will analyze the top eight decks, what cards have already spiked from the results, and what cards I think are still undervalued even after the weekend. Let’s go! 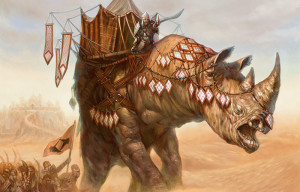 [deck title=Sideboard Cards by the Numbers]

Cards that Have Spiked

Cards that have spiked from the weekend’s results include: 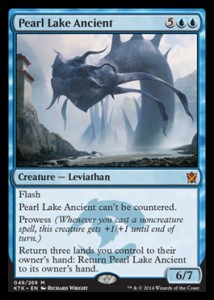 For all the above mentioned cards, if you have extra copies you will want to trade them or sell them over the next few weeks since many of these prices are driven by hype. The prices for many of these cards are going to be going down or stabilizing over the next few months, so by trading or selling extra copies you will be in a position of profit due to the PT results. As Corbin likes to say, “Leave the last ten percent for the next guy.” Many of the above cards are rares that are going to hit the market en masse, which will heavily stabilize their prices or even decrease them. The only exception I may make here is [card]Perilous Vault[/card], since it is from M15—yet no copies were in the top eight, so even this might go down.

Cards that have increased in price based on speculated play that also were not seen in the top eight include [card]Hornet Queen[/card] and [card]Genesis Hydra[/card]. Hornet Queen has see the most upward momentum since M15 was released, going from $1 or less to $5.50 or more retail. Genesis Hydra is also included in the Mono-Green Devotion deck. However, the price is still relatively stable at $3.50, only going up $1 from its low of $2.50.

I believe the [card]Hornet Queen[/card] window has passed for now, since the triple-green casting cost prohibits it from being in many different decks and the buy-in point is too high to make a profit (that is, I don’t think it is going to $11 or more in the near future). I think the window has also passed on Hydra as well. At $2.50 I was a buyer, but at $3.50 or more, I don’t think there is a ton of room for growth. If you plan on playing green devotion in the new Standard, you will want to pick up your copies of both cards now. I don’t think they are going below their respective new prices while still in Standard. However, I don’t think this is where you are going to want to speculate since I believe the risk outweighs the reward. 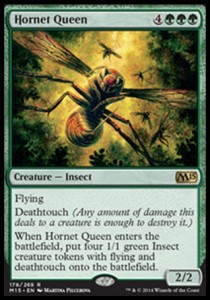 Cards that appeared in top eight lists that have stabilized for now or will be slow gainers through the next few months include:

These are the cards that won’t be changing much in price, if at all, over the next few months. They only stand to increase with more visibility at SCG Opens or GPs, so if you don’t have your copies for Standard, you will want to pick them up soon.

In terms of speculation, all of these cards are from Theros or M15, so holding onto them for now and waiting for the beginning of next year will be important to maximize profits. Getting out too soon will prevent you from realizing some of the higher prices that a few of these cards might reach if they start dominating Standard over the next few months.

All are too expensive to speculate on, though any copies you might have should be kept in anticipation of future price increases.

Looking at the uncommons, the trilands—particularly [card]Mystic Monastery[/card], [card]Sandsteppe Citadel[/card], and [card]Frontier Bivouac[/card]—are now the frontrunners for maintaining a price of $1 or more for their time in Standard. Start packing away as many copies of these lands as possible for future gains over the next year. 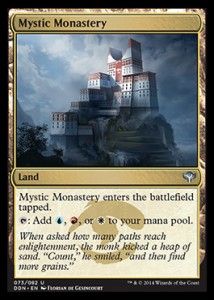 The first card that pops up to me as potentially undervalued is [card]Ajani, Mentor of Heroes[/card]. Three copies across the main deck and sideboard were included in Ari Lax’s winning Abzan deck. Even though this was the only place Ajani appeared in the top eight, he was doing a ton of work on camera and enabled Lax to win against McLaren and Saporito in his final two matches. Not only does Ajani have the PT win going for him, he also has casual appeal as a planeswalker (especially being the first GW walker) and will maintain a large amount of value from that. Heck, Kiora has gone up to $21.50 retail without any results from these top eight decks!

The next card on my list is [card]Anafenza, the Foremost[/card] in foil. She appeared five times across main decks and ‘boards in the top eight, and has real Vintage and Commander playability. I especially like foils if you can get them for $14 or cheaper. I would avoid regular copies for a while since more Khans is soon to hit the market. However, at $2-$3 I would start picking her up for anticipated Standard play in the future.

Another card could be [card]Stormbreath Dragon[/card]—even the pros still aren’t sure whether Stormbreath is necessarily better than [card]Sarkhan, the Dragonspeaker[/card]. It has already started slowly going up from its lows of $13 to $19 and could continue to $20 and beyond once Theros becomes hard to find next spring, especially after Fate Reforged has been released. We’re not going to see [card]Thundermaw Hellkite[/card] prices of $40 or more, since Stormbreath is from heavily opened Theros, but $30 is a real possibility since he dodges all the white removal of the currently popular Jeskai and Abzan decks (and even future Mardu decks). I would not go deep here, but if you plan on playing red in the new Standard, you will want to pick up your Stombreaths soon.

Lastly, [card]Fleecemane Lion[/card] could start doing more work if the Abzan aggro deck starts catching on. At $4 or less, this could be a great pickup in anticipation of winter and spring play.

Even though Sorin, Sarkhan, and [card]Wingmate Roc[/card] were the most popular mythics in main decks by the numbers, there is still a good chance that all of them will drop over the next few months leading into January. More Khans product will be opened, which will increase the amount of copies out there. A good case study here is [card]Master of Waves[/card] and [card]Thassa, God of the Sea[/card]. Both were seen in huge numbers at Pro Tour Theros, spiked hugely after the PT, but then went down and even past their preorder prices once Theros saturated the market over the next year. When was the best time to get out at their highest price? The weeks following the PT. One caveat here is that planeswalkers can buck this trend due to overwhelming casual demand in addition to tournament playability. Again, though, you have to consider risk versus reward—do you want to wait and find out if they’re still good three months from now or do you want to capitalize on what you know was a recent spike in price?

In terms of rares, even though [card]Siege Rhino[/card], [card]Mantis Rider[/card], and [card]Dig Through Time[/card] will be staples throughout their entire lives in Standard, I also have a hard time seeing them maintain their current prices. Like the mythic rares mentioned above, their prices are really going to be hit hard by the continued printing of Khans over the next year. Since they are rares, there is a real possibility that they could be printed in an event deck or similar supplemental product, further dissuading me from wanting to target them at this point. The risks outweigh the benefits here for the top rares from Khans as well.

There is still opportunity in Theros and M15 cards, since print runs are starting to come to a close for these sets and many of the hot staples are stabilizing in price. Any card that you feel is underutilized could be a good pickup if it hasn’t already spiked from the PT results. Slow gainers should still go up slowly, at least until the end of January.

Finally, cards like the fetch lands should be dropped like hot potatoes. All are bound to go down in price over the next few months. Where they will finally end up I can’t tell, you but there is no way that expected value of Khans boxes will continue to be more than $180 over the next few months and next year. Higher priced rares are almost all going to drop and reduce this EV to less than the cost of a box, ultimately fulfilling the laws of supply and demand.

Have any questions or comments on this article or tech we saw at the PT? Let me know in the comments.

Jared is a longtime Magic player who has been slinging cardboard since Odyssey block (back when creatures came into play). He was introduced to the financial side of Magic during Return to Ravnica block and hasn't looked back since. He is a resident of the VA area located just outside of DC. His favorite MTG formats include Limited, Legacy, and Commander. Regardless of format, he prefers making creature tokens. You can follow him on Twitter: @gildedgoblin.
Previous Episode:
Brewing with Khans of Tarkir
Next Episode:
Unified Theory of Commander: Threats