Weekend Magic: 1/2-1/4 (with Discussion of Possibilities from Fate Reforged!)

Until Fate Reforged becomes legal in Standard, we only have the same type of decks to look at until the new set makes its impact. The issue now is whether the Standard decks that exist currently will maintain their dominance, or will new archetypes emerge that make use of recently spoiled cards from the new set?

The first-place deck at GP Colorado, U/B Control piloted by Andrew Brown, certainly has one card that could be added to it: [card]Silumgar, the Drifting Death[/card]. 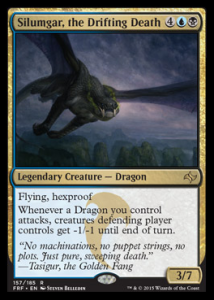 This card has many players excited about its Standard applications since it is great against token strategies in addition to having Hexproof, making it harder to kill than most things. I don’t think you can go wrong picking these up for $0.25 or less. Dragons are a very popular creature type amongst the Magic crowd and the dragons from Fate Reforged will also follow this trend, ensuring that you could still out them later if it doesn’t pan out initially.

Second place was taken by Matt Sperling piloting Abzan Aggro, a deck that we’re intimately familiar with at this point. Again, however, Fate Reforged has given it another possible tool in [card]Warden of the First Tree[/card]. 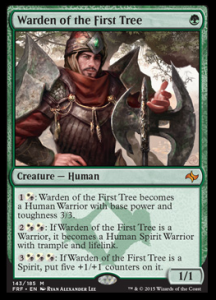 An Abzan [card]Figure of Destiny[/card]? Close, but it is slightly different in several ways, and any one of those differences could exclude it from Standard play. There are so many other options that already exist for the Abzan decks, but Warden’s abilities are certainly powerful and it only costs one mana to cast—this is good for instances where you need to play a Temple on turn one or two. I’ll be keeping an eye on this guy moving forward.

Which cards spoiled so far might be well-positioned in a deck like this? None spoiled so far really stand out to me except [card]Monastery Mentor[/card], which would primarily shine in Jeskai token strategies but could also have a place in Mardu decks. 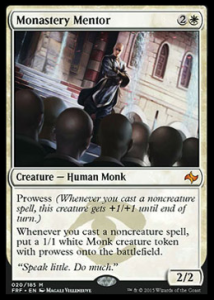 Mentor could take the place of [card]Seeker of the Way[/card] in the Mardu and Jeskai decks, since lifelink can be granted to [card]Butcher of the Horde[/card] and given by [card]Sorin, Solemn Visitor[/card] currently as well. There is no doubt that this card is much strong than [card]Seeker of the Way[/card], and given enough time, like [card]Goblin Rabblemaster[/card, can eventually take over a game with all of the prowess that will be going towards the tokens and Mentor.

But does strength outclass efficiency? Three mana versus two mana is a huge difference. Whether the card explodes in price or drops significantly, [card]Monastery Mentor[/card] is definitely a card to watch out for in the new Standard.

Second place went to Abzan Midrange, which also took three other spots in the Top 8 and four other spots in the Top 16. The story of the tournament was told by the strength of Abzan Midrange, but Makihito Mihara’s third-place Devotion to Constellation build contained four [card]See the Unwritten[/card], a card that could break out in Standard if given the right tools.

If the story of Manila was Abzan Midrange, then the story of Columbus was U/W Heroic. The deck put five people into the Top 16 and took down the event.

Two interesting decks were Four-Color Delve and Four-Color Soul. [card]Soul of Theros[/card] appeared as a playset in both decks, so I will be watching this card very closely over the coming weeks for any sign of a price increase.

No other important trends were seen in Columbus that we haven’t seen already. Let’s get to Fate Reforged already for a shakeup!

Modern, on the other hand, is as diverse as ever. A new deck to appear in a Top 8 spot is [card]Necrotic Ooze[/card] Combo piloted by Garett Young. There is a whole list of cards that should be watched for from this deck:

Even four [card]Pack Rat[/card]s were included in the sideboard. This deck seems like a great metagame choice to combat the [card]Treasure Cruise[/card] decks that have been showing up these days in Modern.

Other notables from the results are the appearance of [card]Geist of Saint Traft[/card] in the Zoo and Jeskai Delver builds, [card]Primeval Titan[/card] and other pieces of the Amulet Combo deck ([card]Amulet of Vigor[/card], [card]Summer Bloom[/card], and [card]Hive Mind[/card]), and [card]Scavenging Ooze[/card] out of the Abzan strategies. Storm also got two spots in the Top 16, which speaks to its power in the new Treasure Cruise format.

Ascendency Combo took down the Legacy portion piloted by Robert Graves. As the new kid on the Legacy block, the Ascendency Combo deck is the real deal that isn’t easily going away. It turned [card]Fatestitcher[/card] into a $4 uncommon and Jeskai Ascendancy itself will eventually go up in price (barring a banning) due to its sheer power in this deck.

Bant Deathblade is something that hasn’t been seen in some time. [card]Geist of Saint Traft[/card] made an appearance in this build, the only card of note. [card]Omniscience[/card] is another card to watch due to third place finish of Omni-Tell.

Grixis Control is now a recurring deck that is putting up results in Top 16s these days. [card]Dack Fayden[/card] appears as a two-of in this deck and is certainly a card to watch moving forward.

That’s it this week. Soon we’ll have Fate Reforged to shake up Standard, and maybe Modern and Legacy, too. Until then…

Jared is a longtime Magic player who has been slinging cardboard since Odyssey block (back when creatures came into play). He was introduced to the financial side of Magic during Return to Ravnica block and hasn't looked back since. He is a resident of the VA area located just outside of DC. His favorite MTG formats include Limited, Legacy, and Commander. Regardless of format, he prefers making creature tokens. You can follow him on Twitter: @gildedgoblin.
Previous Episode:
Conjured Currency #44: The Common Rares
Next Episode:
Pitt Imps Podcast #99 Worlds

One comment on “Weekend Magic: 1/2-1/4 (with Discussion of Possibilities from Fate Reforged!)”