Last weekend brought us Star City Games Dallas, which featured Standard as the main event with a side of Modern and Legacy. Let’s take a look at the results while also bearing in mind that Standard will yet again be shaken up by Dragons of Tarkir in just another week. We’ve got the full spoiler up, let’s see what opportunities the new cards might have in Standard.

Sultai Control took down the event, piloted by Michael Miller. [card]Satyr Wayfinder[/card] does a surprising amount of work in the deck. Not only does it fuel [card]Dig Through Time[/card], [card]Treasure Cruise[/card], and [card]Tasigur, the Golden Fang[/card] from the sideboard, but it also chump blocks early in the game against faster aggro decks. It seems strange to see the Satyr without [card]Whip of Erebos[/card], but the third place Sultai Control was also running the full playset of Satyrs without Whip. This clearly means its inclusion was well-merited.

What are possible inclusions from Dragons of Tarkir that might go in Sultai Control? 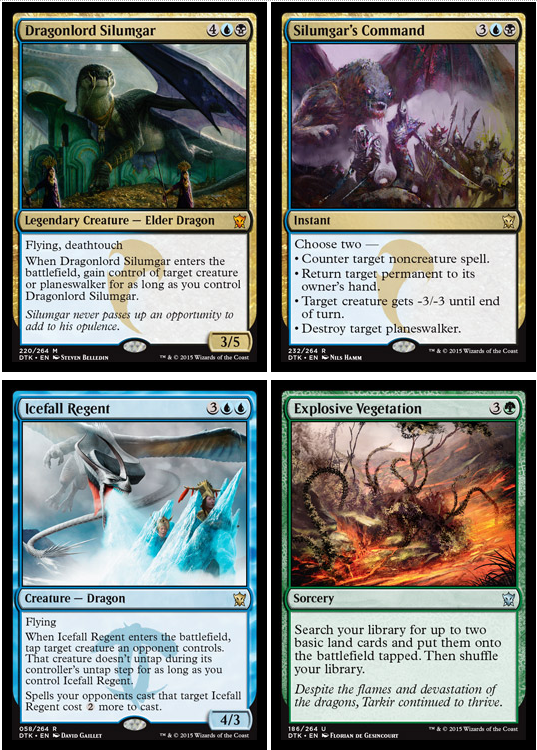 I see all the above cards as having potential, with [card]Silumgar’s Command[/card] being the strongest candidate for inclusion. [card]Dragonlord Silumgar[/card] might be too much mana for the effect, while [card]Icefall Regent[/card] has the issue of only having three toughness. [card]Explosive Vegetation[/card] could be pretty sweet, as ramping up two lands in a single turn is quite powerful. By turn five, you have seven lands on the board and can more quickly deploy a threat like [card]Garruk, Apex Predator[/card] followed the next turn by [card]Ugin, the Spirit Dragon[/card].

Jeskai Aggro took second and fourth place. Which cards from Dragons could make the most impact in this build? 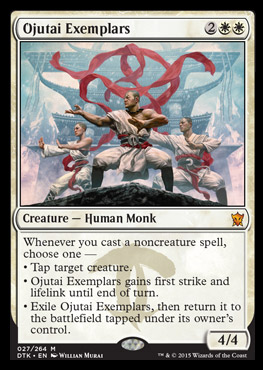 Ojutai’s Exemplars is a card which could find a home in Jeskai Aggro. The deck’s curve tops out at four with [card]Outpost Siege[/card], so taking out a [card]Soulfire Grand Master[/card] or two for some copies of Exemplars might be good. There are just so many options on this card in addition to it being an efficient four-mana 4/4 creature. Even if it doesn’t find a home in aggro, I think we’ll be seeing this card pop up in decklists over the coming months due to its versatility.

Rouding out the top eight were Abzan Midrange, Mono-Red Aggro, Sultai Reanimator, and Jeskai Heroic. Mono-Red Aggro is getting some pretty nice cards in Dragons. 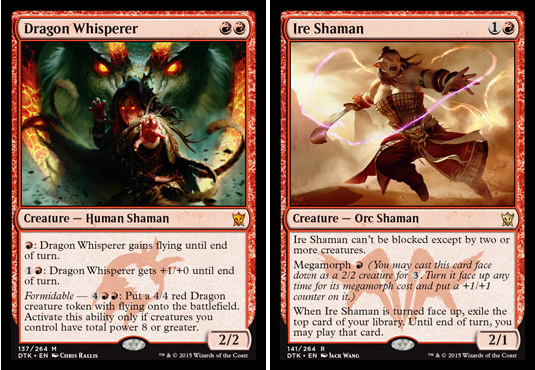 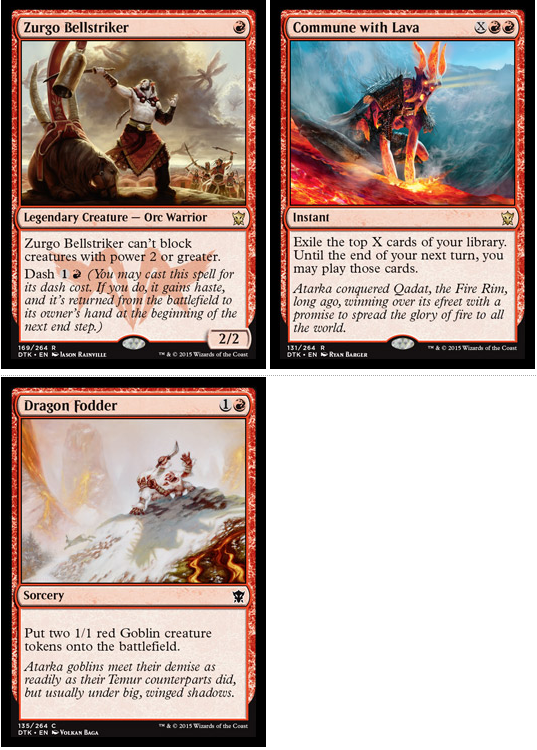 Whisperer gives the deck a nice end game that it’s currently lacking, while also being able to apply pressure in the early game. Ire Shaman is a great beatdown creature that can generate card advantage. Zurgo Bellstriker is an extremely efficient beater that can also be Dashed into play during the late game if you top deck him and need the extra two points of damage.

I like Commune with Lava because it generates a large amount of card advantage, though I admit that Mono-Red Aggro probably won’t play this but G/R Devotion might be able to include this card. Dragon Fodder into [card]Hordeling Outburst[/card] seems good to me; however, Dragon Fodder is significantly weaker than Hordeling Outburst in the late game. Also, the new enchantment that hoses tokens is an issue. 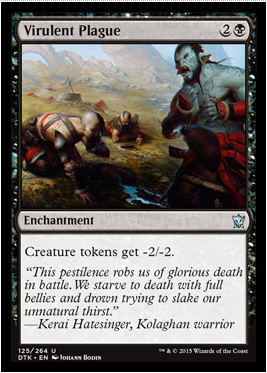 Regardless, I like Dragon Fodder and think that it will have a home, if not in Mono-Red Aggro then in token strategies.

There aren’t any additional cards from Dragons that I’ve identified that would fit into the rest of top 16 (since it is so similar to the top eight), but I like the following cards for Standard and feel they will make an impact: 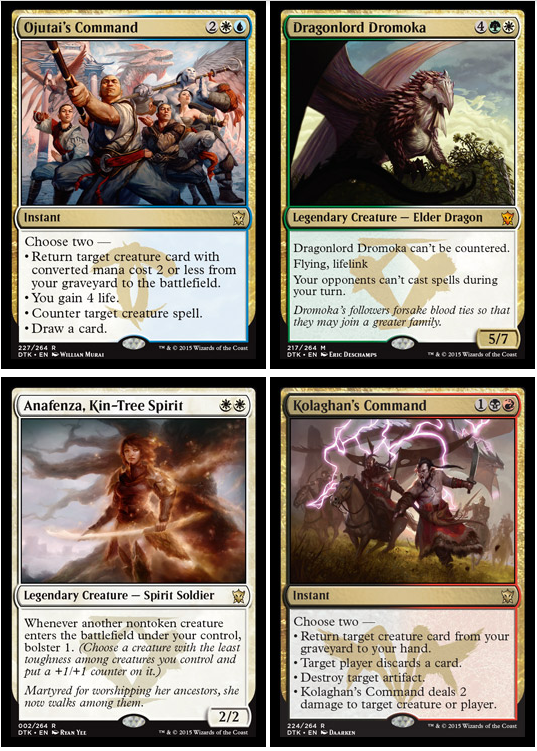 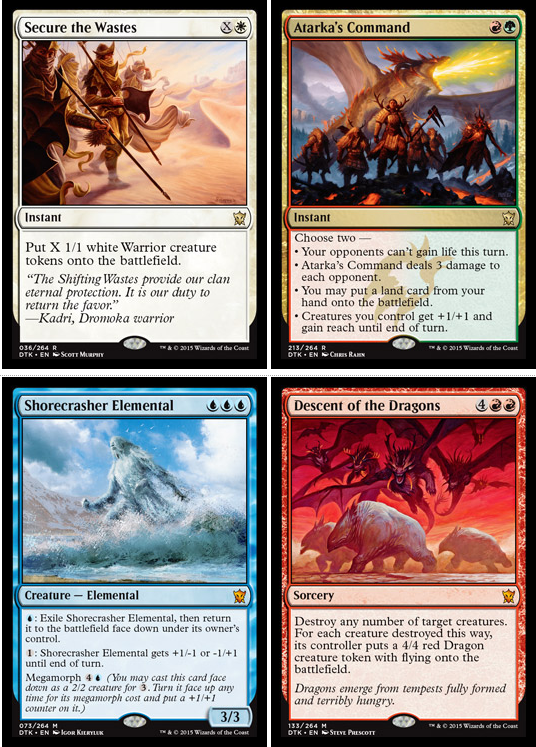 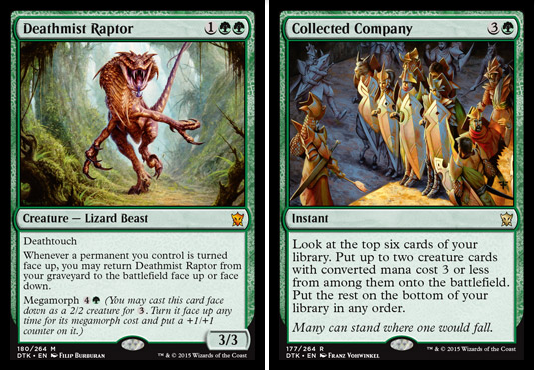 Ojutai’s Command – This card slots nicely as a one-of or two of in Jeskai strategies or possibly a four-of in U/W Control.

Dragonlord Dromoka – It could possibly be included in Abzan strategies. It also could spawn a G/W deck along with other new cards from Dragons.

Anafenza, Kin-Tree Spirit – Seems like a good inclusion in fast aggro decks. Might not have a home now but her future looks bright. Kind of stinks that we can’t use her in token strategies, but oh well.

Kolaghan’s Command, Atarka’s Command – Both commands are undercosted and have efficient effects. Though none of the effects are great singularly, combined together and with the mana cost they can be quite useful in many situations.

Secure the Wastes – This feels like a strong finisher card to me. I realize that it’s not [card]Decree of Justice[/card], but the effect is so similar that it still might see play in control lists.

Shorecrasher Elemental – Mono-Blue Devotion might be revived again due to this card, and it might even have implications beyond Standard (Modern Merfolk, maybe?).

Descent of the Dragons – This card could totally spawn a new archetype or bolster the power of current tokens decks. Either way, I’ll be excited the first time I see this cast on camera for a major blowout if it happens!

Deathmist Raptor – Very efficient green beater than can easily trade up into bigger targets in the late game. I like in G/R Devotion, which has some Morph creatures already that can take advantage of the recursion.

Collected Company – I feel that this card might spawn its own archetype as the effect is really powerful for only four mana. Yes, the creatures need to cost three or less, but if you build a deck around the odds of getting two creatures when you cast this then it becomes much better. The critic in me thinks that this card might just be a little bit too random to be great in Standard but you never know.

Infect and Amulet Combo continue to do well after the Modern Pro Tour in DC. Taking first and second at this Modern IQ, they have established themselves as Modern archetypes that are here to stay.

Looking at the rest of the Top 8, the decks that stand out to me are Sultai Control, R/W Burn, and Merfolk.

One of these decks featured some sweet tech. Yes, that’s right folks: [card]Monastery Siege[/card] tech in the Merfolk list! Analyzing Monastery Siege, we can see why it’s such a great card in Modern. The second mode hoses Burn and decks that have tons of removal, while the first mode gives you card advantage in control matchups where you are the aggressor and need to finish the game quickly. All in all, an interesting Merfolk list that tells us Monastery Siege is Modern-playable.

Rounding out the rest of the top 16 were Burn, U/R Twin, Amulet Combo, and Infect. Nothing new to report in these decks.

Ad Nauseam took down the Legacy event, with Grixis Delver coming in at second place. Grixis Delver contained a one-of of [card]Gurmag Angler[/card] main deck. Ban [card]Treasure Cruise[/card]? Players will find some other one-mana nonsense to play. Delve is that good.

Not a ton of Legacy shakeups this week, but with Dragons of Tarkir on the horizon, there just might be some in the near future. Stay tuned.

Jared is a longtime Magic player who has been slinging cardboard since Odyssey block (back when creatures came into play). He was introduced to the financial side of Magic during Return to Ravnica block and hasn't looked back since. He is a resident of the VA area located just outside of DC. His favorite MTG formats include Limited, Legacy, and Commander. Regardless of format, he prefers making creature tokens. You can follow him on Twitter: @gildedgoblin.
Previous Episode:
Pitt Imps Podcast #110 Mushrooms
Next Episode:
Brainstorm Brewery Episode 139 – Dragons of Tarkir Set Review