Last weekend brought us Grand Prix San Diego and Star City Games: Washington which featured Legacy as the main event, with some Standard and Modern on the side. Let’s take a look at the results.

Magic Origins innovations are abound again! First place this time went to UR Tutelage, a deck based around the uncommon [card]Sphinx’s Tutelage[/card] and the overwhelming mill that the enchantment can generate once the deck’s engine get’s going. The deck only played four creatures in the form of [card]Jace, Vryn’s Prodigy[/card] because at it’s heart it is a control deck similar to the Bant Tutelage fog deck that was featured on camera a few weeks back when Origins first hit the tournament scene. This deck seems to be the refined version, which plays strictly blue and red in order to maximize on removal while being able to continue drawing cards with [card]Tormenting Voice[/card] and [card]Magmatic Insight[/card]. The deck also featured [card]Whelming Wave[/card] and [card]Send to Sleep[/card], along with a single copy of [card]Alhammarret’s Archive[/card] to keep the the card draw engine going. In the sideboard, Fiery Impulse seems good as a pseudo-[card]Lightning Bolt[/card] that can take care of pesky fast creatures if you’re playing against decks like Mono-Red Burn. All in all, I’m sure this deck is pretty miserable to play against but sure seems fun to pilot! 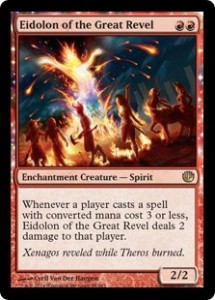 Second place went to Abzan Constellation, an archetype that gets one final [card]Swan Song[/card] before it leaves Standard forever in the fall. [card]Herald of the Pantheon[/card] and [card]Starfield of Nyx[/card] have really pushed this deck’s power up a ton until the fall rotation. Again, we see cards like [card]Eidolon of Blossoms[/card] coming back in order to get the most out of all the enchantments that you need to run along with [card]Doomwake Giant[/card] for board control. This deck seems like great fun to pilot, even though we’re only getting most of the pieces for a few months.

Rounding out the Top 8 were Abzan Midrange, Esper Dragons, Abzan Aggro, Black-Red Dragons, GW Megamorph, and Jeskai Tempo. Key cards from Origins that we’re seeing in these archetypes are:

All in all, I’m really liking the direction that Standard is going! There are both old and new decks aplenty out there, and players have a wide variety of options that they can choose from when deciding which Standard deck they might select for an event. I’m sure that the “top dogs” will make themselves known over the course of the next few months however for now it seems that the possibilities for Standard are endless.

Legacy is still going strong, with SCG still supporting the format with large Legacy opens (even though now they aren’t happening nearly as frequently as before Modern was introduced and hyped up as a format).

Omni-Tell took down the Legacy Open piloted by Josh Pelrine. This deck has continuously been making waves in the format over the past several months, since the combination of [card]Show and Tell[/card] into [card]Omniscience[/card] is unbeatable if allowed to resolve. [card]Dig Through Time[/card] is still seeing extensive play in Legacy in both combo and control decks, so I would continue to expect to see the card since it is super powerful in formats where the graveyard is continuously filled up throughout the game. Also, [card]Cunning Wish[/card] continues to see play in this deck in order to quickly grab any instant from the toolbox sideboard in order to deal with threats both on (and off) the board.

Second went to Jeskai Stoneblade, a prominent deck in the format that has many proven top finishes since the deck is able to control the game so well through both [card]Stoneforge Mystic[/card] and [card]Jace, the Mind Sculptor[/card]. Again, we see [card]Dig Through Time[/card] since it such a powerful card selection spell along with Lingering Souls to create flyers for both an offensive and defensive strategy (depending on the matchup).

Rounding out the Top 8 were Grixis Delver, Temur Delver, Storm, Reanimator, Lands, and Death and Taxes. [card]Vryn Wingmare[/card] is now a solid playset in the Legacy Death and Taxes deck, which shows just how good a flying Thalia can be along with all the other tax effects in the archetype. Take note, and realize that Death and Taxes has yet another great card to add to their arsenal!

Rounding out the Top 16 were UWR Miracles, Shardless Sultai, Jeskai Stoneblade, Grixis Control, Death and Taxes, two Infext, and Grixis Delver. [card]Monastery Mentor[/card] is still appearing in sideboards and main decks throughout the Top 16, so that bodes well for its continued use in eternal formats. [card]Baleful Strix[/card] is still used quite a bit among decks, since it provides a nice way to draw cards and stop bigger creatures from attacking. [card]True-Name Nemesis[/card] is still seeing a small amount of play amongst decks but it isn’t being used nearly as much as when [card]Treasure Cruise[/card] was still legal in the format.

Rounding out the Top 8 were two Mono-Red Aggro, Abzan Delve, Abzan Aggro, Abzan Constellation, Abzan Rally. So, lots of Abzan decks that all are slightly different from each other! Mono-Red is doing quite well these days, since the introduction of [card]Abbot of Keral Keep[/card] and [card]Exquisite Firecraft[/card] have been introduced in Magic Origins. However, Abzan Delve is something new. This deck features multiple copies of cards like [card]Hooting Mandrills[/card] and [card]Gurmag Angler[/card] to take advantage of other cards played like [card]Satyr Wayfinder[/card], [card]Gather the Pack[/card], and [card]Commune with the Gods[/card]. Definitely an interesting take on the Abzan archetype, which proved to do quite well that weekend in a field full of crazy new brews. Abzan Midrange has adapted [card]Hangarback Walker[/card] into the build, which is unsurprising given how versatile the Walker can be, along with [card]Tragic Arrogance[/card] as a way to control the board after dropping a [card]Siege Rhino[/card] or some other such threat. Abzan Rally, yet another take on the archetype, is similarly pretty crazy – the deck operates completely differently from other Abzan strategies due to the fact that you want value creatures like [card]Shaman of the Pack[/card] in order to generate value from [card]Collected Company[/card] and [card]Rally the Ancestors[/card]. I think that this is a deck that could possibly survive through rotation, as long as a decent replacement for [card]Satyr Wayfinder[/card] is included for Battle for Zendikar.

Finally, Jonathan Anghelescu took down the Modern portion piloting Naya Zoo, which is still using Collected Company in order to generate card advantage from cheap creatures off the top of the deck. Rounding out the rest of the Top 8 were two Jund, Goryo’s Vengenace, Grixis Delver, G/W Auras, Affinity,  and something called W/B Hate Bears.

W/B Hate Bears is definitely a misnomer – the only strictly “black” card in the deck was two copies of [card]Orzhov Pontiff[/card], a B/W card that used to be played heavily in the old [card]Birthing Pod[/card] decks of yore but was selected for this deck because of his great ability to kill cards like [card]Delver of Secrets[/card] and [card]Young Pyromancer[/card]. Also, [card]Lingering Souls[/card] was in here for value. Other than this, it was basically a Modern version of Death and Taxes, playing cards like [card]Serra Avenger[/card], Thalia, [card]Aven Mindcensor[/card], [card]Brimaz, King of Oreskos[/card], and [card]Aether Vial[/card]. Definitely an interesting take on Hate Bears, since the usual builds splash green for cards like [card]Collected Company[/card] and [card]Voice of Resurgence[/card].

Mono-White Aggro is the most unique Modern deck I’ve ever seen. Literally every single card in the deck is a one-drop – check out the list to see for yourself how John Gniadek had playsets of everything from [card]Boros Elite[/card], to [card]Figure of Destiny[/card], to [card]Champion of the Parish[/card]. The deck seems to be built around the newly released [card]Kytheon, Hero of Akros[/card] from Magic Origins since the planeswalker is transformed when you attack with three or more creatures, which this deck aims to always complete by turn three. What a totally crazy brew, and one I’m sure we’ll be seeing more of (as long as [card]Chalice of the Void[/card] stays out of Modern sideboards!!).

Dredgevine is another deck we haven’t seen place in some time. This deck uses the power of [card]Golgari Grave-Troll[/card] and other Dredge enablers in order to make use of “free” casts from the graveyard like [card]Bloodghast[/card] and [card]Vengevine[/card]. Also, cards like [card]Grisly Salvage[/card] and [card]Faithless Looting[/card] keep the engine going. Even [card]Satyr Wayfinder[/card] made it into the deck! Looks like Modern is still a viable place for graveyard strategies to do well since [card]Gurmag Angler[/card] and other Delve cards of its ilk continue to be major threats in the format.

That’s all for this week, keep checking back for more weekend Magic updates. As always, thanks for reading.

Jared is a longtime Magic player who has been slinging cardboard since Odyssey block (back when creatures came into play). He was introduced to the financial side of Magic during Return to Ravnica block and hasn't looked back since. He is a resident of the VA area located just outside of DC. His favorite MTG formats include Limited, Legacy, and Commander. Regardless of format, he prefers making creature tokens. You can follow him on Twitter: @gildedgoblin.
Previous Episode:
Money Draught #38 — Simpler Times
Next Episode:
Mono White Tokens – A Whirlwind Weekend