Last week I was excited about Standard Magic.  For the first time in months, it looked like the face of Standard was changing. This is great for the game, because players who have gotten bored and haven’t shown up to the LGS in a while pop in to try out some new brews.  I was ecstatic about the Black Blue Heroes decklist:

This deck showed up at Grand Prix Beijing following the previous standard Grand Prix’s Green Black Dredge list from Ari Lax which I wrote about in my last article.  Yes it looked like things were starting to shake up – until this week, when Standard Magic players shit on my hopes and dreams, and we went back to the SSDD of standard. 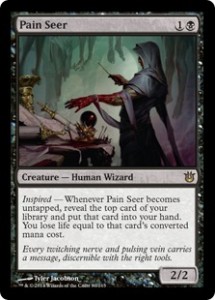 I think what we are beginning to see with the emergence of the Heroic deck and the dredge deck, is that while players continue to brew and try to find new ways to attack the meta-game, post Return to Ravnica rotation archetypes are going to begin to identify themselves.  The B/U heroes deck may be an excellent example of this.  Only 17 of the main deck cards will leave Standard come rotation and 28 only of the 75 will rotate.  That being said, some of the four-ofs that the deck builds around such as [card]Pain Seer[/card] and [card]Agent of Fates[/card] demonstrate their power level in this shell.  This is worth considering as these cards are at very low price points now.  Agent being a bulk rare, and Seer, at $1.70 on TCG Player.

I don’t think it is too early to be considering Standard rotation at this point, and cards that are already popping up in the metagame here and there are worthy of considering as speculation targets now.  [card]Nighthowler[/card] and [card]Herald of Torment[/card] out of the G/B Dredge deck both stand out to me.  While some cards such as [card]Nightveil Specter[/card] may initially appear innocuous, and later creep up in value, some cards are more obviously powerful, such as [card]Desecration Demon[/card].  Speculating and picking up a bunch of copies of either would have been lucrative before Theros dropped.  [card]Desecration Demon[/card] wasn’t heavily sought after prior to Theros, but enough players were trying to break the card that it wasn’t hard to imagine a world in which [card]Desecration Demon[/card] was everywhere.  Good speculators do that, and get in front of the price spikes.  If you make a pick and it doesn’t hit, you don’t want to be so heavily invested that you lose your shirt.

Mono Black ended up winning both the Star City Open and the Grand Prix this weekend.  Both players were maindecking a copy of [card]Whip of Erebos[/card]. I don’t expect the price of this card to fluctuate much if at all. I do like this “tech” better than [card]Staff of the Death Magus[/card].  It may not be as great an answer to the R/W Burn strategy as it is significantly slower than the Staff, but it is infinitely more applicable in almost any other match-up imaginable. 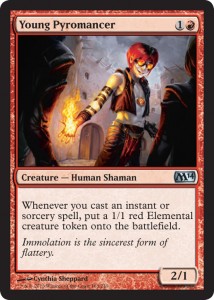 During coverage, Eric Rill called [card]Gitaxian Probe[/card] the best card in Legacy, and fittingly this week FNM promo copies on TCG Player jumped to $10. They sat at $5 a week or two ago when I last wrote about the card and suggested it as a pick-up.  A card that Eric demonstrated works in tandem with “free” spells really well is [card]Young Pyromancer[/card].  As a Standard legal uncommon it hasn’t made much noise, but this is clearly the kind of effect wanted in Legacy.  Its a cheap threat that replaces itself and has excellent synergy with [card]Cabal Therapy[/card].  Between [card]Gitaxian Probe[/card], [card]Young Pyromancer[/card], and [card]Cabal Therapy[/card] one can see how this deck could do some pretty sweet stuff.  I like picking up both foil and non-foil copies of [card]Young Pyromancer[/card] from Standard players who don’t want or need these guys.  They’re throw-ins in trades now, and the financial potential of this card is real.

Last week I saw a few cards in a number of decks that caught my attention I still wanted to mention:

MUD is not a particularly popular archetype, but any time a well known Legacy deck runs anything as a four-of, its worth taking note.  [card]Kuldotha Forgemaster[/card] is a bulk rare.  Cards from all over Scars of Mirrodin block are hitting astronomical price points.  What can be said about this card is, in the right shell, the power level is there.

[card]Phyrexian Revoker[/card] has only been printed once and shows up all over the Legacy landscape, from MUD to Death and Taxes.  $2.50 seems too low for this card.

Finally, Wizards has announced that they will make the 2013 Commander decks more readily available.  Specifically retailers can choose to add two copies of the Mind Seize deck, (the one containing [card]True-Name Nemesis[/card]) per box substituting it for one of the others. In a secondary print-run.  I will be watching what happens to the value of that card as a result.  The other chase rares from the set might be more desirable at the moment.  [card]Toxic Deluge[card] is an aggressively priced sweeper that I’d be snagging copies of in trades right now.

I am planning on heading off to the Star City Open in Dallas this upcoming weekend.  I’ll be hanging out, trading and playing some Legacy on Sunday  If you happen to be out there, don’t hesitate to come say hello.  I don’t know what I’ll be playing at this point; I am quite compelled to play the four color Delver strategy that took down the Open this weekend.  Three and four color Delver decks seem well positioned in the meta game at the moment.  Hopefully I don’t party too hard in the days leading up to the tournament and I manage to show up; preferably on time to register and play. Remember, whatever the focal point of your interaction with the game of Magic, it’s supposed to be fun.

@ElAguacateMagic     -     Email     -     Articles Michael is an avid Magic player who often prefers the trading and economic aspects of the game. He once completed a "Pack-to-Power" project in nine months, finishing with a Beta Timetwister. He travels to Magic events, generally in the Midwest, every few months.
Previous Episode:
Pitt Imps Podcast #63 – Scandinavia’s Finest
Next Episode:
Financial Five: Sweepers