“Well that was fast,” is something I’ve never heard before. Vidianto Wijaya, on the other hand, likely heard that exact phrase entirely too frequently in the last few days. Vidianto ran Red-White Burn this weekend to a fourth-place finish. The burn list is a pseudo-budget list, as most burn lists tend to be, but is also an entirely reasonable deck choice. Outside of the required [card]Mutavault[/card]s, the deck is pretty darn cheap, but it still sees plenty of play, especially on Magic Online.  Unfortunately, I don’t particularly see any room for immediate growth in any of the cards in the deck.

Standard is beginning to stagnate again, and we just haven’t been seeing much innovation.  One list that caught my attention this week was the Black-Green Graveyard list Ari Lax ran at Grand Prix Cincinnati.

This deck seems awesome and I’d love to see Ari publish a primer on the deck at some point. One of the most attractive things about it is that it is ridiculously cheap to build.  Just grab those [card]Deathrite Shaman[/card]s and [card]Overgrown Tomb[/card]s that you have lying around and sleeve ’em up.  Throw in a little bit of [card]Thoughtseize[/card] action and get to cracking skulls!

Don’t have a few [card]Deathrite Shaman[/card]s and [card/]Overgrown Tomb[/card]s lying around?  Well, I believe that you should.  I don’t think the price tag on Shaman will skyrocket in the next week or month, but this guy is a grower, not  a show-er.  Long-term, I can see Deathrite do what [card]Snapcaster Mage[/card] did before him.  We all see the eternal playability in this guy. It’s no question that it will remain an actively-played card long after it rotates, and as copies gradually become more scarce, the price tag should only climb. Shock lands across the board are also a safe long-term buy right now.

If this particular deck picks up in popularity, I like [card]Herald of Torment[/card] and [card]Shadowborn Demon[/card]. [card]Nighthowler[/card] is all but a bulk rare, so it’s potentially a great low-risk, high-reward target.  I have seen similar lists showing up on MTGO daily results, and the fact that Ari bothered to pick up this 75 is a heavy indication that the rares and mythic rares that aren’t seeing heavy standard play right now should be on your radar too. 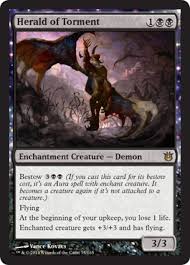 From Born of the Gods, both the aforementioned [card]Herald of Torment[/card] and [card]Pain Seer[/card] seem to have essentially bottomed out and I’m cool with actively seeking out a few playsets in trades right now.  I see [card]Pain Seer[/card] sneak into a handful of deck lists enough that it seems to be several players’ pet card.  Sooner or later, this guy will find a home.

I am really excited about the BUG Control list piloted by Phimus Pan at the Legacy Open this weekend.  Drew Levin had written about the BUG Delver list that has been doing well as of late and described it as “a bit kludge.” I mention this because, first of all, that is an awesome adjective that I intend to incorporate into my vocabulary, but also, it fits the experience that I have had playing the deck quite well.

Following the shift that the Legacy metagame has experienced, BUG has picked up in popularity but moved away from [card]Shardless Agent[/card] and [card]Baleful Strix[/card], which is a shame because both of those cards are incredibly efficient designs and cards that I am quite fond of playing with.  Phimus’s list is the big brother to the BUG Delver list.  It answers it, which is a desirable trait right now, and also eliminates the bipolar tendencies of the BUG Delver list. You no longer have to decide whether you want to play [card]Deathrite Shaman[/card] or [card]Delver of Secrets[/card] on turn one.  Your role is more clearly defined. 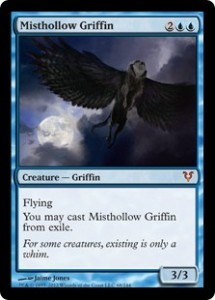 Mono-Green 12-Post made an appearance at the top tables this week as well.  This deck leans heavily on the utility of [card]Expedition Map[/card]. The same is true of many of the “Tron” strategies in Modern.  Although we are talking about a common, with Modern season around the corner, this card could climb up a couple of bucks, which would mean that it would essentially double in value.

Finally, I’ll ask the question, is this [card]Food Chain[/card] deck real?  The world may never know, but enough people believe that this is the case that currently all of the copies of [card]Misthollow Griffin[/card] have been exiled from Star City. The card is currently priced roughly at $1 on TCGplayer.  It will take a significantly higher amount of success to convince me.  But who doesn’t want to make infinite mana and cast their 3/3’s from exile.

Have comments on today’s article or on this weekend’s eventts? Let me know in the comments below!

@ElAguacateMagic     -     Email     -     Articles Michael is an avid Magic player who often prefers the trading and economic aspects of the game. He once completed a "Pack-to-Power" project in nine months, finishing with a Beta Timetwister. He travels to Magic events, generally in the Midwest, every few months.
Previous Episode:
Taking Down a PTQ with Black-White Midrange, by Jonathan Marsh
Next Episode:
Episode 28 – Robot Chicken Control