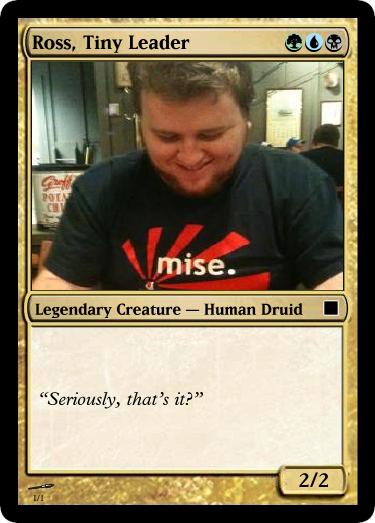 Okay, so last week was a long one, as well as the start of my first meta-series. Today is going to basically be an extended edition of Quick Hits, where we touch on a bunch of different stuff at once (this hides the frequent loss of focus that comes with running WoW1 in the background). Also, I’ve been sick all week, so I’ve been pretty in and out when it comes to cognitive writing ability. This should be fun.

PucaTraders (or at least, the finance-minded ones) are getting smarter. The pricing algorithm that Puca uses is great for mapping steady prices, but it tends to lag behind on spikes. Twice in the past two weeks (fortnight? Can I use that there?), there have been spikes on cards, and by the time their point total caught up, all the wants were gone. The first was Golgari Grave-Troll, who had tons of people wanting them at ~300 points when the price elsewhere was starting to touch $10, but by the time it refreshed, you couldn’t send one off to save your life. The same thing happened with Tasigur after this weekend. As of right now, nobody wants either card for their current point total (675/1055 for non-foil Troll printings, and 1299 for Tasigur). I don’t think the price update times are public, so these people are either:

Seriously, We Need to Talk About Shipping Cards

I’ve received a lot of cards with pretty poor shipping jobs, and it has got to stop. I’ll preface by saying that this applies only to small quantities of cards, since once you’re shipping over 4 cards at once, things get trickier. Let’s go through this nice and easy, and hopefully we won’t have any more problems. 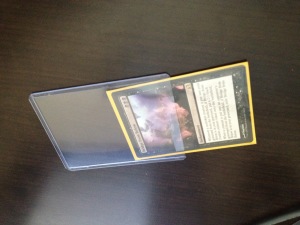 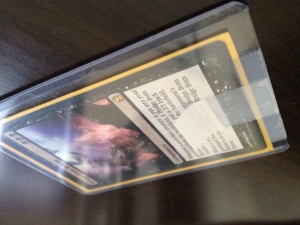 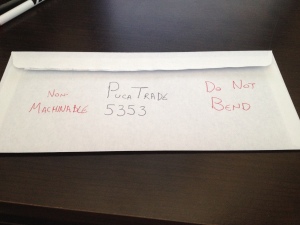 Modern Is Still a Thing

And I am playing it this Saturday! In a PPTQ, even! I am pretty excited, although a little unsure still in terms of deck selection. I have been playing Gifts in Modern for a while (although I have never played the format consistently), but I traditionally want to be aggressive in a “new” format. I don’t expect this particular event to be very large, and I suspect that Gifts is probably better in a smaller setting. My Gifts deck is built around Smallpox, which may be good in these first couple of weeks, although I can’t resolve more than one without already having Loam up and running. My other deck choice, the aggressive one, is a modified version of the Jund Aggro deck I played in my Extended tournament last month:

The upside here is that I am strongly familiar with the deck: some of the numbers that may seem odd here are the results of tuning and retuning. The huge percentage of fetchlands means that our already low land count is functionally going to have a much harder time hitting four than the deck did in Standard. This means we want to draw fewer Aristocrats, since multiples will be painful. [card]Ghor-Clan Rampager[/card] is a fine two-mana card, however, so he got bumped back up to a four-of. He’s probably a better two-mana card than a four-mana card in this deck.

The sideboard is (so far) a deckbuilding experiment for me. Since I am already playing the most effective creatures on curve, I only expect to be sideboarding in or out from that 7 card subset of non-creature spells. Therefore, I want to make sure that the effects I am boarding in or out are similar on curve, but varied in effectiveness towards a certain style of matchup. I won’t be bringing in things like Creeping Corrosion or Thrun, but I plan on Bonfire coming in to replace Abrupt Decay in matches against token decks (and replacing Bolt if they have Jeskai Ascendancy). Ancient Grudge may take three of those currently open slots. Liliana, too. Let me know if you think I’m missing something!

If you haven’t read Travis’s article about his trip to Japan already, you should do that. After you read this, I mean. Well, and comment on this on our site or Reddit. And tweet about it. Anyways, here’s the link (for later).

I’ve built my first Tiny Leaders deck! The archetype is lands, although not having access to any five-color idiot as a general disallows such degeneracy as [card]Inkmoth Nexus[/card] plus [card]Kessig Wolf Run[/card]. My general is the Sultai Placeholder, which is pretty disappointing. I plan on making something more fun to look at to fill the time. Here’s my list:

I’ll be back next week with my results from Modern, some more finance talk, and the devastating emptiness inside that comes with the end of football season.

1If anyone is interested, I found a free Blizzlike program that has Vanilla (Classic) WoW and BC. I would love to have some people to quest with! For the Alliance! Check out Wow-one.com for info.

I've been gaming MtG finance since artifacts were brown. Longtime magic player and TO. Loving husband and father. Cube > Commander.
Previous Episode:
Conjured Currency #47: I Bought a Collection—Now What?
Next Episode:
Episode 72 – A Self-Help Guide to Magic