The Puzzle Box – Larger Inside than Out: Infinity Drafting

“Are you a restrictions-breeds-creativity kind of guy?”

This is the question that our dear community manager, Jason Alt, asked me when I was wondering about what he wanted for the site. The answer was yes, but actually I had no idea how strongly that answer applies. I know that there are people who live outside of restriction and can create, but honestly, I have no idea what that would look like. I am currently working on a post for my blog that discusses this topic exactly, except the whole thing is on it, rather than just a brief intro. The long and short of it: it is larger inside the box, than the box is large. Some smarter people than me quoted this very publicly, so I am going to try and get a little mileage out of it.

“Thanks for the nonsense bro, but what does this have to do with Cube?”

It has everything to do with Cube.

Today we are going to discuss how the idea of “restrictions breed creativity” affects how we use our cube. As I said in User’s Manual, chances are pretty good that you may not have very many people to cube with. I know that this is the case for me much of the time. And if you are anything else like me, which WotC’s data is going to presume you are, you may only have one or two people that can get together to play Magic on a regular basis outside of FNMs.

I have a confession to make. The majority of my cube drafting has been done with only one other person. Does that intro to this article make sense yet? My friend and I were getting a little tired of the disjointed decks that are created by conventional two-man Draft formats such as Winchester and Winston. I will do an article on these draft formats in the future, but I’d rather start with a format that gets your hands on your cube and lets you learn it really well, even with only two people. This goes double for the Puzzle Box, because it is much smaller than the average cube. 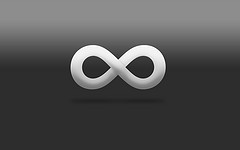 The main points of this format are to make a lot of decisions, do a lot of drafting, build two decks per person, play for a long time, and create a metagame within the match.

It’s called the Infinity Draft because of the shape the packs trace when passing them from person to person. Now that I have got at least 50 of these drafts under my belt, it is also reflective of the infinite amount of time it takes to start and finish the draft. I love it! 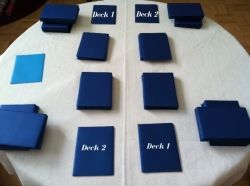 The first passing of the packs is called a “pass.” This means that the pack to your right goes directly across the table to what would be your opponents left. And same goes for your left pack. 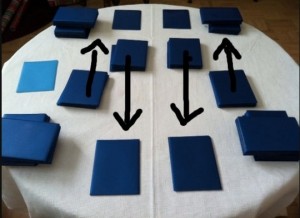 You then make your picks in the same order of right pack to left.

The second passing of the packs is called the “switch.” This is the part that makes sure that the packs actually rotate so each deck sees each pack in the correct order. How this works: your right pack goes diagonally across the table to what would be your opponent’s right, and the opposite goes for the left pack. Each person then makes their pick. 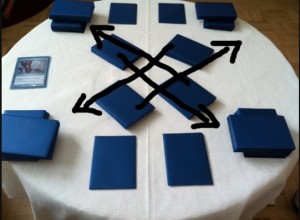 After your next pick, the next pass is the “pass,” the one after that is the “switch,” and so on…

It is very very easy to forget if your last pass was a pass or a switch. We used to use a copy of switcheroo to keep track of which one we were on, but it just got forgotten about and created more confusion. A foolproof way of keeping track of it is simply to count your cards. If you have an odd number of cards, your next move is to pass. If you have an even number of cards, your next move is to switch. Simple as that!

While you’re drafting, just have one person fan their cards out so they can make a quick count. You’ll do this often, I promise.  For each new pack, set aside the previously drafted cards and have the person counting start a new fan. This seems an odd detail to dwell on, but mixing up orders of packs has been bad news. Rinse and repeat until you’ve drafted all the packs. Then, of course, you build your decks.

So now that each person has two decks, you have to decide which deck to play. Here is where the protection from drafting one super deck and using the other as a hate draft pile comes in. At a minimum, you should be playing best three of five, but the format is even better if you have time for best four of seven.

Note: Deck selection and usage rules are confusing at first. They become obvious after you’ve played the format a couple times. They are are very important.

Each person can choose to play either deck for the first game, or you can determine randomly. If you choose your deck, you must switch decks for game two. After game two, you can use whichever deck you choose. If you had your deck randomly decided, you may choose to continue playing that deck in game two, or you may switch to the other one if you want.

The balancing act of the meta works out as such: after two losses, the person who has lost twice may then choose which deck his or her opponent will play in the next game. He or she does not, however, get to know any extra information about the opponent’s decks than is already known.

Here is where we often decide that we want to go best four of seven. This is usually because we just want to keep playing within a match atmosphere and there’s not enough time for another draft.

I cannot tell you how much fun I have had playing this format! You get to touch twelve packs each time you cube. The decks end up being very cohesive, so you really get to see which archetypes are good in your cube and which ones need work. When you move from this to drafting in a normal fashion, the choices become much easier, because you only have to think of one deck, not two. This format honestly feels like you are learning to cube draft at three times the speed of a normal draft because you are doing double the amount in the same amount of time.

There’s a lot of thinking going on in this article, but if you work your way through all of it, I promise it will pay off!

3 comments on The Puzzle Box – Larger Inside than Out: Infinity Drafting