WOTC and Star City Games teamed up to host Grand Prix Miami this past weekend, which will further add to the Standard results we’ve been seeing since Fate Reforged was released. However, we also need to keep in mind that Dragons of Tarkir is right around corner and that Standard again is due for another shakeup. Let’s take a look at the top decks to see which cards performed well.

G/W Devotion was the deck to beat that weekend, with two copies claiming the first and second spots in the tournament. Of course, we all know that Corey Baumeister might not have gotten second without his big brother Brad conceding to him in Round 15. What a great guy, right? Looks like his sacrifice paid off—even though Corey didn’t win the tournament, he still did fantastic.

Let’s quickly compare Daniel Cecchetti’s list to Baumeister’s. Cecchetti opted to play fewer [card]Fleecemane Lion[/card]s and instead focused on [card]Polukranos, World Eater[/card] and [card]Voyaging Satyr[/card], along with including a one-of [card]Temur Sabertooth[/card] for future value from [card]Genesis Hydra[/card]s or other creatures. Corey’s list was more straightforward. He decided not to go with Temur Sabertooth and instead put in an additional [card]Banishing Light[/card] along with the full playset of Fleecemane Lions to control the early game.

[card]Whisperwood Elemental[/card] should definitely be on everyone’s radar at this point. It started out at $4 in January and then spiked to $12 after results started coming in from the first Fate Reforged Standard events showcasing its power. Now, that power has been shown on camera at a GP final match for everyone to see. Whisperwood has proven that it is a Standard powerhouse that is capable of taking down a large tournament. I’m not sure how much more it can rise in the short term, but throughout the rest of its Standard life, there is a good chance it will continue to see play in green-based midrange strategies. Whisperwood is certainly a card to watch moving forward. 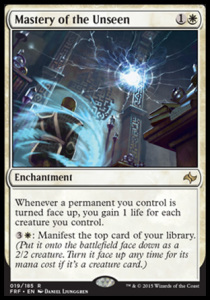 However, [card]Mastery of the Unseen[/card] was the real financial winner from this event. The TCGplayer median price on copies is now almost $5 when it could be had for low as $0.25 last week! If you were one to get in on Mastery of the Unseen before the GP, then you are doing quite well right now. This is definitely a short-term spike, so move any extra copies that you have before the price starts coming back down again. We need to keep in mind that Dragons of Tarkir is just around the corner, so even though G/W Devotion did incredibly well this weekend, that may not be the case another month or two from now. Take your profits and move along.

Rounding out the rest of the Top 8 were Abzan Reanimator, two Abzan Aggro, two Mono-Red Aggro, and Naya Aggro decks. Naya Aggro sounds pretty interesting to me so let’s take a look at that deck first.

One card to look out from Naya Aggro is [card]Shaman of the Great Hunt[/card]. It was played as a four-of in the deck, and could see an uptick of demand based on its various top 16 appearances. Again, we see [card]Outpost Siege[/card] playing a role as a finisher or a card advantage engine, along with [card]Chained to the Rocks[/card] as efficient removal for the best creatures in the format. I imagine Shaman was drawing plenty of cards off the back of pumped up [card]Goblin Rabblemaster[/card]s and [card]Stormbreath Dragon[/card]s. Another interesting inclusion was the [card]Mob Rule[/card] pair in the sideboard, which is great against both token strategies and decks that rely too heavily on gigantic creatures to finish the game for them.

Abzan Reanimator is a pretty stock list that utilizes [card]Tasigur, the Golden Fang[/card] to help create card advantage. There was a playset of [card]Rakshasa Deathdealer[/card] in both Abzan Aggro decks, which makes its price of $1 seem very appealing. A playset of [card]Warden of the First Tree[/card] was included in Boswell’s deck, which focused heavily on creatures. Surprisingly, [card]Wingmate Roc[/card] has gotten pretty cheap recently. It is now sitting around $7, its lowest price to date. Is there a chance that the Roc could back up in price over the rest of the year? I think so, considering how powerful it is if you can trigger the raid ability consistently. Gaining life is just icing on the cake.

Cards to watch include:

That’s it for this weekend. Keep checking in for more updates every week of what happened and what cards you should watch based on results!

Jared is a longtime Magic player who has been slinging cardboard since Odyssey block (back when creatures came into play). He was introduced to the financial side of Magic during Return to Ravnica block and hasn't looked back since. He is a resident of the VA area located just outside of DC. His favorite MTG formats include Limited, Legacy, and Commander. Regardless of format, he prefers making creature tokens. You can follow him on Twitter: @gildedgoblin.
Previous Episode:
Pitt Imps Podcast #109 $900 in Goyfs
Next Episode:
Conjured Currency #54: Draguncommons!