Welcome back to Learning Legacy, brewers. Last time, we took a look at the RUG Delver deck that I decided to champion. I truly believe that to be successful in Legacy, you really need to pick a deck and stick to it. RUG Delver is what I will stick with. This series is dedicated to showcasing my journey out into the Legacy wild: what I learned, how I tried to get better, what worked, and what didn’t. For reference, here is the list that I have been playing.

When you’re just starting out in a format, you’re going to lose. Trust me: I lost a lot. This is normal and you should not let it discourage you. You should, however, learn from it. With this article, I’ll be going over several games I lost while testing and what I learned from them.

“If you learn from a loss you have not lost.” –Austin O’Malley, Keystones of Thought

“I should not have done that.” –Ryan Archer, Said numerous times while testing

Let’s set the scene. We are playing against Belcher. This is a combo deck that tries to get lots of mana and either kills you with [card]Goblin Charbelcher[/card] or storms for a lot and casts [card]Empty the Warrens[/card]. Either way, RUG Delver is very good against this kind of deck. We have early pressure and lots of counter magic. Its game two, our opening hand is double fetch land, [card]Volcanic Island[/card], [card]Delver of Secrets[/card], [card]Spell Pierce[/card], [card]Brainstorm[/card], and [card]Tarmogoyf[/card]. It’s not the best hand, but we have both early pressure and a counter. We are on the play because somehow we lost game one. My thinking is to play the Delver and then follow it up with counter magic and [card]Brainstorm[/card] on the next turn to refuel our hand. So we lead with [card]Volcanic Island[/card] (saving the fetch land for [card]Brainstorm[/card]) and cast Delver.

So what happened? Because I was tapped out, my opponent went for it and was able to cast an [card]Empty the Warrens[/card] for 12 goblins. I lost. The most important thing to do against this kind of combo deck is survive. I didn’t have a free piece of counter magic, so I should have left mana open and played a threat when I could back it up with counters. 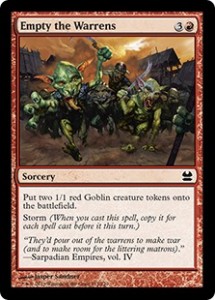 Lesson learned: respect your combo opponents and their ability to go off. Even with a deck full of counter magic, you can still lose. Play slowly and make sure you stick a threat when you are able to.

Next up, we are playing against Blue-Red Delver. Like ours, this is a tempo deck full of cheap creatures backed up with counter spells and burn. This is game one and we trade spells back and forth. I have a Tarmogoyf in play (a 4/5) and my opponent casts a [card]Young Pyromancer[/card]. I have [card]Force of Will[/card] in hand but would have to remove my only other card, a [card]Brainstorm[/card], to cast it. I choose not to.

So what happened? He was able to chain some spells together to make lots of 1/1s. These are enough for him to block the Goyf and eventually find enough burn to make me lose.

Round two, same opponent. I have him on the ropes. I have drawn a lot of my green creatures, which he has a tough time burning out. I play my fourth land (two Volcanics and two Tropicals in play now) to cast another [card]Tarmogoyf[/card] and a [card]Nimble Mongoose[/card]. I am at 16 life and my opponent has one card. I now have lethal on my next turn. 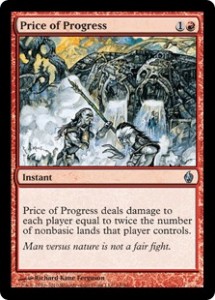 Last example. We are playing against Miracles. Miracles is a UW control deck that plays [card]Entreat the Angels[/card] as a win condition and [card]Terminus[/card] as a one-mana miracle wrath effect. We get our opponent down to three life, mostly on the back of a thresholded [card]Nimble Mongoose[/card] that dodges [card]Swords to Plowshares[/card] all day long. Our opponent is dead next turn if our Mongoose survives. He has been digging and looking for a [card]Terminus[/card]. He’s down to just one card in hand (a [card]Swords to Plowshares[/card]). He needs a miracle. Our hand is a [card]Stifle[/card], a [card]Volcanic Island[/card], and a [card]Spell Pierce[/card]. He has seven lands and goes to untap, upkeep, and draw…he then reveals the [card]Terminus[/card]. 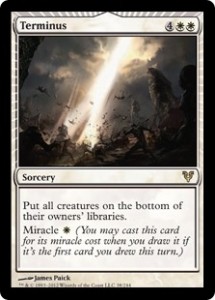 So what happened? Our opponent revealed the [card]Terminus[/card] and then went to cast it for one mana. We could’t counter it because he had too many lands in play. We cursed our opponent for his awesome luck and proceeded to lose as we drew nothing and he controlled the game from there.

Lesson learned: always understand how your cards interact with their cards. In Legacy, there are a lot of different cards. Some of the interactions may not seem intuitive, but this is just another reason to stick with one deck. Miracling a card uses a trigger. With that trigger on the stack, we could have [card]Stifle[/card]d the [card]Terminus[/card]. Our opponent would have drawn it as normal and he would have had to cast it for six mana. We would have been ready with [card]Spell Pierce[/card] and attacked for the win on the next turn.

Thanks for joining me on this little Legacy life lesson. In the future, I will not make these same mistakes. You should also learn from your mistakes to make sure you don’t repeat them. In the above examples, I was just playing practice games, but you better believe this will help me in the next large tournament.

“Sometimes by losing a battle you find a new way to win the war.” –Donald Trump

This Week On: You Can Stifle That?

Did you know that you can [card]Stifle[/card] the living weapon trigger on equipment? This comes up most of the time in Legacy with [card]Batterskull[/card]. When it enters play, the living weapon trigger will go on the stack. If you [card]Stifle[/card] it, they are left without a germ token. This is important for RUG because it gives us much-needed time to attack though without a blocker and without them gaining life. Just be careful, because they can always pay mana and return it to their hand.

@RyanArcherMTG     -     Email     -     Articles Ryan Archer is a PTQ grinder and a Magic financier. When he's not making top eight in a tournament or looking for the next card to spike, he's playtesting as a member of Team RIW or writing articles for BrainstormBrewery.com or MTGinfosource.com
Previous Episode:
Burninating the Field: A PTQ Win
Next Episode:
Conjured Currency #27: Checking in the Closet